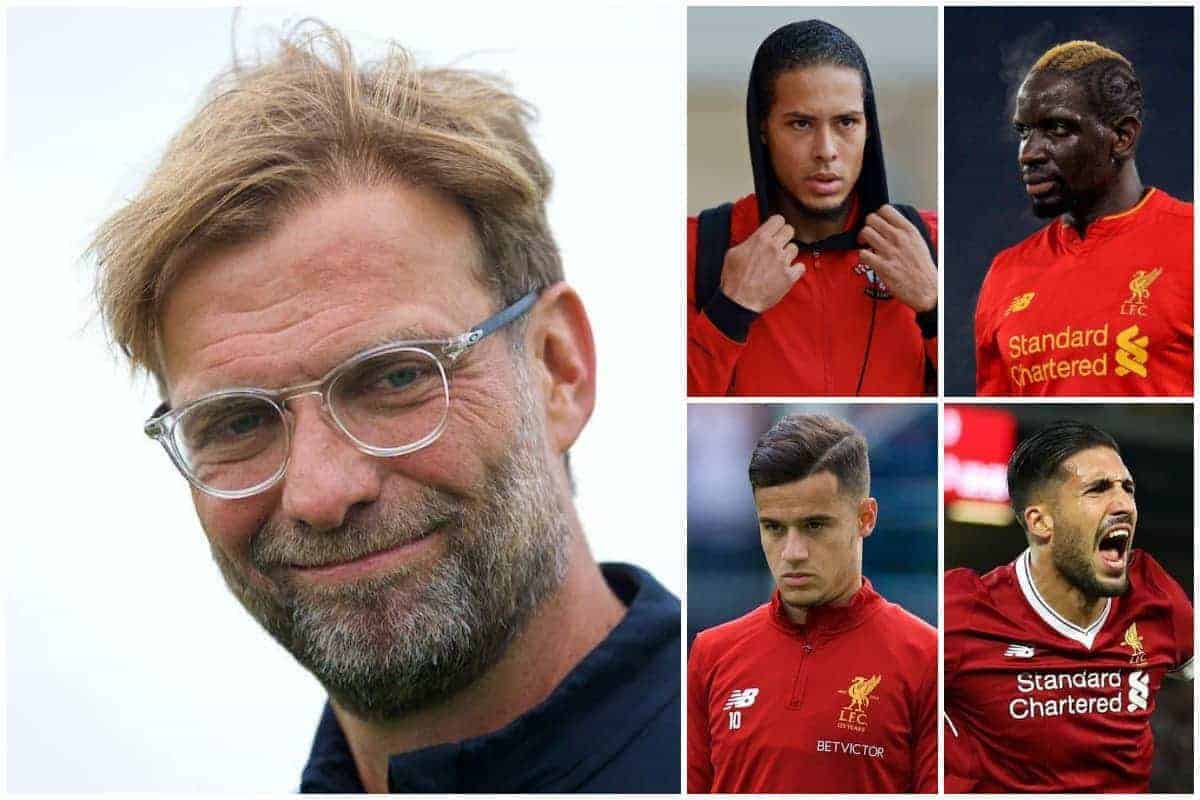 With the summer transfer window closing next Thursday, Liverpool have just one week left to finalise Jurgen Klopp‘s squad for the 2017/18 campaign.

The Reds sealed their place in the Champions League group stage on Wednesday night, cruising past play-off opponents Hoffenheim at Anfield to secure a 6-3 aggregate win.

Speaking after the game, Klopp acknowledged the importance of elite European football in negotiating with prospective new signings, as well as convincing his current charges to stay.

So far, Liverpool have brought in just three players this summer in Andrew Robertson, Mohamed Salah and Dominic Solanke.

Sixteen have left, either on permanent deals, on loan or at the end of their contracts, but that is unlikely to be the end of transfer activity on Merseyside.

The hope is that Champions League qualification will allow the Reds to push forward with bolstering Klopp’s ranks further, with key area still in need of reinforcement before September.

Namely, this could come in the form of Virgil van Dijk, with the Southampton centre-back handing in a transfer request earlier in August.

Announcing his intention to leave the Saints, Van Dijk explained that his push for a move was fuelled by an ambition “to play European football again and challenge for major honours.”

With the Reds now established in the Champions League, they can definitively offer the Netherlands international top-level European football.

However, attempts to convince Van Dijk to make the switch to Merseyside in June muddy the waters significantly, with Liverpool forced to publicly end their interest after a complaint from Southampton.

But with Van Dijk training with the Saints’ U18s, and Klopp still in pursuit of a leading centre-back, a big-money deal could be revived as the transfer window nears its conclusion.

The same could be said of Alex Oxlade-Chamberlain, who is no closer to agreeing a new contract with Arsenal, though hopes of signing RB Leipzig midfielder Naby Keita have faded.

Signing a new centre-back partner for Joel Matip and another midfield option should be priorities for the Reds before August 31—and it could be that some surprise targets emerge.

Meanwhile, there remains considerable deadwood in Klopp’s squad, with no departures either permanent or temporary rubber-stamped since Kevin Stewart‘s move to Hull City on July 21.

Along with Stewart, Lucas Leiva, Andre Wisdom and Ryan Fulton have all been sold this summer, but a host of peripheral figures still remain on the books.

The most high-profile of those is Mamadou Sakho, with the Frenchman yet to secure a switch despite interest from the likes of Crystal Palace, West Brom, Southampton, Napoli and AS Roma.

This is largely due to Liverpool’s lofty valuation of the centre-back, at £30 million, with Tony Pulis’ Baggies now the most likely to match this—but only if Jonny Evans makes the move to Man City.

Elsewhere, Adam Bogdan and Lazar Markovic are also expected to leave the club in the next week, with the former linked with a move to Nottingham Forest earlier in the summer, while Jon Flanagan will have to leave if he wants to play football this season.

Markovic was reported to be on the radar of Marco Silva’s Watford, but no deal has materialised, with clubs from Portugal, Italy and Turkey now more likely to sign the winger.

There is also the small matter of Barcelona’s interest in Philippe Coutinho, with Liverpool having already rejected bids of £72 million, £90.4 million and £114.2 million for the playmaker.

Coutinho is clearly not happy on Merseyside, but this is set to be an open-and-shut case, with the Reds not willing to sell.

There are also likely to be further departures on loan, with talented young winger Ryan Kent fronting the group set to leave on a temporary basis.

Kent produced a series of impressive displays throughout pre-season, earning the 20-year-old a new five-year contract, but he is yet to feature in Klopp’s matchday squad this campaign.

Absent from training ahead of Wednesday night’s clash with Hoffenheim, it is likely that Kent is nearing a loan move, with German sides Hannover 96, SC Freiburg and VfB Stuttgart all interested.

Danny Ward, Cameron Brannagan, Allan Rodrigues, Harry Wilson and Yan Dhanda have also been touted for a season away from Merseyside.

Finally, Champions League progress could see a breakthrough in negotiations over a new contract for Emre Can, with the midfielder’s brace against Hoffenheim underlining his importance to Klopp.

The Reds finally have clarity as the first month of the season edges towards its conclusion.

The hope will be that the final week of the transfer window is a decisive one.