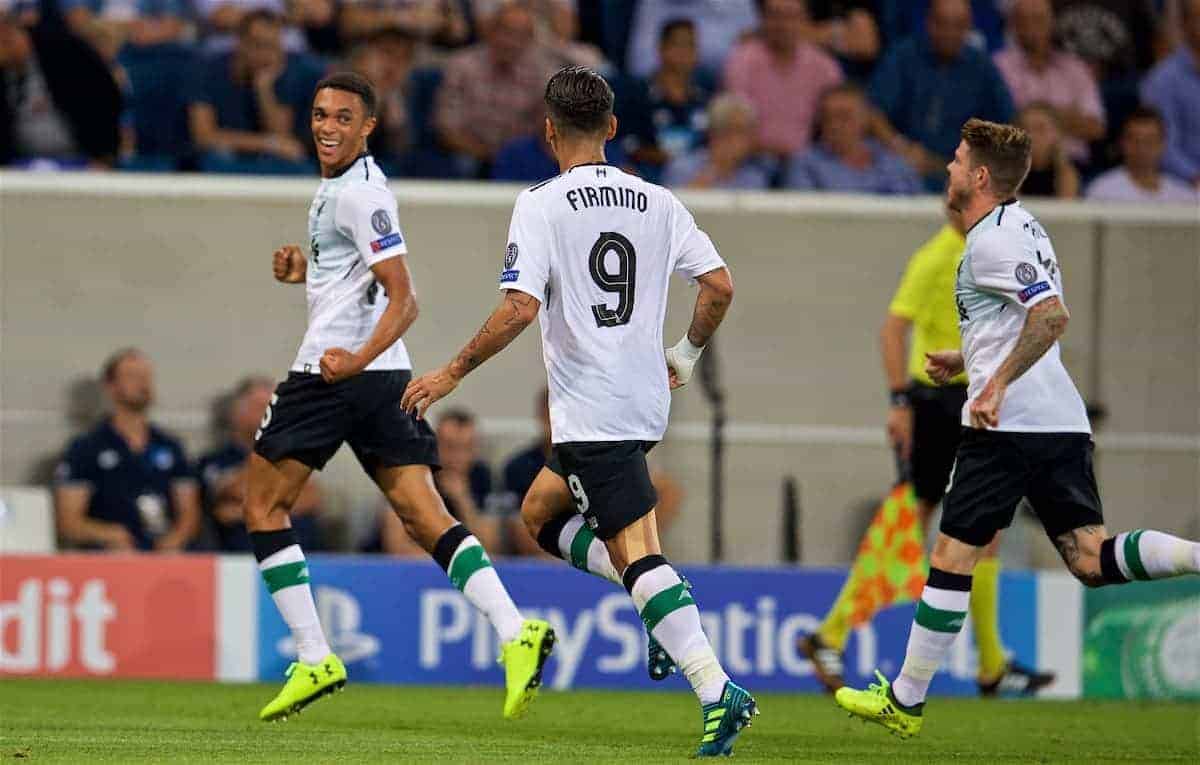 A sensational first goal from Trent Alexander-Arnold sent Liverpool on their way to a 2-1 play-off victory away to Hoffenheim on Tuesday night.

After their frustrating collapse away to Watford in their Premier League opener on Saturday afternoon, a 22-man Liverpool squad headed to Sinsheim for a crucial Champions League clash.

Taking on Julian Nagelsmann’s ambitious Hoffenheim in the first leg of their play-off, the Reds set their sights on a return to Europe’s top tier.

With a clutch of key players sidelined through injury, Klopp’s hands were tied regarding his team selection, but Mohamed Salah, Sadio Mane and Roberto Firmino, taking on his former club, were among those to start at the Rhein-Neckar-Arena.

Heading into the clash as favourites, Liverpool will still have been wary of Hoffenheim’s threat, but ultimately turned in a composed display away from home.

Liverpool started arguably the more confident side in Sinsheim, but were still plagued by a shaky defensive effort, with Dejan Lovren particularly poor.

The Croatian had already made a glaring error in the six-yard box when he conceded a penalty on the 10-minute mark, but fortunately, Simon Mignolet was on hand to bail him out and deny Andrej Kramaric’s tame spot-kick.

Klopp’s side had few clear openings in the first half, but Salah found himself one-on-one with Hoffenheim goalkeeper Oliver Baumann on the charge but sent his right-footed effort wide.

But with Mane brought down by Ermin Bicakcic when carving his way through the defence, up stepped Alexander-Arnold to send a 25-yard free-kick low into the bottom corner to put his side ahead.

This gave Liverpool a much-needed lift, and Lovren almost grabbed a second goal for the away side, but his header drifted wide as the whistle blew for half-time.

Both sides came out of the blocks fast after the break, with Firmino denied from point-blank range after Mane wriggled through brilliantly on the left flank.

They were still required to hold firm at the other end, however, and former Arsenal midfielder Serge Gnabry had the ball in the back of the net after a smart turn, but the German was ruled offside.

Klopp was dealt a blow just after the hour mark when Jordan Henderson was brought off with a suspected injury, with vice-captain James Milner taking his place.

A smart pass from Firmino after a quick free-kick sent Milner through with just over 15 minutes to play, and the 31-year-old’s cross was deflected in by Havard Nordtveit to make it 2-0 to the Reds.

Dominic Solanke replaced Firmino late on to make his Liverpool debut, but it was Hoffenheim substitute Mark Uth who struck next, ensuring a tasty second leg at Anfield next week.