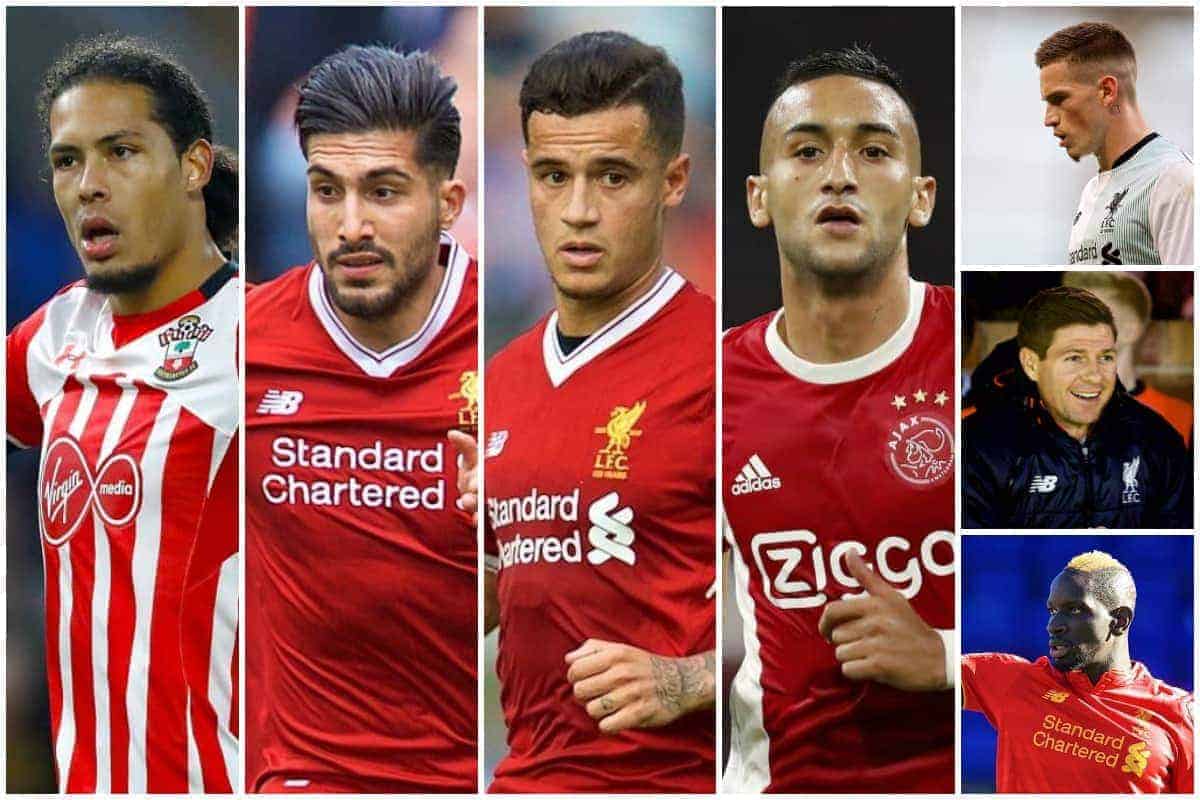 We round up the latest Liverpool transfer news and rumours on Monday, as the Reds prepare for their Premier League opener away to Watford.

Jurgen Klopp‘s side will travel to Vicarage Road on Saturday to begin a long-awaited campaign, following a rigorous and productive pre-season on the road.

With the first leg of their Champions League play-off against Hoffenheim to come three days later, and three more fixtures to come before the end of the month, the Reds will be busy.

And the same be expected off the field, as the rumour mill continues ahead of the transfer deadline on August 31.

The Reds’ pursuit of Southampton captain Virgil van Dijk has been one of the dominant headlines of the summer throughout the Premier League, but it is still no closer to resolution.

Both Van Dijk and the Saints are digging their heels in as they look to navigate a difficult standoff in Hampshire, while Liverpool are forced to wait in the wings.

And addressing his current options at centre-back, it seems that Klopp is content to wait for his priority target, rather than turn elsewhere.

“Look out there and tell me five that would make us stronger. Five. Then you win a prize,” he said.

“It’s difficult how it is. We have four, I don’t think we need more. In the moment I’m fine.

“We are open until August 31. We cannot force the things and we would never get a centre-back just [for the sake of it].”

Juventus Admit Defeat in Can Pursuit

Another saga continuing beneath the surface at Melwood is the ongoing concern over Emre Can‘s contract talks.

The German is yet to put pen to paper on an extension to a deal that expires in 2018, despite talks between the club and his representatives spanning months.

This issue has been exacerbated by the interest of Serie A giants Juventus, who have been regularly reported to be interested in signing the 23-year-old this summer.

But according to the Guardian‘s Marcus Christenson, Juve CEO Giuseppe Marotta has admitted “they are unlikely to be able to sign” Can before the end of the transfer window.

It is unclear, however, whether this is due to Liverpool’s hardline stance or the imminent announcement of a new contract.

The looming threat of Philippe Coutinho‘s departure could have been more damaging ramifications than Can’s, with the Brazilian the subject of major interest from Barcelona.

While reports in Spain, France and England continue to undermine each other in their claims that Coutinho will or won’t leave Anfield, it still remains an issue for Klopp.

Barcelona have already seen their initial £72 million bid for Coutinho rejected out of hand, and are expected to return with an improved offer following Neymar’s big-money departure to Paris Saint-Germain.

And according to Sky Sports, “Coutinho would like to move,” but only “if a deal can be done amicably with Liverpool,” with the No. 10 determined to “not rock the boat at Anfield.”

If French publication Le Parisien are to be believed, PSG are also eyeing a deal for the 25-year-old, to join his compatriot at the Parc des Princes.

EDIT: The Times claim that Barcelona are preparing a £120 million bid.

Liverpool have already loaned out a host of young players this transfer window, with more likely to follow before August 31, including winger Sheyi Ojo.

German publication Kicker claim that Ojo could be followed through the Anfield exit by two fellow academy talents in Ryan Kent and Ben Woodburn.

They suggest that newly promoted Bundesliga side Hannover 96 are interested in signing the duo on season-long deals, with Reds representative Julian Ward assessing their facilities last week.

It is highly unlikely that Liverpool will part ways with Woodburn, given his prominent role under Klopp, and the manager has recently intimated that Kent would stay this season, too.

“Last year he developed unbelievably well and this pre-season is completely different to last pre-season, he’s completely showed up now,” he enthused.

No Approach Made for Ajax’s Ziyech With Coutinho seemingly edging towards a move to the Nou Camp, if not now then next summer, a raft of alternatives have already been suggested.

Barcelona trio Andre Gomes, Ivan Rakitic and Rafinha are among those along with, bizarrely, West Ham United’s Manuel Lanzini.

And over the weekend reports from Morocco claimed Ajax midfielder Hakim Ziyech was being lined up as a replacement, with the 24-year-old in fine form in the Netherlands last season.

But according Dutch journalist Mike Verweij, of De Telegraaf, Liverpool have not made an approach for the Moroccan, and Ajax would not be willing to sell.

It remains one to keep an eye on if Coutinho does leave Merseyside this month, however.

Gerrard Believes Klopp Has “Cards Up His Sleeve”

The tone of Liverpool’s transfer window has shifted from sanguine to sombre in recent weeks, with desperation to holding on to Coutinho eclipsing hopes of signing Van Dijk.

But Steven Gerrard, who has begun his new role as the Reds’ U18s manager this summer, still believes there is time for Klopp to round off a successful summer.

“In pre-season, they have looked very strong and with three weeks to go in the window, I wouldn’t be surprised if Jurgen has got a couple of cards up his sleeve,” he told BT Sport. “He might bring a couple of big signings in.”

Here’s hoping Stevie’s inking is correct, as the Reds’ progress in 2017/18 depends on further additions.

The failure to land the signing of Van Dijk ahead of the Reds’ trip to Vicarage Road is certainly a troubling one, as Klopp prepares to begin the campaign with just four senior centre-backs.

Beyond Joel Matip, Dejan Lovren, Ragnar Klavan and Joe Gomez, the German has few other options to consider, but Mamadou Sakho is still on the books at Liverpool.

And ex-Reds defensive midfielder Momo Sissoko believes his exile is an oversight, telling ESPN that “Mamadou’s commitment and leadership should be an asset for Klopp.”

“I don’t know what happened between them,” he added, “but I think Mamadou could have been an asset to the defence and the squad as a whole.”

This was echoed by John Arne Riise, who took to Twitter to say: “My guess is that Sakho will through hard work and commitment turn it all around and play for Liverpool this season.”