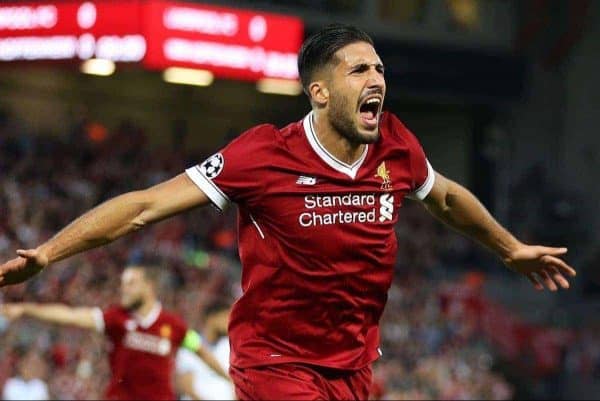 Liverpool hit three early goals to comfortably see off Hoffenheim and claim a place in the Champions League group stages.

The first opportunity of the game arrived for Liverpool when Alberto Moreno was brought down on the edge of the box inside two minutes. The resulting free-kick saw supporters pondering a repeat of Trent Alexander-Arnold‘s first-leg heroics, but this time he hit the wall.

There was an even better chance two minutes later as Sadio Mane raced clear but he couldn’t slot his shot past the keeper.

Liverpool put plenty of pressure on early on and the breakthrough arrived in the 10th minute, with Mane hack-heeling for Emre Can just inside the box and the German’s shot deflected past the keeper for 1-0.

It was 2-0 before 20 minutes were up, Mo Salah tapping in from six yards out when Gini Wijnaldum‘s shot rebounded off the post.

The third goal was the best of the bunch, a lovely move saw Mane free down the left, who played in Firmino, whose back post cross was side footed home by Can for 3-0 – the German’s first brace of his career.

Hoffenheim though created chances of their own, and got one back in the 29th minute, Uth providing a smart finish past Mignolet after being played in down Liverpool’s left side again.

Can had a chane for his hat-trick shortly before half-time after more smart play in midfield saw Mane again creating the chance on the left, but this time Can’s effort wasn’t on target.

The Dutchman had another chance after some superb work from Alexander-Arnold down the right, but his near-post show was well saved.

The fourth goal then arrived just after the hour mark. Jordan Henderson won the ball well in midfield before putting it on a plate for Roberto Firmino to secure the goal his excellent play deserved.

Hoffenheim added a consolation in the 79th minute, Wagner heading home quite easily from a cross from the Liverpool right.

Ultimately, this match summed up Liverpool – sensational at times when their attack is fluid and firing, but always suspect in defence.