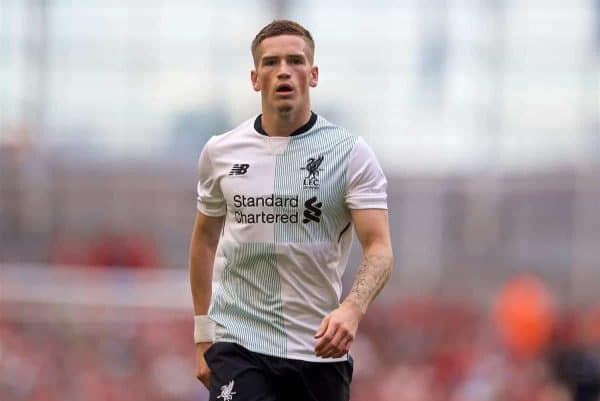 Liverpool winger Ryan Kent has put pen to paper on a new long-term contract with the club, believed to tie him to the club until 2022.

The 20-year-old appeared in seven of the Reds’ eight friendlies over the summer, as he made a surprise breakthrough into Klopp’s first-team thinking.

Now the club have confirmed that Kent has agreed a new deal, which according to the Times‘ Paul Joyce will keep him on Merseyside for the next five years.

It was previously reported that Kent would head out on loan after signing a new contract, but that now seems unlikely.

While fellow youngster Shamal George’s deal was announced at the same time as his departure for Carlisle United, Kent looks primed for an immediate first-team role.

Speaking on signing his new contract at Melwood on Thursday, Kent outlined his ambitions at Liverpool.

“Committing myself to Liverpool is a very big thing, so I’d like to become a fully fledged member of the team and become a regular starter,” he said.

“It’s the team I’ve dreamed myself playing for since I was seven years old, so that’s where I’d like to see myself in the future.”

The youngster integrated well within the group over pre-season, after rarely training with the first team since Klopp’s arrival in 2015 due to loans with Barnsley and Coventry City.

But now he believes he is able to express himself, and says he has “nothing to lose” in pushing for a place.

“I’ve probably been a lot more outgoing around the training camp, really expressing myself and not shying away from opportunities to go and show what I can do on the ball,” he explained.

“Maybe in the past I’ve been a bit tentative and given other players the ball when I should have been showing them and the manager what I can do.

“I’ve tried not to take any safe options—I’ve got nothing to lose here at Liverpool Football Club.

“I’ve committed myself to the club with a new deal, so I’ve got a lot of time to learn and progress as a footballer, so that’s in my favour.”

Klopp clearly believes Kent is a player capable of making his mark at Anfield in the future, and serving as cover for Sadio Mane and Mohamed Salah this season, he will certainly get his chance.