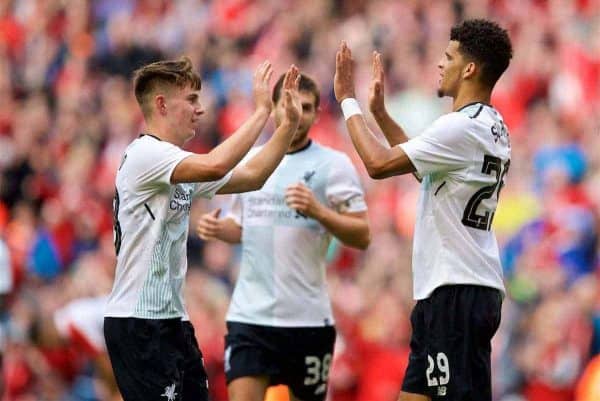 Liverpool ended their pre-season campaign with a 3-1 victory over Athletic Bilbao at the Aviva stadium in Dublin.

Liverpool went into the final pre-season game on the back of their penalty shoot-out defeat to Atletico Madrid in the final of the Audi Cup.

Philippe Coutinho and Adam Lallana picked up injuries following that defeat, while Daniel Sturridge also remained absent after coming off with a problem against Bayern Munich.

Jordan Henderson also missed the game through illness meaning James Milner was handed a rare start in midfield, as well as the captain’s armband.

That meant Alberto Moreno had another opportunity to impress in the left-back role.

The Reds started off well, with Roberto Firmino playing particularly impressively and it was the Brazilian who won and converted a penalty after 20 minutes.

Divock Origi missed several chances and Bilbao benefited from that when they drew level through Inaki Williams shortly afterwards.

Jurgen Klopp made several changes at half-time and Ben Woodburn was keen to impress when he produced a sublime finish to give Liverpool the lead again.

Dominic Solanke added Liverpool’s third as the Reds rounded off a good performance.

Fans had mixed opinions on Milner starting in midfield….

I have previously hated him in CM. But that was mainly in a 2 man CM not 3! #LFC

“Milner should stay in midfield now – that’s his natural position and he’s getting too old for bombing up and down the flanks.” – Kevin David Mac on Facebook.

Do we have a midfield crisis already? Bring back Lucas ;)#LFC

Shocking from Origi that, how on earth has he missed!?

“Can we buy a clinical striker! Origi is so wasteful it’s frustrating.” – Sgtstudge on the forums.

What will become of Big Divvy?

“Nice skill from Firmino” – Akie Foong on the forums.

Bobby is scoring 20 this season

Love that our No9 looks like he will be taking pens this season! #Firmino

But fans weren’t happy when they scored…

Lovren going to ground there like a really bad defender.

Origi and lovren not having games to write home about. Plenty which can be improved on 1-1

Origi makes me do this at least 3/4 times a game…… pic.twitter.com/PtCsMA5bIP

Lovren should focus on his defending and improving as a player rather than constantly telling us in the media how good he will become.

Moreno had another good game at left-back…

Gotta feel for Robertson. He comes, Moreno becomes best left back in the league? #LFC

If Moreno can look this good after being garbage for so long, I'm gonna learn to figure skate and plan on making the next olympics.#LFC

Is it too late for Alberto Moreno to revive his #LFC -career?

Woodburn made an impact after coming on as a substitute…

How good is Ben Woodburn though?

Our youngsters make the Pros look average at times don't they. Solanke, Kent, Woodburn and Trent.

“Woodburn. I thought that was Coutinho for a second…Wow!” – The Brazilian Scouser on the forums.

That was a special goal by Woodburn. ?? #LFC

Loads of positives there for Reds yes need a couple more players but Trent, Kent, Woodburn, Solanke, Ejaria and Gomez have all impressed

And Solanke scored the final goal of the pre-season campaign…

Call it knee-jerk etc, but Solanke is better than Origi. Just a superior all-round footballer.

If #LFC had paid £40m for a striker and he had the same pre-season as Solanke we would be buzzing our collective tits off.

“Origi has just been pushed to the 4th striking choice by Solanke today. Looks like an excellent signing.” – Pushan Bhattacharya on Facebook.

Kent, Ejaria, Solanke, Woodburn, Gomez and Alexander-Arnold… The future is bright, the future is red