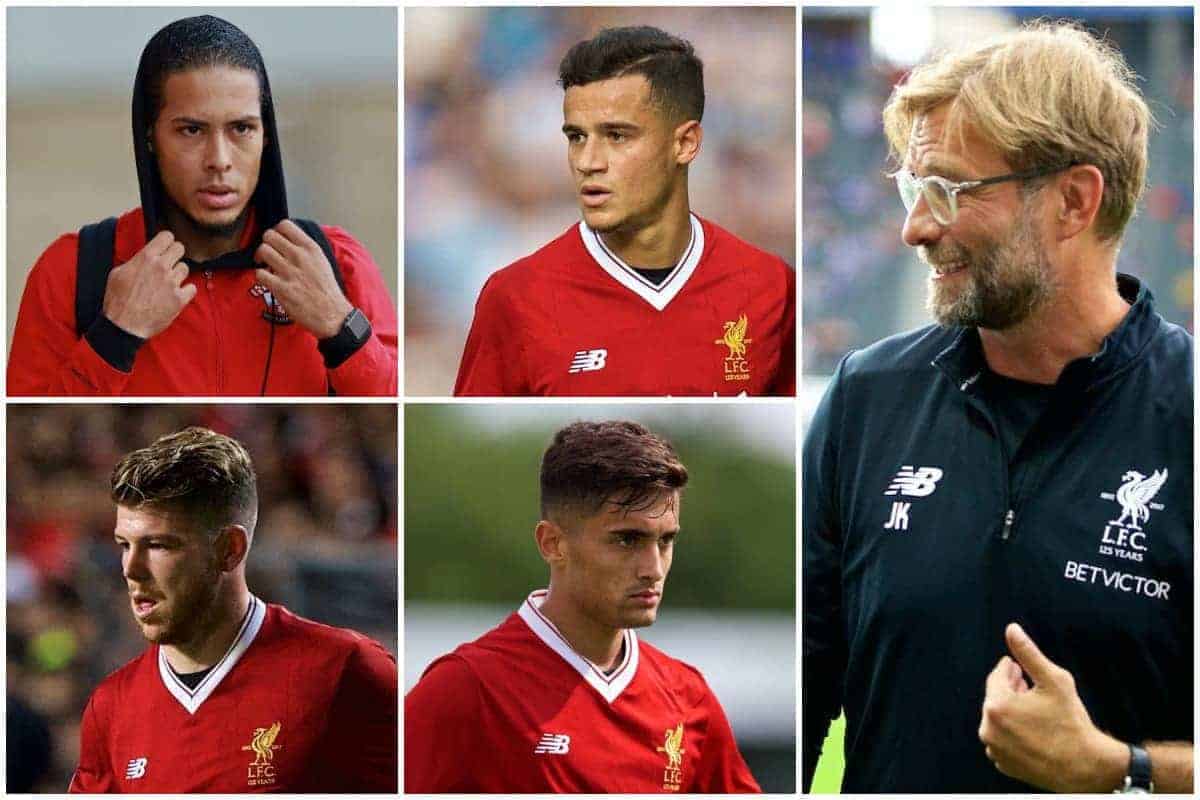 We round up the latest Liverpool transfer news and rumours on Tuesday, as the Reds return for training ahead of Saturday’s clash with Watford.

Jurgen Klopp‘s side will take to Vicarage Road this weekend to kick off their Premier League campaign, taking on a new-look Hornets, now managed by Marco Silva.

Though there are still over three weeks left until the transfer window closes, there is much to do off the field on Merseyside, both in terms of incomings and outgoings.

Here’s the latest from the rumour mill, including an update on Klopp’s priority defensive target.

The 26-year-old stated his ambitions to join a club challenging for European honours, with Chelsea, Arsenal and Man City also mooted as possible suitors along with Liverpool.

According to the Mirror, Van Dijk still prefers a move to Merseyside, though Southampton are insistent that they won’t part ways with their defensive linchpin.

But speaking as part of Sky Sports’ The Debate on Monday night, ex-Reds and Saints midfielder Jamie Redknapp said Van Dijk leaving is an “absolute certainty.”

“He could probably earn three or four times his Southampton money at Liverpool or Chelsea,” he said, “so why wouldn’t you want to go and play for a better club?”

While they look to take advantage of Van Dijk’s desire to leave Hampshire, Liverpool are battling against the departure of one of their own key players in Philippe Coutinho.

The 25-year-old is reported to be eyeing a move to Barcelona—who saw a £72 million bid for the Brazilian rejected last month—to replace his compatriot, Neymar.

The Mail even claimed that Liverpool were set to hold talks with a delegation from the Spanish side this week, with Oscar Grau, Raul Sanllehi and Javier Bordas flying into England.

And Yahoo Sport‘s Duncan Castle suggested that Coutinho had mounted a “training protest” in order to force through a move.

But the Liverpool Echo cited senior club officials in relaying that the midfielder is still committed to the Reds despite his wish to move, and they are still not willing to sell.

However, Coutinho is said to have missed training on Tuesday due to a back injury. The Echo adds that “There are no issues or concerns about Coutinho’s attitude around the club.”

Earlier in the summer, Alberto Moreno seemed one of the Liverpool players most likely to move on to pastures new, along with Mamadou Sakho and Lazar Markovic.

None of the senior trio are yet to depart, but while Sakho and Markovic can still expect to be shipped out, Moreno may have regained his place under Klopp.

This comes despite reported interest from former club Sevilla, with Diario de Sevilla claiming that while the Liga side are eager to sign Moreno on loan, Liverpool are not so willing.

They report that due to Moreno’s performances throughout pre-season, he has “changed the opinion” of his manager, who could now see him as a first-team option.

Furthermore, the Harrow Times report that speculative interest from Saturday’s opponents Watford is just that.

It could well be that Moreno starts the season against the Hornets this weekend. Having him around would also keep Coutinho happy.

While this number is likely to increase in the coming weeks, Klopp seems content with retaining the majority of his young talent to flesh out his U23s ranks.

However, according to the Mail, 18-year-old academy midfielder Yan Dhanda could be set for a temporary move.

They claim that Bristol City, Leeds United and Nottingham Forest are interested in signing Dhanda on loan.

However, this may be complicated due to his current deal expiring next summer. Finally, questionable reports in Spain suggest that Liverpool are among a host of clubs interested in signing wantaway Real Madrid winger Lucas Vazquez.

Don Balon claim that, if Vazquez is not included in Zinedine Zidane’s squad for Tuesday night’s European Super Cup final clash with Man United, he will push for a move away.

Along with the Reds, Arsenal, Newcastle United and AS Roma would reportedly all be interested in securing the 26-year-old’s services.

While it can never hurt to have strength in depth, it would seem that this summer’s £36.9 million deal to sign Mohamed Salah puts paid to any claims Klopp would want Vazquez.