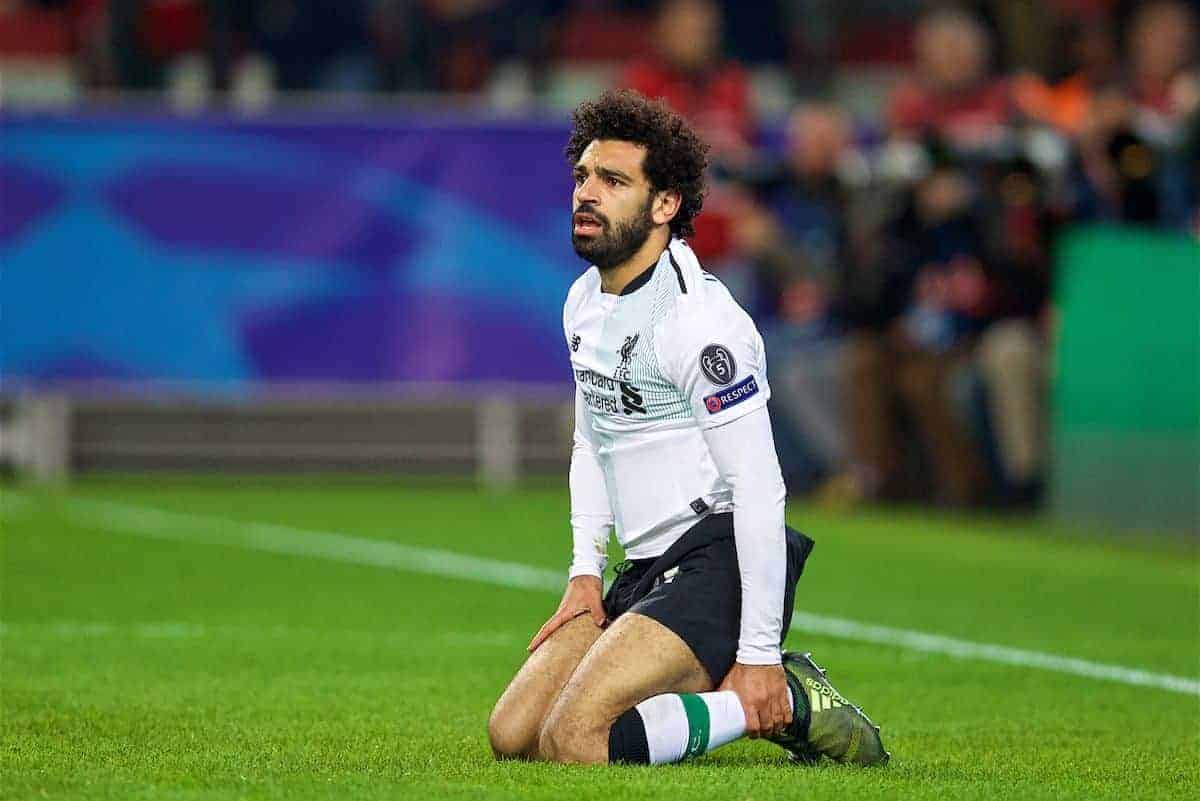 Liverpool created chance after chance but couldn’t come away with the win, drawing 1-1 with Spartak Moscow in the Champions League group stage. Questions will be asked of Karius on the Spartak goal, and whether criticism is warranted or not, he’ll get some for it.

Fernando’s free-kick went over the wall, past a number of bodies, and the ‘keeper saw the shot late, but once he sees it he should probably get to it.

While his starting position should be to protect the other side of his goal which the wall isn’t covering, once he realises the shot is going over it he should already be adjusting his feet.

Regardless of the size of the wall, he should at least make sure he has a view through to the free-kick taker when setting it up, and then respond during their run-up.

But he doesn’t have his feet in the right position to dive fully at the shot and it goes past him into the centre of the goal.

The German stopper didn’t have too much to do during the rest of the game, and although he did sweep up well behind the defence on the odd occasion, he will be disappointed to have not been able to do his job at a vital moment.

Emre Can was a constant threat in this game—to get sent off.

After picking up a booking in the sixth minute it looked inevitable that he would see a second yellow, and it may have affected his overall performance.

His passing was off throughout the game, and he ran up a blind alley to pass without looking on 22 minutes, which turned over possession prior to the free-kick from which Spartak scored.

Would get Emre Can off ASAP. Perhaps the worst he's played since joining.

He was eventually taken off by Klopp, and not before time—replaced by Georginio Wijnaldum in the 73rd minute—finishing the game with a passing accuracy of just 72 percent. Roberto Firmino worked hard as he always does, often winning the ball to create chances for himself, but when it came to the crunch and the chances needed taking, he was unable to convert them.

A close-range effort from a superb Jordan Henderson cross in the first half bounced off him, when he should have been gambling that the defender would miss the ball and tapping it in.

Another chance created by his own hard work was skied into the stands in the second half.

Daniel Sturridge came on by popular demand to solve all of Liverpool’s striking problems, but even the usually prolific marksman couldn’t find the net.

His touch was as sloppy as the Brazilian’s had been before him, and he missed one of the chances of the game when he volleyed a closerange chance—again from a Henderson cross—over the bar.

It was a disappointing night for the centre-forwards in all aspects of their game, as the buildup play of both was uncharacteristically careless throughout their time on the pitch. Substitutions aren’t just made based on performance and form. Tonight was proof of this.

Sadio Mane was one of the players who looked most likely to produce in the Liverpool attack, as he has for much of the season.

But having missed a few games due to suspension he may not have been considered completely match fit and was taken off midway the second half.

Wijnaldum was brought on when the side needed a goal, though getting goals isn’t his main job—he’s never managed to get on the scoresheet in an away game at either Newcastle or Liverpool.

The only unquestionable decision was to take Can off, and even that may have come too late.

The third permitted change wasn’t made, as the manager decided to keep Alex Oxlade-Chamberlain and James Milner fresh for the weekend. With two points from two games it’s getting to the stage where future plans are being made in terms of how many points are needed from the remaining matches.

It will now be important that the side get all six points in the upcoming double-header away and then at home to Slovenian side Maribor.

Sevilla away will be the most difficult game in the group, but on this showing Spartak at home should be three points.

Getting the expected results in the remaining games would leave the club on 11 points.

But this is Liverpool, and they could easily draw at Maribor as they have done in Moscow.

Given they way they play and dominate games in attack, the Reds should be topping this group rather than simply hoping to qualify for the next round in second place.