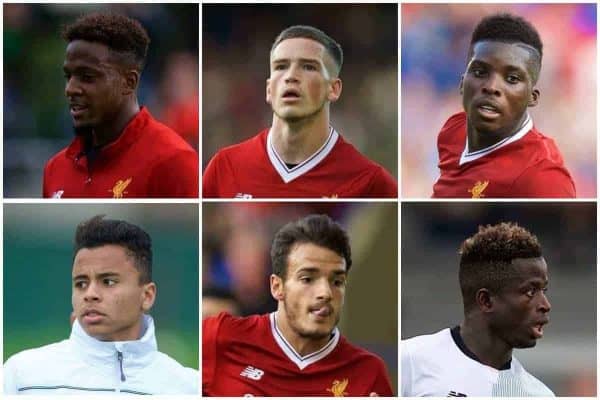 From Divock Origi to Toni Gomes: The lowdown on Liverpool’s 10 departing loanees

The summer transfer window saw 10 Liverpool players depart on loan, with some interesting moves made by those who left Anfield.

Each loanee will hope for a campaign of consistent game time elsewhere, and that their respective spells prove rewarding experiences which help secure a long-term Liverpool future.

Here’s the lowdown on who moved where, and what may lie ahead for the loaned Reds this season.

Expectations: Even though Origi has slipped down the pecking order, that Klopp allowed the Belgian to leave was still a surprise.

More surprising was that this came in a move to the Bundesliga rather than a Premier League club—which arguably would have provided clearer indication of his progression and Anfield future.

However, Origi will now enjoy regular action on a top European stage, and with Wolfsburg paying a £6 million fee and his full wages for the loan, expect the striker to instantly become the main man in Andries Jonker’s attack.

Consistent game time will hopefully bring a stream of goals and confidence for Origi, who could be recalled in January if he impresses.

Anfield future? Yes, no doubt about it. That the deal included a recall clause but no option to buy speaks volumes, and Origi will certainly return to Anfield next summer—if not January—hopefully an in-form and confident player.

Expectations: It was also surprising that Kent was allowed to depart, given his positive pre-season form, recent new long-term contract and with the Reds’ relatively light squad.

But Kent himself reportedly wanted a move to secure regular first-team action, and he will receive just that while stepping up to a top European stage.

With Frieburg paying a £1 million fee and all of Kent’s wages—also likely meeting Klopp’s demand that he is first choice—the 20-year-old is primed to become a key part of Christian Streich’s team playing out wide.

An interesting challenge lies ahead for Kent—one he will relish having made great progress in the last year—and Klopp will eagerly monitor his progress.

Anfield future? Yes. Kent will hope his latest switch proves as productive as his last and convinces Klopp once and for all he can contribute going forward.

Expectations: It was clearly felt Ojo needed a loan to kickstart his development and he agreed a switch to the Championship promotion hopefuls.

The move will provide a first full season as a regular starter at senior level and the 20-year-old has made a positive start, already playing twice for Slavisa Jokanovic’s team.

Ojo has also shown promising signs with bright displays in those opening games on the right of Fulham’s attack, and this is the position he will most likely play at Craven Cottage.

Anfield future? 50/50 chance. Ojo will hope to mirror the sort of loan Kent enjoyed in the Championship last season—and a spell like that would give him a fighting chance of an Anfield future on return.

Expectations: Chirivella seems nicely poised to enjoy another solid spell of Eredivisie football with Willem II, having proved his capabilities in the Dutch top flight with Go Ahead Eagles last season.

The Spaniard has started positively, instantly commanding a starting role and playing in all three games since arriving, and he will be a consistent part of Erwin van de Looi’s midfield.

Chirivella must step his game up another level to really begin proving his capability as a first-team midfielder for a higher level though, and that’s his challenge for the season.

Anfield future? No. It is vital Chirivella produces strong, consistent form to put himself in the shop window with a first-team future at Anfield unlikely when he returns.

Expectations: After experiencing one of Europe’s strongest leagues in the Bundesliga last season, the move to the Cypriot First Division seems a disappointing step down for Allan.

However the chance to play Europa League football—and help eliminate Everton in the group stage—is a big plus to allow him to still experience big occasions.

The vital factor is, of course, that the 20-year-old plays enough first-team football to aid his quest for a work permit, and his talent is likely to see him handed that in Cyprus.

Anfield future? Allan’s future all hinges on a successful work-permit application, and hopefully a rewarding loan will help secure the future Klopp believes he can have.

Expectations: Awoniyi is on his third season-long spell in Europe and has hit the ground running—scoring once and claiming two assists in his first three games.

It’s a hugely positive step after two extremely slow starts to his previous loans, and the Nigerian has to capitalise on the bright opening by carving a permanent starting role for the first time at senior level.

It’s crucial Awoniyi then uses that to produce a solid goalscoring campaign, with it now time for the 20-year-old to begin proving his progression in European football.

Anfield future? No. Given how things have gone so far you sense we will never see Awoniyi in a red shirt, and a promising spell in Belgium is unlikely to change that.

Expectations: Randall desperately needed a loan for regular first-team football, and he moved to the Scottish Premiership side in search of it.

It represents a good move for the academy product, who has made a solid start at Tynecastle having featured in all of Hearts’ league games since arriving.

Randall seems set to feature heavily this season, but expect this to come in midfield rather than his usual right-back role, with the 21-year-old having revealed the central position is where he will play.

Anfield future? No. Randall will hope a spell in Edinburgh proves as rewarding as it did for Danny Ward, but even if it does, it won’t bear fruit with an Anfield role upon return.

Expectations: Joining League One outfit Rochdale until January provides a much needed route back into first-team football for the once-emerging prospect.

Williams will want get his career back on track after some terrible luck with injuries and tough loan spells in the last two years.

The natural central midfielder—who can also play centre-back—is likely to enjoy a good amount of game-time at Spotland, as Rochdale’s tight-knit squad seek to consolidate their place in the third tier.

Anfield future? No. The loan will be a good chance for Williams to prove his capabilities for first-team football however, with the 21-year-old now needing to begin finding a new permanent home.

Expectations: The move to League Two is all about gaining first-team experience for the highly rated goalkeeper, who signed a new long-term contract before leaving.

George has arrived at Brunton Park as second choice, and it’s difficult to see the teenager enjoying too much game time for Keith Curle’s side.

However, George made his professional debut in the Football League Trophy in midweek—marking the occasion with a clean sheet—and he will hope this convinces Curle to hand him more game time as the season unfolds.

Anfield future? Yes. George’s loan is focused on experience and he will hopefully return to Liverpool an improved and more mature goalkeeper than when he left.

Expectations: Gomes’ move to the Football League debutants represents an exciting first-ever spell away from Anfield for the academy striker.

Liverpool say the 18-year-old “will aim to build up first-team experience” at the New Lawn in League Two, after two seasons honing his skills with consistent academy action.

How prominently Gomes—who can play as a striker or No. 10—features remains to be seen, but it promises to be an educational experience in which he will hopefully show his potential on the first-team stage.

Anfield future? Yes. A real learning curve awaits for Gomes, and one that will hopefully shape him into a more mature and a first-team ready player.