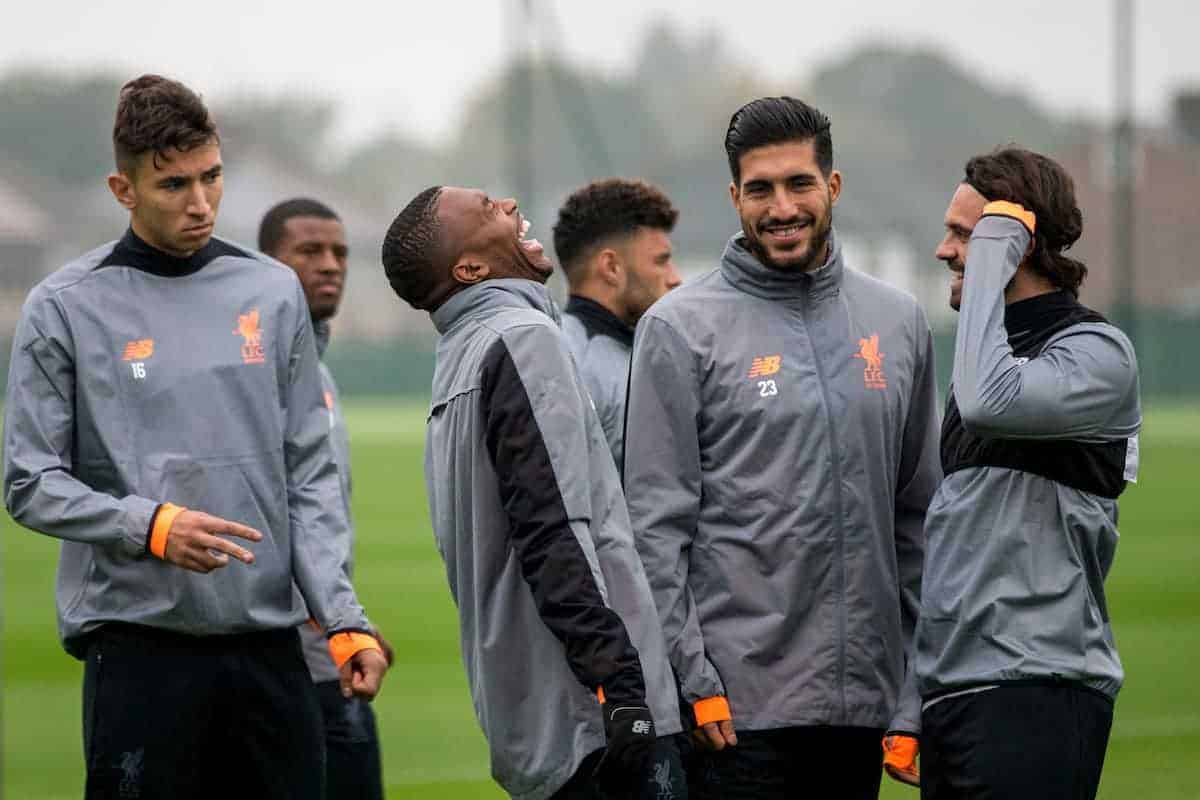 Jurgen Klopp oversaw training with a 24-man squad at Melwood on Monday, ahead of Liverpool’s Champions League clash with Spartak Moscow.

The Reds are making the trip to Russia for their second Group E clash of the campaign, looking to build on Saturday’s 3-2 victory away to Leicester City.

It was another miserable, rainy morning in West Derby, with Klopp’s squad acclimatised as autumn sets in on Merseyside.

Joe Gomez was the only new absentee, with the defender suspended following his red card in the 1-1 draw with Sevilla, while Nathaniel Clyne and Adam Lallana are still injured.

With the Liverpool U19s set to turn out in the UEFA Youth League earlier on Tuesday, Ben Woodburn was also not part of Klopp’s squad.

Sadio Mane was present, however, with the winger available for the Champions League and, having served his three-match ban following his sending off at Man City, on the domestic stage, too.

Loris Karius is expected to take over from Simon Mignolet between the sticks, with the young German serving as Klopp’s No. 1 in Europe. After returning to the fold for the weekend’s win at the King Power Stadium, Joel Matip looks fit to continue in defence at the Otkrytiye Arena. The 26-year-old is likely to be joined by Dejan Lovren, with Ragnar Klavan the Reds’ only reserve option at centre-back due to Gomez’s suspension. Klopp oversaw training drills alongside assistant manager Zeljko Buvac and head of fitness and conditioning Andreas Kornmayer, ahead of the 2,109-mile flight to Moscow. Philippe Coutinho was in good spirits at Melwood, after netting his first goal of the season with a sensational free-kick against the Foxes. Klopp is leading Liverpool through their first Champions League campaign of his tenure, and their first since 2014, and he will be eager for a vital victory against Spartak. In training but not in squad to Moscow: Markovic, Ings, Grujic