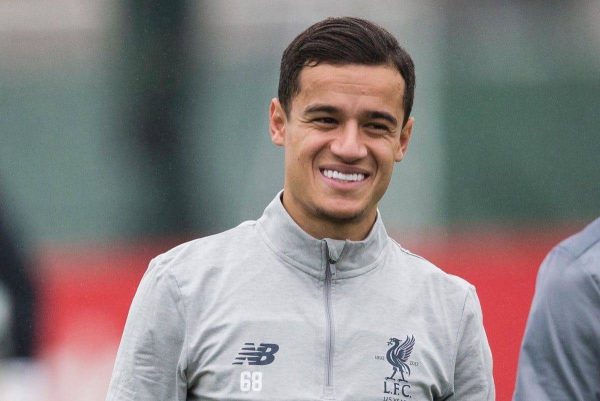 Dejan Lovren and Philippe Coutinho could be fit for Liverpool vs. Maribor

Jurgen Klopp has revealed that Dejan Lovren and Philippe Coutinho will face late fitness tests ahead of Liverpool’s clash with Maribor on Wednesday.

The duo missed Saturday’s 3-0 win at home to Huddersfield Town in the Premier League, with Lovren pulling out during the warmup with a thigh injury.

Coutinho is struggling with a groin problem, and is considered a doubt for both midweek in the Champions League and Saturday evening’s trip to take on West Ham.

But speaking at Anfield on Tuesday afternoon, Klopp said that it was “not 100 percent sure” whether they will miss out.

“They are both much better, but if it will be OK for tomorrow night I don’t know in this moment,” he told reporters.

“Our [training] session is at 5pm [and] we will see who will be involved then.

“I hope both are involved in the session, that would give us an opportunity at least.

“If they don’t train it would not, especially in Dejan’s case, mean he immediately wouldn’t play; if he could train tomorrow morning it would be enough.”

Klopp also explained how both Joe Gomez and Alberto Moreno were struggling with minor issues after the weekend’s win.

“We had a few little things after the game,” he continued.

“Alberto had a kind of cramp, Joe felt it a little bit, so we were really careful in the last two days.

“Tonight and especially tomorrow morning will be the first time I really think about the lineup, so I know who is available.”

Three players who will definitely miss out, however, are Nathaniel Clyne (back), Adam Lallana (thigh) and Sadio Mane (hamstring), while Danny Ward has been struggling with a back injury.

UPDATE: It seems Klopp’s words were wrong yet again on injuries – neither Coutinho or Lovren trained with the first-team on Tuesday evening, but Gomez and Moreno did.