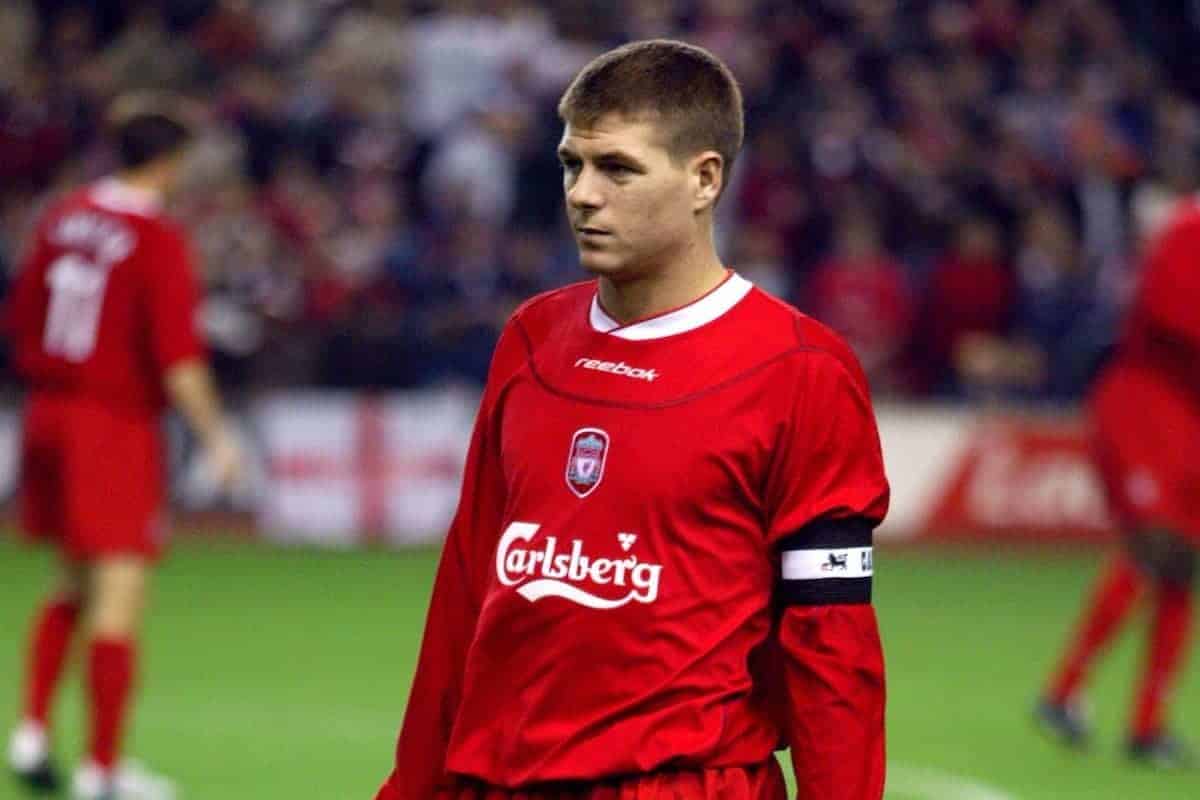 Liverpool’s Champions League clash with Maribor is their first against a Slovenian side since Steven Gerrard’s landmark night at Anfield in 2003.

This season, the German will be hoping to be the first manager to lead Liverpool out of the group stage in the Champions League since Rafa Benitez in 2008/09, restoring European pedigree to Merseyside.

Before Benitez, Gerard Houllier presided over a successful run on the continent, with his last season with the Reds finding them in the UEFA Cup, leading them to the last 16 in 2003/04.

That campaign saw Liverpool make their last outing against a Slovenian opponent in 13 years, when Olimpija Ljubljana took to Anfield for their first-round, second-leg clash on October 15, 2003.

And this heralded milestones for two Reds in particular, though for wildly contrasting reasons. Liverpool were held to a 1-1 draw at the Bezigrad Stadium three weeks previous, with Michael Owen’s 77th-minute strike cancelling out Anton Zlogar’s opener, piling on the pressure at home.

Houllier made three changes to his side from that night in Ljubljana, with Steve Finnan coming in to replace Salif Diao, Gerrard taking over from Danny Murphy and El Hadji Diouf deputising for Owen.

Gerrard had already led his side out on a number of occasions, but for the 23-year-old this was a momentous occasion, having been named Liverpool’s official captain earlier in the day.

“Stevie will lead the team against Ljubljana and in the future,” Houllier told reporters before the game, with the midfielder taking over from Sami Hyypia, to relieve pressure on the defender.

Hyypia went to make 464 appearances for the Reds, leading by example at the back, even without the armband.

The Reds responded to their previous draw with a dominant display against the Slovenian outfit, with Anthony Le Tallec opening the scoring with his first-ever goal for the club.

Le Tallec, making his sixth appearance for Liverpool and his second start, had already impressed before slotting home when Borut Mavric spilled Diouf’s cross, with his creativity proving key.

Emile Heskey added a second for the home side before half-time, notching his 50th goal for the Reds following a Vladimir Smicer delivery, before he and Le Tallec combined to assist Harry Kewell after the break.

Diouf could have made it 4-0 late on when Finnan was brought down in the penalty area by Marko Kmetec, but Mavric dived the right way to deny the Senegalese from the spot.

Three goals were enough to seal Houllier’s side their place in the second round, however, and the victory provided a much-needed boost for a number of players—including Florent Sinama Pongolle, who made his debut from the substitutes’ bench. Failure to beyond the last 16 in the UEFA Cup that season contributed heavily to Houllier’s departure, by mutual consent, in the summer—replaced by Benitez, who had led Valencia to the trophy.

But Gerrard’s presence as captain for the following 11 years serves to highlight the Frenchman’s legacy.

A champion of youth, Houllier entrusted the midfielder, who later admitted he felt he was “still a bit young” to take on the duty, though describing it as “one of the best days of my life.”

For Le Tallec, however, that 3-0 victory at Anfield serves as a bittersweet memory: Houllier’s protege suffered when his countryman left the club, making just nine appearances under Benitez.

The forward spent loan spells with Saint-Etienne, Sunderland, Sochaux and Le Mans before joining the latter on a permanent deal in 2008, remaining in France until 2015, before moving to Greece and, now, Romania.

His 29th-minute strike against Olimpija was his only goal for Liverpool in 32 appearances, a disappointing return for a player with such potential. When Liverpool take on Maribor on Tuesday night, this tale of dovetailing fortunes could be invaluable for Klopp’s burgeoning squad.

Gerrard took his captaincy and cemented himself as one of the club’s greatest-ever players, with European success two years later under Benitez underlining his credentials; something Philippe Coutinho, for example, is regularly touted as requiring before being considered world class.

And the trip could provide opportunities for a host of fringe figures looking to establish themselves under Klopp, such as Marko Grujic and Alex Oxlade-Chamberlain.

Le Tallec’s impressive night in Ljubljana and subsequent fade into the periphery serves to highlight the need for consistency, and Klopp’s squad is more competitive than Houllier’s.

On a run of one win in their last eight games, the Reds’ midweek clash in Slovenia should provide a platform to build a more positive stretch of form.

Almost fourteen years to the day from their last outing against a side from the Eastern European nation, Liverpool can hope for a similarly productive night.