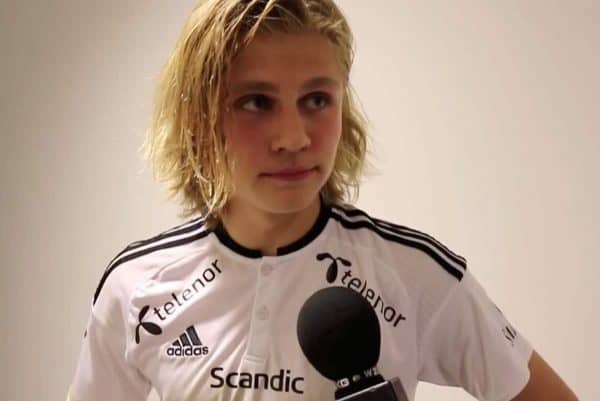 Liverpool are said to be interested in signing Rosenborg’s Norwegian midfielder Olaus Jair Skarsem, with the 19-year-old open to a move.

Rosenborg are currently top of the Eliteserien, nine points clear of second-placed Sarpsborg 08 and 10 above Ole Gunnar Solskjaer’s Molde.

The Norwegian giants are chasing their third consecutive title this season, with six games left to play, and their rise to prominence has come since Stig Inge Bjornebye’s arrival in 2015.

The ex-Liverpool defender is sporting director for the Trondheim club, overseeing transfers and contract negotiations, most notably signing Nicklas Bendtner in March.

Bjornebye could come into contact with his former club in the near future, with ESPN reporting that the Reds are among the clubs scouting Rosenborg U19s midfielder Skarsem.

Skarsem currently also turns out for Rosenborg II in the 3. Division, and is “regarded as one of the brightest prospects to emerge from Norway in recent years.”

Liverpool are said to be set to join Everton, West Ham, Leicester City, Brighton and Sevilla in sending scouts to watch Skarsem in the U19s’ cup clash with Viking on Wednesday.

A creative, box-to-box midfielder, Skarsem would likely join the Reds’ academy ranks, following the arrival of countryman Edvard Tagseth from FK Neset in the summer.

Addressing speculation over a move to Liverpool in an interview with Adresseavisen last month, Skarsem suggested he would be open to joining Jurgen Klopp‘s side.

However, he stressed that there was “very little concrete” regarding a switch at this stage, with the Reds clearly yet to make an approach.

“It was rather strange and obviously not something I had expected,” he conceded.

“But it’s motivational as well and shows that I’m doing something right, whether there is anything to it or not.

“I don’t really have much to say about the [reports], I know as much as anyone else who has read the articles.

“It’s nice to be linked with big clubs, but there is very little concrete so it’s not something I can consider.

“Of course it’s a big club with a great history. Naturally it would be interesting.

“But it’s not something I can think about now. I haven’t heard anything, I’ve just read the articles myself. I can’t think about it, I have to focus on Rosenborg.”

Skarsem is taking a sensible approach, as Liverpool are likely scouting a host of talents around the continent, with representatives also said to be watching Bayer Leverkusen’s Kai Havertz.

But given the Reds’ links to Bjornebye, it is not inconceivable that they could beat their Premier League rivals to his signature.