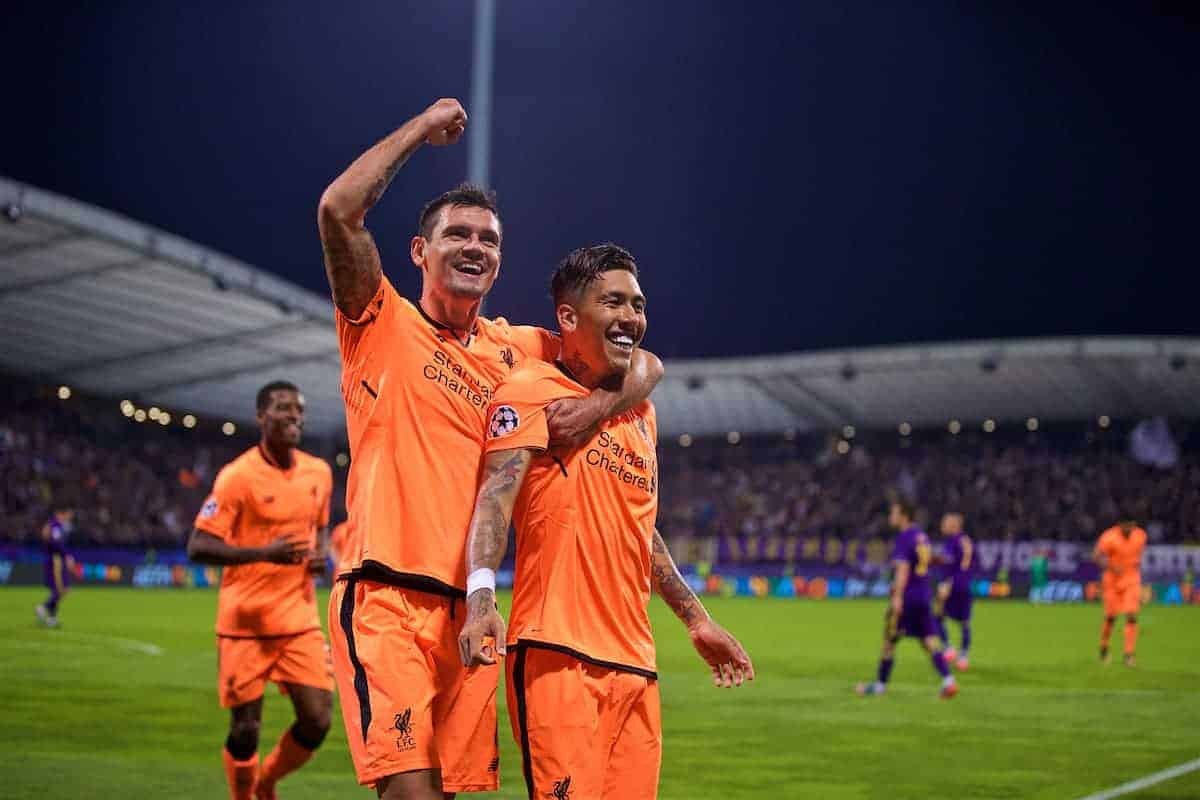 Liverpool produced a stellar, dominant showing as they sealed a 7-0 win over Maribor in the Champions League group stage on Tuesday night.

Taking to the Stadion Ljudski vrt on Tuesday night, Jurgen Klopp‘s Reds sought only their second victory since the start of September, taking on Europe’s 77th-ranked side.

Maribor vowed to attack their visitors before the clash, setting up an interesting dynamic, particularly following Saturday’s drab 0-0 draw at home to Man United.

Klopp made three changes to his lineup from that afternoon at Anfield, with Loris Karius, Trent Alexander-Arnold and James Milner replacing Simon Mignolet, Joe Gomez and Jordan Henderson.

Still boasting a formidable squad, in a tiny stadium, Liverpool will have been confident of sealing the victory, and it proved to be a cakewalk in Slovenia. With Maribor wide open, the Reds enjoyed the perfect start, with Mohamed Salah winning a loose ball on the right flank, charging into the box and teeing up Roberto Firmino for the opener.

It took just nine minutes for Liverpool to add their second, with Milner overlapping Salah and sending a deep cross in for Philippe Coutinho to hammer home on the volley.

And Salah added to his assist with his seventh goal since joining, slotting past Jasmin Handanovic with his left after being found by Firmino.

Karius was drawn into action before the half-hour mark, though, diving low to his right to deny an effort from Maribor left-back Mitja Viler.

But Liverpool were back on top shortly after, and with Alberto Moreno rampaging down the left, Salah and Firmino were on hand to convert his low cross, with the Egyptian claiming the goal.

Maribor centre-back Marko Suler had a golden opportunity to grab one back just before the break, but sent his free header well wide of the past, with referee Viktor Kassai blowing for half-time at 4-0.

Liverpool continued their dominance after the break, with Georginio Wijnaldum coming close as Firmino squared into the area, before Coutinho stung Handanovic’s palms with a free-kick.

The No. 10 was able to create the Reds’ fifth with another set-piece minutes later, however, with Firmino flicking the ball in with a deft header for his second of the night.

With his side holding an insurmountable lead, Klopp opted to introduce Alex Oxlade-Chamberlain in place of Salah, depriving the winger of his hat-trick but providing his fellow new arrival with valuable minutes.

Daniel Sturridge entered the fray with 22 minutes to play, with his manager no doubt keeping one eye on Sunday’s clash with Tottenham in withdrawing Firmino.

Oxlade-Chamberlain had a chance to make it 6-0 following a mistake from Handanovic, but the 24-year-old’s effort was low and straight at the goalkeeper.

Liverpool’s new No. 21 had his first goal for the club before full-time, though, while Alexander-Arnold netted on the cusp of stoppage time to seal the Reds’ biggest-ever away win in Europe.