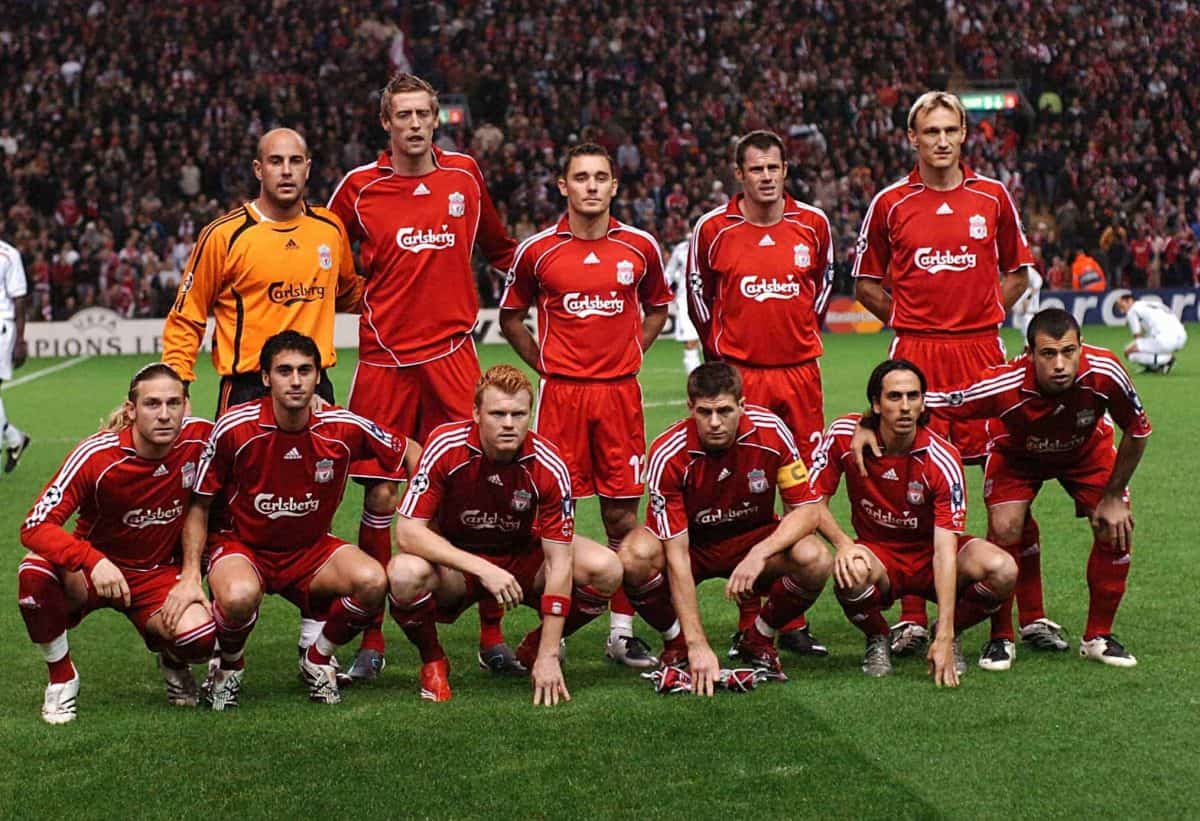 Liverpool’s resounding 7-0 win against Maribor in midweek sent fans down memory lane to when Rafael Benitez’s side racked up a record win over Besiktas.

The Reds’ mauling in Slovenia on Tuesday represented a club record scoreline on the road in Europe, but in 2007 it was a record for the entire competition that Liverpool were setting: the biggest winning margin since the Champions League began.

That 8-0 win over Besiktas has since been equalled by Real Madrid, but it means the Reds now jointly hold the Champions League records for biggest home and away wins.

It’s almost exactly 10 years since Benitez’s side ran riot at Anfield against the Turkish side, so what became of the players involved that day?

Spanish stopper Reina served the Reds up until Brendan Rodgers’ decision to replace him with Simon Mignolet.

Reina played almost 400 games before departing and has since spent time at Bayern Munich before moving to Napoli, where he has been first-choice goalkeeper for the past almost two-and-a-half years.

Arbeloa had only joined Liverpool earlier that year but quickly became a fixture in the side at full-back under Benitez, on either side of the pitch.

He left Liverpool in 2009 after playing 98 times in a Red shirt, joining Real Madrid where he enjoyed much success both as a starter and squad player.

Arbeloa spent one year at West Ham before retiring from the game in the summer just past. One of Liverpool’s biggest modern-day legends, Carragher was a one-club man who played 737 times for the Reds.

He retired from playing in 2013 and is now a co-commentator and pundit with Sky Sports.

The rock-solid pairing of Carragher and Hyypia might be one some fans wish were back on the field at times in the current season.

A Finnish defender of intelligence, composure and an iron will to win, Hyypia served as club captain before gradually taking a backseat role as his age advanced.

He left Liverpool for Bayer Leverkusen in 2009, retired two years later and has since been trying to make his way in management, most recently with FC Zurich. Hyypia is not currently attached to a club.

Brazilian full-back Aurelio joined the Reds on a free and left on a free—while also leaving, and joining, on free transfers in the middle of his six-year stay.

Immensely talented but constantly hampered by injuries, Aurelio played well over 100 games for the Reds but never quite managed to remain in the team for long stretches.

He left in 2012 for Gremio, retiring two years later.

Aurelio doesn’t appear to be involved in football at present in any capacity—but clearly still keeps an eye on the Reds, judging by his chat with LiverpoolFC.com earlier this year.

The Aurelio-Riise tandem was a frequent sight down the left side of the pitch for Liverpool, with both players capable of playing at full-back or further forward in midfield.

Riise was comfortably the more frequently playing of the duo, playing almost 350 games, before leaving for AS Roma in 2008. A meandering end to his career saw him take in Fulham, APOEL, Delhi Dynamos and Aalesund.

The Norwegian retired only last year after a short spell in India and is a regular social media commenter on the comings and goings at Anfield. While several members of the 2007 side are winding down their careers or already retired, Mascherano remains at the elite level.

The Argentinian anchorman moved to Barcelona in 2010 and there he remains, transitioned to a centre-back and having spent half a decade as a first choice alongside Gerard Pique, winning multiple titles.

He’s now perhaps third in line, with Samuel Umtiti a regular starter, but he remains a key performer for club and country.

Reds legend Gerrard played over 700 times before leaving under the management of Brendan Rodgers, trying his hand abroad with a two-year stint at MLS club LA Galaxy.

Upon retiring in 2016 he soon returned to Liverpool, this time in a coaching capacity at the club’s Academy.

At the start of 2017/18, Gerrard took the reigns as head coach of the U18 side, while also leading the U19s in the UEFA Youth League.

Israeli playmaker Benayoun gained a cult following at Anfield thanks to his habit of scoring vital goals; indeed he notched a hat-trick in this very game against Besiktas.

He left for Chelsea in 2010, sparking a tour of London which included moves to Arsenal, West Ham and QPR, before returning to his home nation.

Not exactly a loved figure at Anfield, but Ukrainian forward Voronin put in one of one of his best displays in a Reds shirt in this fixture.

He ended up scoring six times in 40 appearances for Liverpool, before leaving on loan to Hertha Berlin and then permanently to Dynamo Moscow in 2010. Voronin retired in 2014 and later begun his coaching career.

Most recently, Voronin was appointed to a role on the Ukrainian national team, where he is responsible for selecting players for call-ups. The head coach of the side is Andriy Shevchenko. A somewhat more prolific scorer for the Reds, Crouch netted 42 times in 134 games, though it took over 1,200 minutes on the pitch for his first to arrive.

The England striker left for Portsmouth in 2008, later moving to Spurs and then Stoke—where he remains now, a squad player at age 36.

He has two Premier League goals this season.

Ryan Babel came off the bench to net twice in the 8-0 win; he’s now a starting forward for…Besiktas, of all teams. He has five goals this season, including two in the Champions League.

Harry Kewell left Liverpool in 2008 after an injury-hit stay; after retiring in 2014 he became a head coach. He’s currently with Crawley Town after previously being with Watford U23s.

Lucas Leiva only left the Reds in the summer after a decade and almost 350 games. He now plays for Lazio in Serie A.

David Martin was the Reds’ back-up goalkeeper; after leaving in 2010 he spent seven years with MK Dons and moved to Millwall in the summer.

Steve Finnan retired in 2010 after short spells with Espanyol and Portsmouth. He was most recently discovered working as a property developer in London in 2015.

Fernando Torres remains active and involved in the Champions League. After leaving Liverpool for Chelsea, he spent a short stint at AC Milan before rejoining first club Atletico Madrid, where he still plays.

Dirk Kuyt left the Reds for Fenerbahce before also returning to a former club, Feyenoord, in 2015. He spent two years there before retiring in the summer in the best way possible: a hat-trick, on the final day, to seal the Eredivisie title.