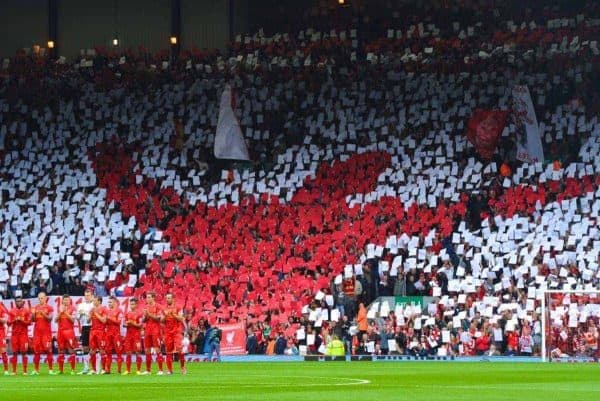 Steven Scragg spoke to Liverpool’s mosaic creator, and highly convenient best mate, Andrew Knott, about how the mosaics came about, and the process of putting them together.

I’ve been lucky enough to take part in the construction of many of the brilliant Anfield mosaics over the last two decades, through my friendship with Andrew Knott, the man whose brainchild they were, and our long association with the Liverpool fanzine Red All Over The Land.

From tentative beginnings, the mosaics eventually became second nature, and over the years they grew to become ever more intricate, to the point that they escaped the confines of the Kop to, upon occasion, stretch along the Centenary Stand, and into the Anfield Road end too.

They have proved to be a joy, and source of pride to take part in. This week, I spoke to Andrew, busy in preparation ahead of this Saturday’s mosaic.

How long have you been watching Liverpool?

I’ve been watching Liverpool all my life, but my first proper season was in 1976/77, although I’d been to watch the reserves before that.

My mum used to take me in the Anfield Road end, before I graduated onto the Kop.

How did you end up as Liverpool’s mosaic designer?

With having my own printing business, I used to print the leaflets to promote the flag days we used to have.

They’d end up floating down toward the pitch in paper airplane form when the football on the pitch wasn’t all that inspiring.

That led to me meeting John Pearman, the editor of Red All Over The Land, which I took over the printing of from Issue 6.

After the Kop became seated, [then-Liverpool CEO] Rick Parry called a meeting of supporter groups to come up with suggestions over how to create a better atmosphere at home games.

One idea was to do mosaics, like the those in Europe and South America. I offered to take a look into it, and to see if we could do one.

We had to overcome the technicalities of attaching 12,500 sheets of paper to the Kop seats, and praying that the supporters would lift them up.

When was the first Anfield mosaic, and what was it?

The first one was back in 1996, against Manchester United. To keep it simple, I just traced ‘LFC’ onto a printed A4 grid of the Kop seats.

We stuck the sheets on with stickers, which was both time-consuming and demoralising,—as you would reach the end of one row only to turn around to see half of them had already fallen off.

We ended up getting locked in the ground, but we finally sorted out the problems, and it worked perfectly the next day. We haven’t looked back since.

How difficult are they to design, do you get many volunteers, and how long do they take to lay out?

Initially, they took an age to design, but they are second nature now, as I’m used to where the exits and all the blocks are, with regards to the widths you must work with.

I know how much space I have to play with, and that makes all the difference.

We have become much quicker at them, but it still depends upon how big the mosaic is, and how many helpers you’ve got.

The volunteers that come are usually found via the club website, and I rope my friends in where possible. The most we’ve had is 39, the fewest was six.

The quickest mosaic was done in two hours, while the most painful took eight hours.

You eventually ventured away from mosaics which just centred on the Kop. Which would you say has been your most ambitious mosaic?

The mosaics really came to the fore with the ‘GH’ one, when Gerard Houllier was in hospital.

The pictures of that one went worldwide, which showed how strong the connection was between the fans and the club.

The Allez, Allez mosaic, when he returned against Roma, was a special one, while the Shankly Day mosaic was a challenge.

It was really intricate, with the Saltire, and Shankly’s face twice, plus ‘SHANKS’ and all of it on the Kop.

We’ve done quite a few now which have gone along the Centenary and the Anfield Road end, like the Hillsborough justice one after the positive judgement came through, and there was the Steven Gerrard one too.

The Ray Kennedy one was a standout one also, as it involved the away end, with Arsenal fans holding up his old No. 10, while we had his Liverpool No. 5.

Have you done any mosaics at other stadiums?

Due to the success of the Anfield mosaics, I was asked to do one for the Liverpool end at the Millennium Stadium for the 2001 FA Cup final, while I was asked by Kick It Out to help design mosaics at Reading, Chelsea, Manchester City and Newcastle United, amongst others.

I did the Johnny King mosaic at Tranmere Rovers, and it has also led to some outlandish offers, which I logistically couldn’t do, such as a Usain Bolt one in Switzerland, one for the IPL cricket, and even one at Fenway Park.

I did go over to Dublin however, to do one at Lansdowne Road, for Leinster’s last game there before the bulldozers moved in.

Amusingly, I was approached by Everton to do one over the other side of the park, but they couldn’t guarantee a full stand for the game in question, so I had to say no.

Will we be seeing any more mosaics this season, beyond this one on Saturday?

I’m sure this one won’t be the last one of the season. Maybe one for a European night, should we progress, and there will be the Hillsborough anniversary too.

Away from the mosaics, how do you think Liverpool are going to do for the rest of the season?

My hopes are still high for the season, despite our defensive problems and us not taking as many goalscoring chances as we should. We’ll click soon, and someone will get a good pasting.

Hopefully it will be Man United. I’ll be happy with a top-four finish and a run to the latter stages of the Champions League. A decent FA Cup run would be nice too.

Saturday’s mosaic is being put together on Friday, from 11am.

If you find yourself at a loose-end, you are within striking distance of Anfield, and fancy giving a hand, then feel free to contact Andrew, before 1pm on Thursday, by email at [email protected].