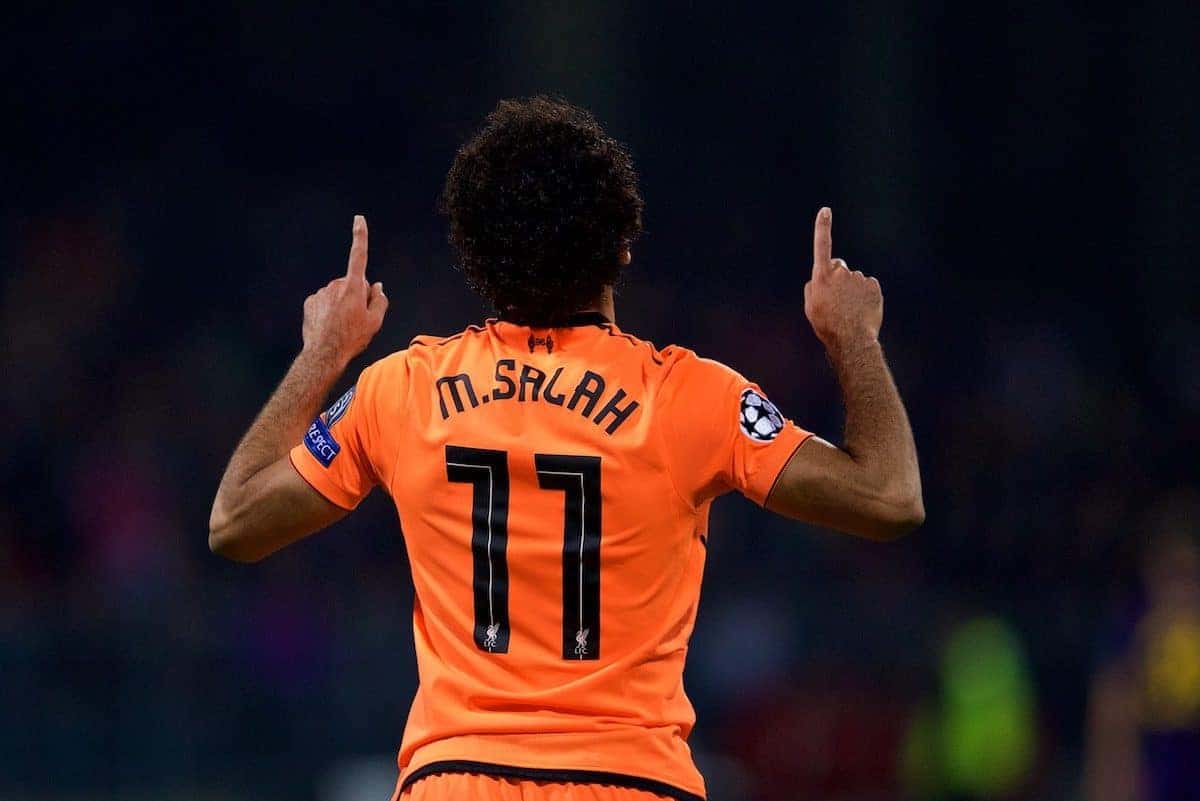 Jurgen Klopp rotated his goalkeepers again for the Champions League as Loris Karius came in for the Belgian, Simon Mignolet.

However, it was not the shot-stoppers or much maligned defence that grabbed the headlines, it was the return of a fully firing forward line.

On a night which saw Liverpool break the Champions League record for the highest away win, here are the five biggest talking points from the fixture in Slovenia.

Following on from the weekend’s fixture against Man United, Salah’s impact was telling.

Where frustration crept in on Saturday with good chances ending in a goalless draw, it took only four minutes for his influence to take a hold.

Pressing the Maribor defence, the Egyptian latched onto a lose touch and sprinted clear, crossing the ball for Roberto Firmino to tap into the net.

Any thoughts of another nervous night where telling possession resulted in little were quickly blown away.

Working exceptionally hard as part of Klopp’s front three it was only 15 minutes later Salah found himself free on the right-hand edge of the area, driving to goal he calmly slipped the ball past Jasmin Handanovic.

Salah’s evening wasn’t over with the end of the first half, a second goal came on 40 minutes, converting Moreno’s cross from two yards out.

The demolition of Arsenal at Anfield in August was starting to feel like a lifetime ago.

A drubbing at Man City soon followed to turn elation into woe, and with it the following games saw a downturn in goals and points.

Premier League draws against Burnley, Newcastle and United came either side of disappointing draws in the Champions League against Sevilla and Spartak Moscow.

With Liverpool controlling all of the aforementioned fixtures a real concern was starting to slide in: “Can Liverpool score when it matters?”

Well, on Tuesday night, it mattered: two Group E points from a possible six made the back-to-back fixtures against Maribor must-win games.

This utter devastation of Maribor, in their own stadium, allowed Liverpool to finish Matchday 3 on top of the group.

Another high-scoring game is expected at Anfield in two weeks, but importantly this will allow the squad to be confident traveling to Wembley this weekend to take on Tottenham.

A Clean Sheet Away from Anfield This was Liverpool’s first clean sheet away from home this season.

Having leaked goals from mistakes such as the one away at Spartak, as well as being pumped for five by City at the Etihad, it is key to have returned from this game with that all-important ‘nil’ next to Liverpool in the fixture listings.

The entire back four will have felt that the end product at the top of the pitch was backed up by the performance at the other end.

There was one small chance for their Slovenian hosts to grab a goal but it wasn’t taken, and Karius was positioned well should the header have been steered on target.

For Karius himself, this result will go some way to calming his nerves. Making way for Mignolet in the Premier League it has been the Champions League where the young German has been given the chance to shine.

It could be argued that he had little to do, but when asked to smother a tame shot he was on point to do so.

He was also confident enough to receive the ball outside of his box and play a clever slide pass straight into the midfield.

For the entire back line this ‘0’ that precedes the ‘7’ is most crucial.

Milner Returns to Put in a Captain’s Performance

The 31-year-old made his Champions League return in Slovenia—having not featured since the playoff round against Hoffenheim, the midfielder put in a man-of-the-match performance.

Undeterred and in typical Milner style he made a telling contribution only minutes later, cutting the ball back for Philippe Coutinho to fire into the net.

Retuning as the captain, taking over from Henderson who was rested, Liverpool looked a more attacking prospect with Milner in the side.

However, his defensive elements weren’t forgotten and he worked in tandem with both Emre Can and Georginio Wijnaldum to break down all but one of the Maribor attacks.

For a player who has so far featured infrequently this season it was refreshing to see him come up to match speed immediately.

Expect Henderson to slot back in for the visit to London on the weekend; however, Milner will have done enough to ensure Klopp knows he can be relied upon to do a job.

The trio of Henderson, Can and Wijnaldum should feel Milner breathing down their necks after this performance.

The Perfect Bounce For a Trip to Wembley

No matter what happens in the FA Cup, the travelling Kop are guaranteed at least one trip to Wembley—this coming weekend away to Tottenham.

Spurs return from the Bernabeu off the back of a respectable draw against the defending champions in Real Madrid.

However, they had a more challenging fixture and will be less fresh than a Liverpool side who hit Maribor for seven in what was in essence a training fixture.

Henderson should return to take the captain’s armband and a late cameo by Alex Oxlade-Chamberlain, scoring his first Liverpool goal, could have done enough to earn a start at a ground which has so far been unkind to Tottenham.

Liverpool—like all of Spurs’ opponents—will be buoyed by a trip to the home of English football, as will those who travel to support them.

With the talk of late being how Liverpool have been unable to score when it matters, this result should do wonders for a side that were always due to give some unsuspecting side a good going over.

With Salah, Firmino and Coutinho all on form in Maribor the weekend trip to London could be one to look forward to after a disappointing few weeks in the Premier League.