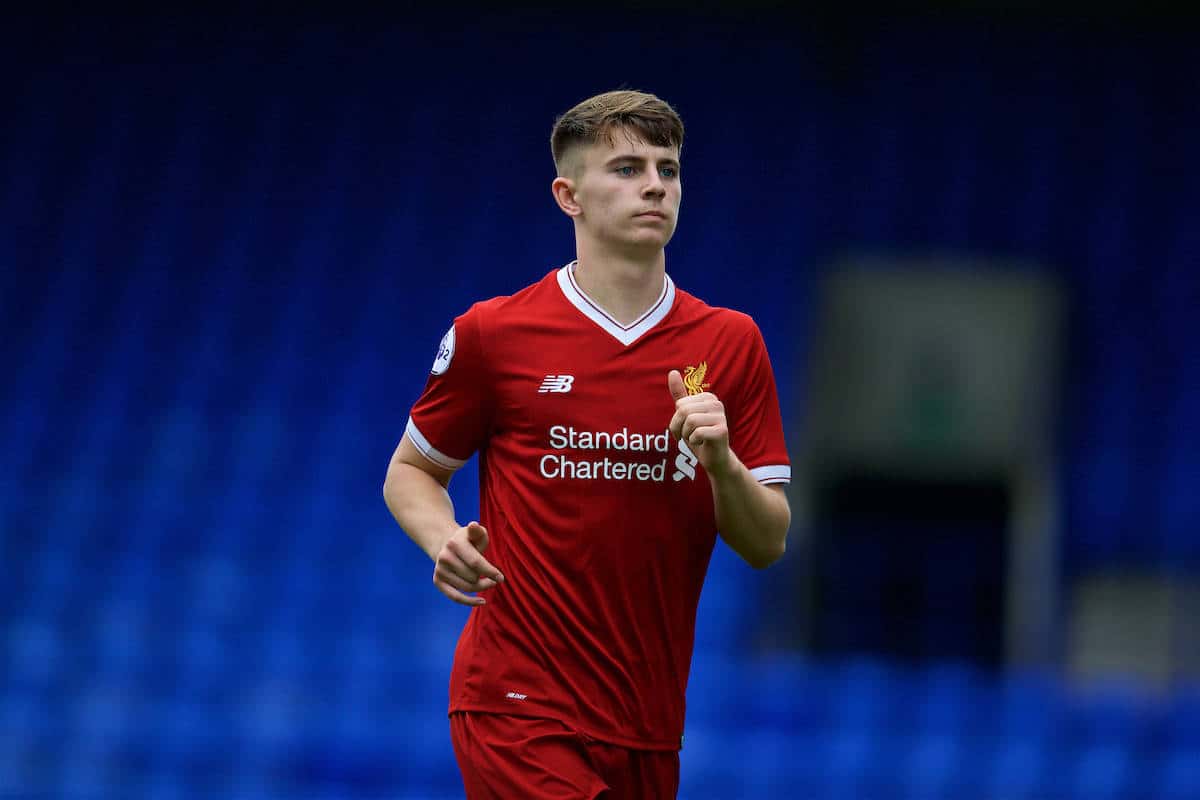 Before the senior side under Jurgen Klopp ran out 7-0 victors on Tuesday, the younger Reds had already sealed a goal-laden win of their own, 4-1 in the U19s version of the Champions League.

The side, managed by U18s boss Gerrard, fielded some unfamiliar faces and a 3-4-3 system due to injuries—but Woodburn was a stand-out performer in a central midfield role, justifying Gerrard’s decision to make him captain.

Gerrard noted that stepping back down from first-team level to the Academy teams hadn’t meant a drop-off in Woodburn’s performances, with that attitude being exactly what was required to continue his progression.

“I think Ben needs to play at the moment so if Jurgen doesn’t need him at first-team level it’s an excellent opportunity to come and play with his friends who he came through the system with; be the captain and leader in this team and set the example,” Gerrard said, per the Echo. “I thought he was excellent as an eight, controlling the middle of the pitch for the majority of the game.

“I am pleased with Ben because his attitude and mentality when he comes down to train at the Academy is 10 out of 10. That gives everyone a lift.

“We all know Ben is going to play different types of football this year, he knows that and is happy with that.

“The challenge is when he comes down to this level can he approach it like a first-team game and so far he has been excellent. I think the reason we are getting positive performances is because everyone is bouncing off him.”

On the captaincy, Gerrard cited Woodburn’s growing experience at senior level as a key reason for the decision and suggests the young attacker is handling the job well. “Ben deserves that responsibility. He has good knowledge having been around the first team for a year and he has had some international experience so he is further down the line than all of these players.

“I also know he is a positive influence around the dressing room. I haven’t just given Ben the captaincy because he is Ben Woodburn, he has got it on merit and he will lead by example in his performances.

“He has done that in training and he has also done it in the games so we are really happy for him.”

Meanwhile, Gerrard also praised the application and off-the-ball improvement of Bobby Adekanye in the game. “He’s let his football do the talking. It is about when your opportunity comes along to move up. You come in and do yourself justice.

“I thought Bobby was excellent as was Rafa [Camacho] and the two young lads at centre-half (Anthony Driscoll-Glennon and Rhys Williams), so moving forward picking a team at under-19 level I’ve got big problems, but good problems.

“The thing with Bobby is consistency.

“I think he understands now what it is to play for a club like Liverpool at the highest level. Where you have to not just be talented on the ball and look good on the eye, you have to do the dirty side of the game as well.

“You have to compete, run back and tackle and carry out a job within a system, otherwise managers don’t trust you.

“When I came in I saw Bobby doing only one side of the game, coming alive when he got the ball. I was more pleased with Bobby’s performance out of possession without the ball because I thought he put in a shift in for the team.

“I know what he can do on the ball but can he become more of a complete footballer?

“Working with Mick Garrity, Critch (Neil Critchley) and Alex (Inglethorpe), who are working tirelessly with him, I can see the other side of the game coming in.”