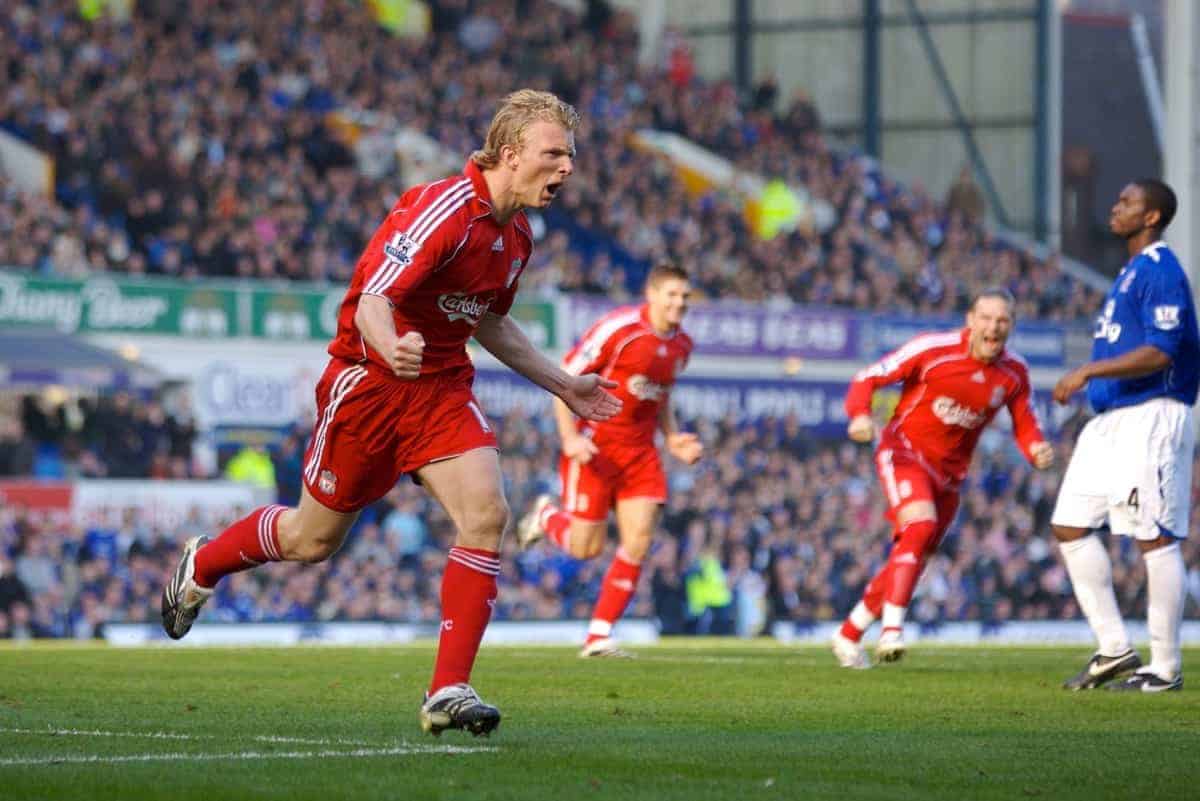 Dirk Kuyt enjoyed many great moments in a Liverpool shirt, but none made him more of a hero than his heroics against Everton a decade ago.

A 2-2 draw at home to Tottenham in their previous Premier League game left Liverpool fourth in the table, and only victory would do against Everton in order to stay in touch with leaders Arsenal, nine points ahead.

Named in the starting lineup was Kuyt—a player who had failed to set the world alight in his first 14 months at Anfield, despite his penalty against Chelsea sending the Reds into a second Champions League final in three years.

Seventeen goals in 58 appearances was a far from eye-catching return from a player signed to be a finishing machine, and there were doubts over his long-term future in the side.

With Fernando Torres and Steven Gerrard showing signs of developing into one of Europe’s most devastating attacking duos, Kuyt had found himself shifted to the right wing, and he admitted that it was a tough time in his career. “During summer 2007, while I was relaxing on holiday in Aruba, I read that the club had signed a certain Fernando Torres,” Kuyt told FourFourTwo.

“During the next season, I experienced a difficult period: my father passed away, and on the pitch, I didn’t play quite as well in the first couple of months.”

As fate would have it, Kuyt was deployed centrally for the derby, with a groin injury for Torres seen as a major blow prior to a crucial game.

We needn’t have worried, with Kuyt about to decide one of the most dramatic derbies of all time. The Dutchman lined up in attack alongside Liverpool flop Andriy Voronin, with Gerrard in the right-sided role that had seen him win the 2005/06 PFA Player of the Year award.

Javier Mascherano and Momo Sissoko anchored the midfield, Yossi Benayoun provided a spark on the left and the back five of Pepe Reina, Steve Finnan, Jamie Carragher, Sami Hyypia and John Arne Riise was a dependable unit.

There was no doubt that Liverpool were favourites to get the win, with Everton languishing in mid-table and suffering three defeats in their previous four league games.

Voronin and Riise had first-half chances that came and went, as the visitors enjoyed the better of things, before disaster struck shortly before half-time.

Hyypia, one of the most consistent centre-backs Liverpool have ever had, skewed a clearance horribly, and the ball flew past Reina and in off the post.

To come from behind at Goodison, against a dogged Everton side managed by a pre-Man United David Moyes—in other words, his reputation was still intact at that point—would take some doing. The match turned in an instant early in the second half, as the marauding Gerrard was hauled down inside the area by Tony Hibbert.

The skipper, in that brilliant “don’t you know who I am?” style of his, persuaded Mark Clattenburg to send the right-back off, and it was Kuyt who was given the chance to equalise from the spot.

A giant heart and big-game mentality was something Kuyt possessed throughout a fantastic playing career, and he nervelessly sent Tim Howard the wrong way to score his first league goal of the season.

There was still so much to come from the lovable forward.

He laid on a wonderful opportunity for Riise, which the left-back fired over, and was also denied by Howard as Liverpool pressed for a winner.

With 63 minutes on the clock, one of great let-offs in Reds history occurred, as Kuyt flew in two-footed on Phil Neville but somehow only received a booking. You had to admire the recklessness of it. Gerrard was then inexplicably replaced by a young, unpopular Lucas Leiva—the kind of baffling but almost commendable decision that Benitez would make now and again—as the drama continued.

The stage was then set for Kuyt to etch his name into derby folklore in stoppage time, as Neville’s handball on the line from Lucas’ effort saw another penalty awarded and Everton reduced to nine men.

It was one of those moments that left you sick with nerves, and when Howard guessed the right way, Reds hearts across the globe sunk.

Fortunately, though, the ball squeezed through the American and into the net, leading to incredible celebrations in the away end.

There was still time for more controversy, as Clattenburg waved away Everton protests after a blatant foul by Carragher on Joleon Lescott inside the box, before the final whistle was blown.

Few derby wins have felt that glorious, partly because of the drama and partly because Everton were so hilariously on the wrong end of bad decisions.

Any player who scores a last-minute winner for Liverpool at Goodison will forever be a hero—see also: Gary McAllister and Sadio Mane—and it was an afternoon that saw Kuyt’s reputation soar. Far more gifted individuals have played for the Reds over the years than Kuyt—players with more pace, skill and creativity—but few have been more effective and consistent.

He was a dream player to have in the team, working his socks off, showing intelligent movement and containing a winning mentality, and his big-game ability was second to none.

On nervy European nights, it was Kuyt who often delivered, and Premier League rivals such as Man United, Chelsea, Arsenal and Everton were on the wrong end of his goals so often.

Kuyt ended up becoming a very different player to the one Liverpool signed—83 goals in 122 games for Feyenoord suggested he would be a top centre-forward for the Reds—but he made the right wing role his own, and was a key man during the peak years of Benitez’s reign (2006-2009).

It is difficult to think of a more genuine, likeable person to don the red jersey, and by the time he left in 2012, he was regarded as one of the most successful foreign imports Liverpool have had in the Premier League era.

The penalty against Chelsea, hat-trick against United, last-minute strikes at the Emirates and the Etihad and endless other match-turning strikes were all much appreciated.

But it is Kuyt’s derby heroics that will forever be his most iconic day at the office for Liverpool.

It would be great to see him back at the club in some sort of capacity one day.