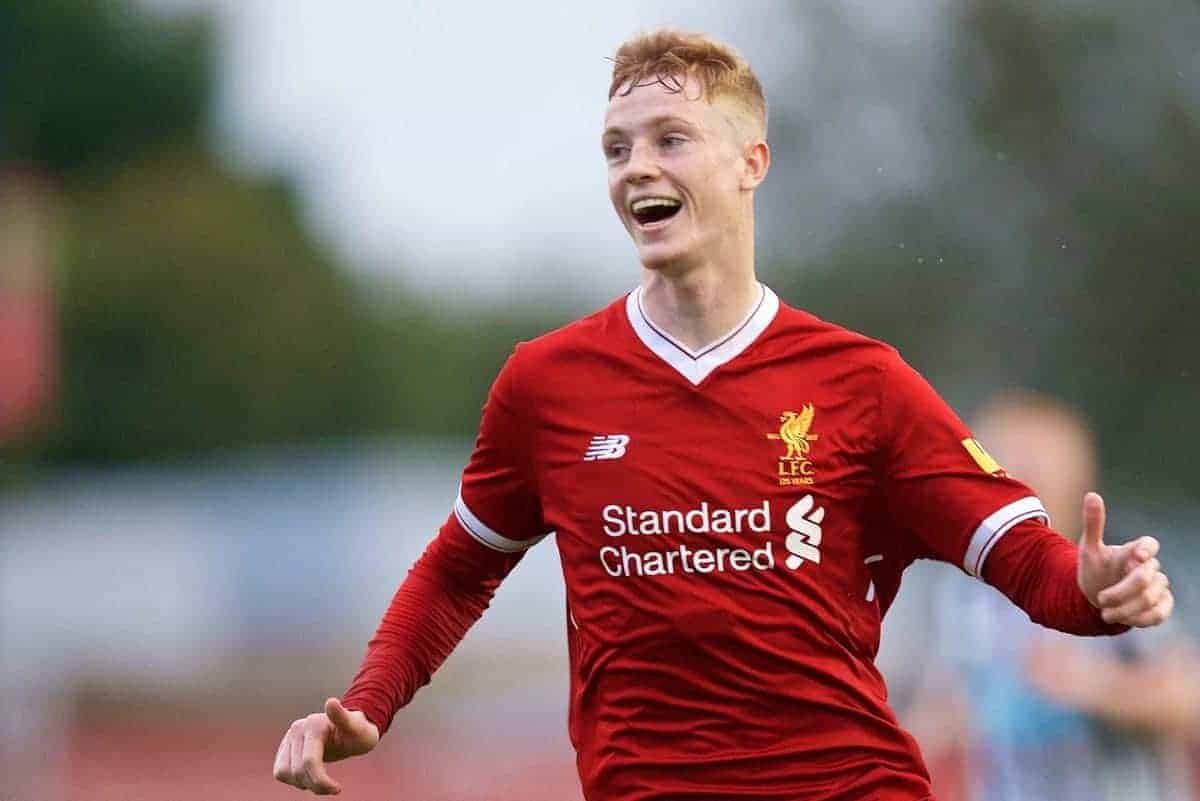 The latest in our series of Liverpool FC academy profiles, we take a look at striker Glen McAuley, Steven Gerrard’s unsung U18s goalscorer.

Rhian Brewster‘s success with England at the U17 World Cup, winning the tournament’s Golden Boot after scoring eight goals in six games, has shone the spotlight on Liverpool’s latest big hope.

The 17-year-old has already made the step up to Neil Critchley‘s U23s squad on Merseyside, and has trained under Jurgen Klopp at Melwood, as well being named on the first-team bench last season.

But Brewster’s rise has masked another crop of attacking talent in the Reds’ academy ranks, one of those being Republic of Ireland youth striker McAuley.

McAuley made his name in inauspicious surroundings in Ireland, having been born in Tallaght, south Dublin and turning out for Crumlin United, Robbie Keane’s boyhood club, before moving to St. Joseph’s. A Shamrock Rovers supporter as a youngster, McAuley courted interest from Man City, Chelsea and Man United for his performances with St. Joseph’s, with Alex Ferguson looking to tempt him to join with face-to-face talks in 2013.

But such was Brendan Rodgers’ commitment to bringing McAuley to Merseyside, the striker agreed to join the Reds in 2014, signing a pre-contract agreement with the club.

He visited Kirkby at regular intervals while still playing for St. Joseph’s, before making the move to Liverpool on a permanent basis after his 16th birthday, in 2016.

This saw McAuley follow a similar trajectory to compatriot Conor Masterson, who signed with the Reds at the age of 13 in 2012, continuing to cut his teeth with Lucan United until 2014.

McAuley had already featured for the young Reds in the Milk Cup in 2015, scoring a clutch of goals as his side reached the semi-finals, ultimately losing to Southampton.

These performances clearly caught Critchley’s eye, as the then-U18s manager drafted him into a key role in 2016/17. Critchley initially eased his new arrival in slowly, but McAuley was clearly eager to make an impression, scoring on his U18s debut in a 4-0 win at home to Blackburn Rovers.

He came off the bench in the following 2-1 win away to Man United, and then in a 7-0 humbling at Man City that prompted Critchley to shake up his squad.

McAuley made his first start for the U18s in the fourth game of the season, lining up alongside Brewster in attack and supported by another of Gerrard’s promising young talents, Liam Millar.

It took McAuley just 16 minutes to find the back of the net, doubling his tally 10 minutes later as the young Reds stormed to a 3-1 victory over Stoke City at Kirkby.

The teenager went on to make 26 appearances in the U18 Premier League last term—including 17 starts, losing only two of those—averaging 60.9 minutes on the field per game.

He scored a remarkable 16 goals, including strikes against former suitors City and United.

The U18s did not lose once in the league when McAuley hit the back of the net last season, suggesting Liverpool had pulled off a coup when Rodgers convinced him to make the switch. McAuley is a tall, rangy No. 9 with a keen eye for goal, but while Critchley has described him as “an old-fashioned centre-forward,” there is more to his game than finding the back of the net.

Adept in a variety of positions, McAuley often drops deep and drifts wide to influence play, and is particularly useful cutting in from the left flank onto his natural right foot.

His creative play is impressive, and he keeps his head up when on the ball, seeking out a pass to scythe through the opposition’s defence.

And citing Diego Costa as his role model in attack, McAuley looks to add aggression to his play leading the line, utilising his physicality and chasing down loose balls.

Most prominent, of course, is McAuley’s quality in front of goal, with the Irishman a predator on the edge of the six-yard box, capable of scoring with his left, right and his head.

This has led to a key role for the Republic of Ireland U17s, too, but after his goals helped seal a place at the U17 Euros in the summer, he was forced to pull out due to “personal reasons.” This will no doubt spur him on, however, and 2017/18 stands as a crucial campaign as McAuley looks to make his mark working under Gerrard at U18 level.

He has been a regular feature in Gerrard’s starting lineup in the league this season, and has been scoring and assisting prolifically, including a brace in August’s 2-2 draw with Newcastle United.

His challenge, however, is presented in the UEFA Youth League, as he is fighting a battle for a starting spot with the likes of Brewster, Millar, Bobby Adekanye, Ben Woodburn and Rafa Camacho.

McAuley signed his first professional contract with Liverpool a month after Gerrard returned in a coaching role at Kirkby, and the 37-year-old has urged him to improve his hold-up play.

It may that McAuley’s designs to be the next Costa will earn him a starring role on Merseyside in the future.