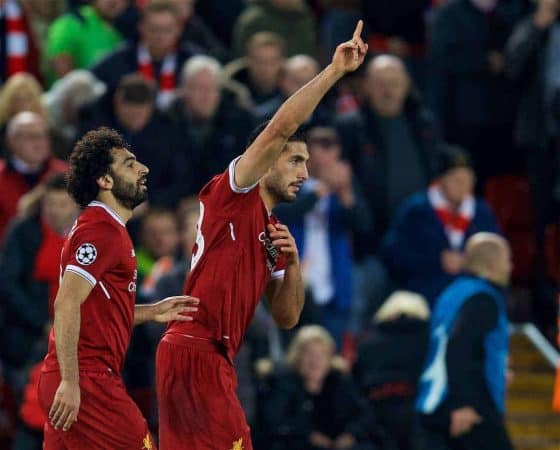 Liverpool eventually earned a comfortable victory to maintain top spot in their Champions League group, thanks to second half goals from Mohamed Salah and Emre Can.

Jurgen Klopp made four changes to the side, bringing in Loris Karius, Trent Alexander-Arnold, Emre Can and Alex Oxlade-Chamberlain – the latter making his first home start for the club.

An injury to Gini Wijnaldum in the opening 15 minutes saw Jordan Henderson replace the Dutchman, with Can moving from the holding midfield role to allow the captain to take up his regular place.

Maribor sat very deep, happy to cede possession to the home side, chances were therefore few and far between.

Two Oxlade-Chamberlain crosses produced the best two chances of the first-half. First, Firmino’s header was deflected then tipped onto the bar. Shortly after, Emre Can failed to get a connection on a header when completely free six yards out.

Half time saw no goals, with the pattern of the game very similar to four days earlier against Huddersfield.

And similar to Huddersfield, Liverpool pushed more in the early stages of the second half and quickly took the lead.

Mohamed Salah scored his 10th goal of the season, flicking home a lovely low cross from Alexander-Arnold on the right.

And in another similar tale from the Huddersfield game, Liverpool then saw a penalty saved. James Milner was back on spot-kick duty, taking up the penalty after superb play from Firmino inside the box.

It was, in fairness, an excellent save from the goalkeeper. But it meant Liverpool have now missed their last four penalties at Anfield and Milner his last two after scoring seven in a row before that.

Soon after, Firmino almost scored himself, the keeper blocking well with feet. And then Salah had a huge chance to make it 2-0 but headed over when completely free five yards out.

The Reds did eventually get the second goal, and a lovely one it was too. A superb one-two from Emre Can saw the German dispatch the ball past the keeper low down with an accurate finish.

It was 3-0 just before full-time, substitute Daniel Sturridge dispatching Alberto Moreno‘s cross with a powerful shot from close range.

The result leaves Liverpool in control of group E, although Sevilla’s win over Spartak Moscow means it’s tight at the top. The Reds’ next Champions League game is away to the Spaniards.