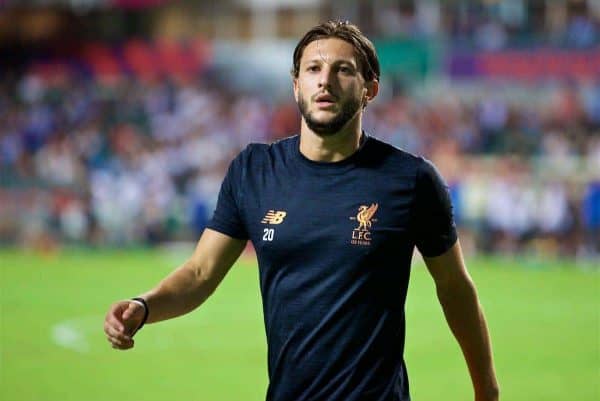 Liverpool will play a behind-closed-doors friendly at Melwood next week as Adam Lallana nears his return to full fitness after a thigh injury.

Lallana is yet to make an appearance for the Reds this season having been sidelined since the Audi Cup defeat to Atletico Madrid in pre-season.

The midfielder’s absence has been felt, with his energy and tenacity in midfield missing at stages this season, along with his creativity and dribbling ability.

Jurgen Klopp is set for a major boost for Liverpool’s next outing at home to Southampton on November 18, therefore, with Lallana expected to be fit to feature.

And according to the Telegraph, Klopp is organising a friendly clash at the Reds’ training ground to aid Lallana’s recovery.

“Should he come through unscathed next week, he would be in contention to face his former club,” Chris Bascombe writes.

Klopp will be able to work with a strong group for that friendly, against as-yet-unknown opposition, including Joel Matip, James Milner, Alex Oxlade-Chamberlain, Mohamed Salah and Daniel Sturridge.

He is also likely to involve a host of young players, which could provide Rhian Brewster with his first opportunity to impress Klopp since his triumphant return from the U17 World Cup.

Brewster scored a hat-trick in a 5-0 friendly win over Wolves this time last year, with Joe Gomez making his first appearance in 13 months following an ACL injury.

Gomez is likely to earn his first England senior cap in the current international break, marking his phenomenal rise since returning from his time out.

Danny Ings was another player to benefit from a behind-closed-doors clash in 2016, with the striker scoring twice in a 5-0 win over Bradford City last October.

He made only his second first-team appearance of the campaign just over two weeks later, though this was unfortunately marred by another knee injury.

Those youngsters included next week will be hoping to make an impression like Ovie Ejaria in last September’s 2-1 friendly loss to Huddersfield Town, scoring the Reds’ consolation goal.

After that performance in front of Klopp, Ejaria was regularly named in the Liverpool squad, making eight appearances in 2016/17, with a further eight games on the substitutes’ bench.

The focus will be on Lallana this time out, however, as the 29-year-old’s return to the fold can provide the Reds another lift after the break.