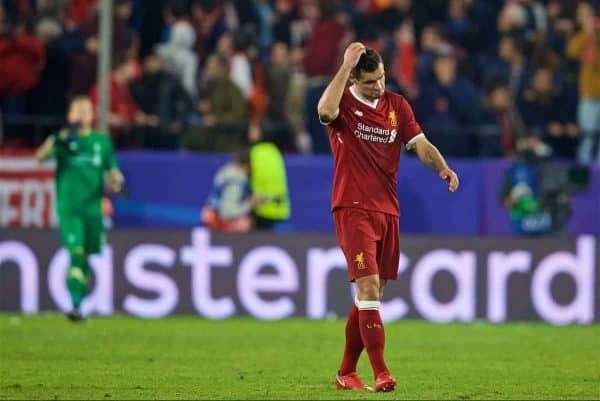 How Liverpool’s capitulation against Sevilla impacts on busy December schedule

Liverpool’s 3-3 draw with Sevilla once again exposed a host of flaws within the team, but the result also impacts on a relentless December fixture list.

Just when you thought you had seen this Reds side fall to pieces enough times, they go and repeat the trick at the Ramon Sanchez Pizjuan.

Jurgen Klopp‘s side were scintillating in a first half that saw them 3-0 up at one of the toughest grounds in Europe, with the hosts unbeaten there in a year.

While most top sides couldn’t fathom surrendering such a lead, even the most positive Liverpool supporters among us couldn’t feel too safe with the scoreline at the break. We’ve seen it all before.

As soon as Wissam Ben Yedder pulled one goal back, following an infuriatingly needless foul from Alberto Moreno, there was a horrible inevitability about what would happen next.

On the face of it, a point away to such a formidable side has to be considered a positive result, with Champions League qualification still very much in Liverpool’s hands.

There is far more to it than meets the eye, however, with the manner of the capitulation galling, and the Reds yet again showing no backbone.

Perhaps most frustrating is the fact that their final Group E match with Spartak Moscow is now hugely significant, with defeat at Anfield likely knocking Klopp’s men out of the competition.

At half-time, columns were already being prepared on which Liverpool players could benefit from starting what looked like a dead-rubber clash against Spartak.

It looked as though top spot in Group E was about to be confirmed, before the Reds showcased one of their infamous meltdowns to the world again.

Much has been made of Liverpool’s taxing December schedule, with eight matches between the second and 30th day of the month.

There are two sets of midweek fixtures, and the Christmas and New Year period see Klopp’s side take on Arsenal (A, Dec 22), Swansea City (H, Dec 26), Leicester City (H, Dec 30) and Burnley (A, Jan 1) in a nine-day spell.

With so many games coming thick and fast, but key players constantly required in order to stay in the Premier League top-four battle, a meaningless European game would have been ideal, essentially acting as a friendly.

Klopp would have been afforded the luxury of blooding fringe players such as Andrew Robertson, Marko Grujic, Ben Woodburn, Daniel Sturridge and Dominic Solanke, and key men would have enjoyed a night off.

Instead, that match now acts as one of the most important of the month, with defeat something not even worth thinking about.

To crash out at the group stage, having thrown away leads to Sevilla twice, would be a major disappointment, and it could easily impact negatively on Liverpool’s league campaign, too.

There would be the added burden of Europa League football to tackle, for starters, with the Thursday-Sunday factor always problematic.

In theory, Liverpool should still qualify with relative ease, considering they only need a draw against a team who failed to beat Maribor on two separate occasions.

They have made life so much harder for themselves though, as they always seem to, and it has made team selection throughout December far trickier for Klopp.

A trip to Brighton & Hove Albion comes four days before the meeting with Spartak, which will not be easy against a side treating it as a ‘cup final’, before the 229th Merseyside derby at Anfield the following Sunday.

That could mean three matches in a week for a number of important figures—all this could have been avoided with a lot more professionalism and mental strength in Seville.

After the spinelessness on show against Tottenham last month, it really felt as though Liverpool had turned a significant corner.

Four wins in succession were recorded, against Huddersfield Town, Maribor, West Ham and Southampton, and it was all done with such ease.

They ended up failing their first major test since Wembley spectacularly, however, even though the first half was superb and Sevilla impressed greatly after the interval.

This weak mentality is becoming a huge issue, mainly away from home—that’s now 22 goals conceded in 11 away games this season—and if it doesn’t improve, Liverpool’s 2017/18 campaign will peter out.

The Reds’ game management also has to improve drastically, whether it be Klopp’s use of substitutes, the players’ inability to master the dark arts or simply finding balance and poise.

In terms of quality of football, only Man City are more impressive in the country right now, but all of Liverpool’s top-six rivals are more ruthless and consistent.

If the Merseysiders fall short in their quest for Champions League football again next season, and also drop out of Europe early this time around, it will be because of in-game ineptitude.

Hopefully, Tuesday’s disappointment will have seen Klopp lambast him players, and a response will come for Saturday’s crucial clash with Chelsea.

These sloppy performances cannot keep happening—December has already been badly affected by one of them.