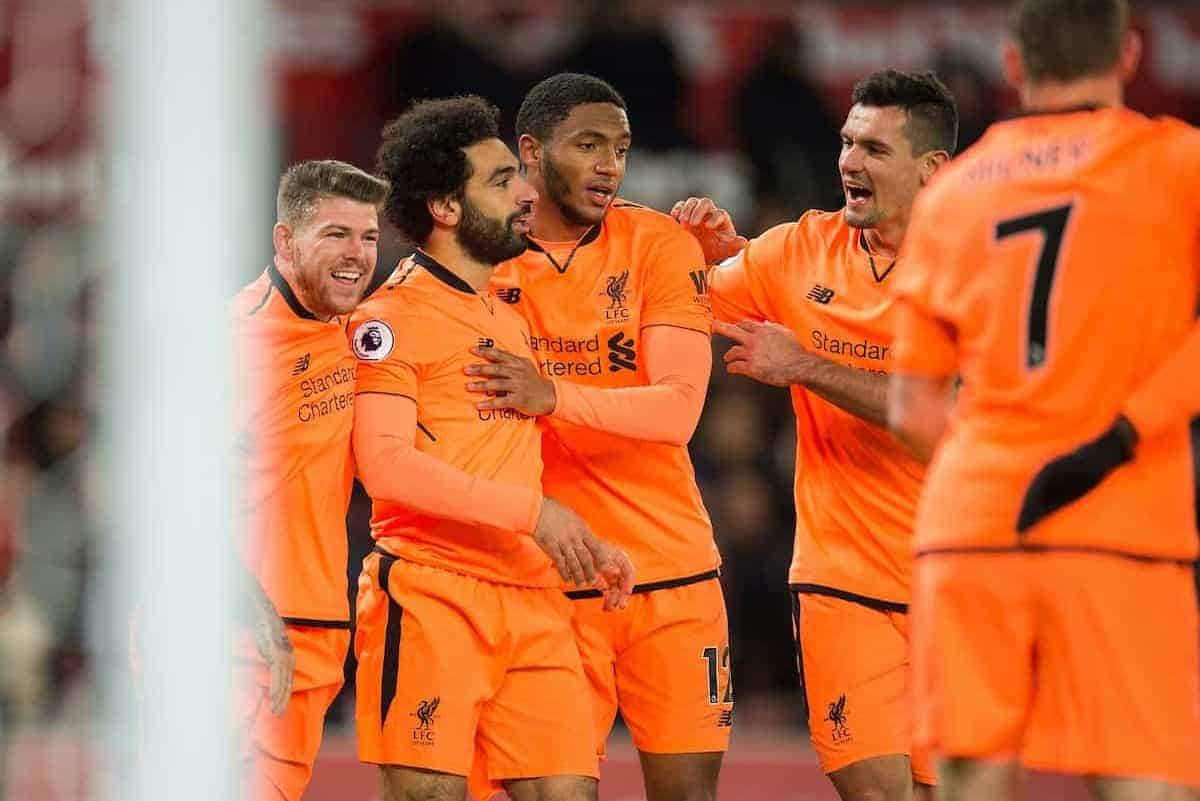 Liverpool produced a strong performance to see off Stoke City and move back up to fifth place in the Premier League on Wednesday night.

Jurgen Klopp continued to rotate his side as the Reds entered a busy period of the season, handing starts to the likes of Emre Can, Dom Solanke and the fit-again Dejan Lovren.

The personnel changes meant a system switch for Liverpool too, with a 4-4-2 paying early dividends as the Reds dominated possession and created chances aplenty.

Sadio Mane clipped home the opening goal after Stoke appealed that the cut-back from Joe Gomez had gone out of play, with Solanke feeding it through for Mane to finish.

Solanke and Mane both missed glorious chances to double the lead, either side of Simon Mignolet being booked for taking down Mame Diouf right on the edge of the box—thankfully just outside—and it remained 1-0 at the break.

A tense second half flowed back and forth, but the introduction of Mohamed Salah was key: he hammered in a thunderous volley from Mane’s cross to double the lead, then ran down the defence to win the ball and slot home the third.

Here are the five biggest talking points from the 3-0 win at Bet365 Stadium.

Joe Gomez at right-back, Alex Oxlade-Chamberlain ahead of him in midfield.

It’s not often that the Reds will play with a four across midfield, but the duo were exceptional at Stoke, both individually and as a pairing.

Gomez was exceptional defensively, shackling first Eric Maxim Choupo-Moting and then Jese with great determination, reading of the game and no shortage of pace. Game by game, the England international continues to mature and impress in equal measures.

Ahead of him, Oxlade-Chamberlain was a good outlet for the team on the counter, but he also tracked back, worked relentlessly for an hour and had the beating of his man on the run.

It’s important to build understandings in partnerships and while this one might not be in place every week—Salah usually plays as the right-sided forward—it’s great to see another success with an altered tactical formation.

Gomez and Chamberlain are a genuine option for Klopp, doubling up in both halves of the pitch, and even when not starting they can be a strong duo to get past when trying to close out games in future.

Out of the team for a few games and given a chance to stake his claim once more, Emre Can failed to impress in the slightest at the heart of the Reds’ midfield.

In a double pivot alongside Gini Wijnaldum, the duo would be expected to both work forward and track back defensively in tandem, yet often in the first half the German left his Dutch team-mate alone in the middle, outnumbered, while he roved in between the two forwards.

More than once Stoke were able to win dangerous second balls in the box due to a lack of midfield cover in front of the defence once again, and only poor Joe Allen finishing kept the Reds ahead at times.

It was undisciplined, and Can was sloppy in possession far too often even before he lost the ball and had to pick up a trademark yellow card for dragging back his man.

Contract situation or not, any player given the nod to pull on the shirt should be focused, determined and ready to put in a big performance in a key role. Sadly very little of that was on show from the No. 23.

Liverpool fans must be wondering if this is merely the beginning of the end, and Can’s contract situation will be cleared up sooner rather than later—in terms of him heading elsewhere.

Funny how a result influences opinion: All the changes, the full league debut for Solanke, Salah on the bench—points dropped, and fans might have been highly critical of the risks taken.

As it is, with three points wrapped up, Klopp gets full credit for his judgement and rotations.

Philippe Coutinho got the night off, as did Jordan Henderson other than a last-minute run-out.

Salah played only around 25 minutes—more than enough, clearly—and the likes of Mane, Solanke, Lovren, Milner and Firmino all saw game time after not being involved either in the last game or over the past few weeks.

Good going—now for it to continue over the coming weeks and matches. A brave decision was taken by Klopp to hand Solanke his first Premier League start, and while the young striker played reasonably well he’ll be cursing having missed his big chance to score.

Solanke showed good approach play, linked nicely with the wider midfielders at times and more than once exchanged passes with Roberto Firmino, his strike partner.

It was the latter which gave Solanke his one-on-one chance but he perhaps took the shot on a little early, side-footing from the edge of the box when another touch forward might have opened up his options rather more.

Still, he can claim an assist for Mane’s goal and his 66 minutes on the pitch were largely productive.

Was it enough to earn further game time? Considering the plight of Daniel Sturridge and how much he has to do to feature under Klopp, probably not—at least not yet.

Not having Salah in the team would have had a few fans fearing for the outcome, but Liverpool were close to the three points even before he entered the pitch.

But, such is the Egyptian’s form, that bringing him on for the closing stages was nothing short of a masterstroke.

Stoke were stretched and Salah—with Mane still on as well—had the pace and energy to exploit the space and initiate counter-attacks.

Two more goals: that’s 11 strikes, plus two assists, in his last nine appearances in Red. And only three of those games have seen Salah stay on the pitch for the full 90 minutes.