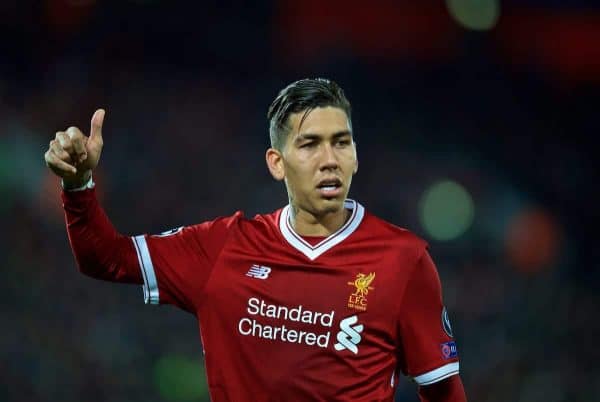 Liverpool eased to a 3-0 victory over Maribor on Wednesday night, as the Reds remain top of their Champions League group.

It was a win that never really felt in doubt, even in the mind of the most pessimistic supporter.

Despite a goalless first-half, Liverpool’s quality was always going to shine through, and goals from Mohamed Salah, Emre Can and Daniel Sturridge were the difference between the two sides.

James Milner did miss a penalty, which was the only real negative on the night, and it was a job done in solid but unspectacular fashion by Klopp’s men.

Here’s how supporters reacted to Liverpool’s 3-0 win at home to Maribor on Twitter and our forums.

Andrew Robertson was once again left out of the starting lineup, and supporters were rather bemused by the decision:

Robertson couldn’t buy a start right now, while not as good as Moreno this season he’s done well when called upon. Strange.

Klopp didn't use Moreno for a whole season and now he's first choice. I'm sure there's a plan in place with Robertson.

Moreno has had a knock and still starts ahead of Robertson. Something is off about this.

Liverpool almost entirely bossed things in the opening 45 minutes, but the performance was a little flat and supporters felt frustrated.

Nearly 30 minutes in and still deadlock with no clear chances. Hmm.

Highlight so far: the lads with the rakes. Eight attacking the Kop end as I type.

Big fan of Emre, but he's really annoyed me. Should've scored that header and made a few bad decisions.

HT: #LFC 0 Maribor 0: Slovenians have parked the bus and Liverpool haven't looked like finding a way past it. No spark/guile

The only players trying combo passing are Trent & Salah on the right. Moreno is not using the width well. Lack of midfield guile issue again

I don’t profess to be an expert but surely we can sacrafice a deeper player for Sturridge and get more goal threat on?

Sturridge on for Karius imo

Just three minutes into the second-half, Liverpool were ahead, as Salah eased the nerves inside Anfield with a back-heeled finish from Trent Alexander-Arnold’s pinpoint cross.

Clever from Salah, great cross from Trent, goal at last.

“Different side this half. Well done Kloppy.”

– theres always tomorrow on the forums.

A 10th goal already for Liverpool for Mo Salah. A magnificent signing, and a bargain.

Milner was then denied from the spot, as the Reds’ woes in that area continue. They have missed all four of their efforts at Anfield in 2017.

That is a brilliant save.

Klavan on penalties, imagine the run up.

Liverpool have now missed five of their last seven penalties.

Can doubled the lead after a sumptuous move, firing home after a delightful one-two with Milner.

Quick combo passing. That's one key way to break through packed defences. We need to do more of it, like Emre just did. 1-2 goal.

“What a brilliant worked goal, Can.”

Town if we do two Benitez style 'Terrible first half, 0-0 half time, comfy win' games in the space of 4 days.

After Sturridge’s late strike and the final whistle, fans gave their assessment of the performance, on an adequate night on Merseyside.

Great result. Any time you win 3-0 in the CL you can't complain.

“Not a European classic but an important win none the less. Moreno’s resurrection continues and fine Can goal. Let’s top the group.”

– Rooster on the forums.

For the positive, LFC are top of Group E. For the negative, this win guarantees minimum of Europa League qualification…

Well, Jürgen Klopp called for consistency…
Another drab first 45 against a disobliging side, which ends 3-0. With a missed pen again too!