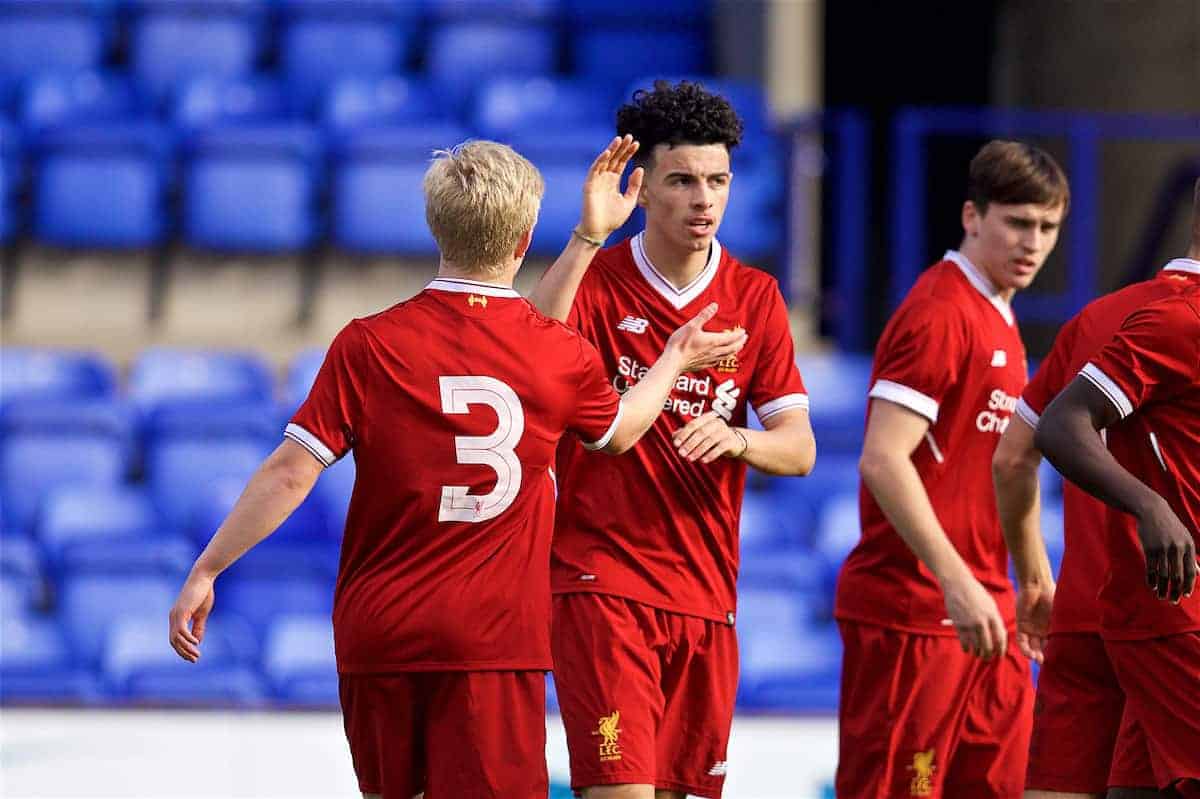 Steven Gerrard’s Liverpool side eased to victory in their fourth UEFA Youth League game with a 3-0 win in Birkenhead.

Early goals from Curtis Jones and Ben Woodburn made the home side’s dominance count on the scoreboard as they went on to create numerous opportunities throughout.

But it was Maribor who had the first chance of the game when centre-forward Kukovec Nino caught the defence napping and found himself one-on-one with Kamil Grabara. The striker looked as unprepared as the defence, however, and failed to make clean contact with a shot which he scuffed harmlessly away from goal.

Liverpool looked brighter after the early scare and took the lead when Jones cut inside from his position on the left wing before seeing his right-footed shot deflect past Cajnko Tibor.

Gerrard had his side set up in a 3-4-3 formation with a few players operating in roles they may be slightly unfamiliar with.

This didn’t show in their play, though, and they were on the scoreboard again shortly after Jones’ opener when striker Liam Millar was felled in the box.

Captain Ben Woodburn stepped up to take the spot-kick and tucked it into the bottom corner. Everything went through the Welshman. He was constantly involved on both sides of the game, and was also in the ear of the referee when necessary.

He’s a captain you might expect to see in a team managed by Gerrard, and as the best player in the side he also leads by example. His refusal to shake an opponent’s hand after being fouled for the umpteenth time may have secretly pleased a few Liverpool fans, and his manager.

Further chances were created in the first half with Jones looking lively down the left wing. Bobby Adekanye was a constant threat down the right, too, but couldn’t quite make it count when through on goal.

He should have hit the back of the net with one chance in particular following good work from Jones and Millar, but he sent his effort over the bar from close range. Grabara was tested once more but Horvat Tomi’s shot was straight at him and the score remained 2-0 at halftime.

Rafael Camacho’s involvement had initially been fleeting, but when he came into the game it led to a number highlights. He made a good covering tackle in the first half to stop a counter-attack, and had a few shots on goal during the second period.

The most dangerous of these curled away from the far post at the last second after flashing across the area. He then set up Millar from the byline, but though the striker turned the ball home the linesman hesitantly flagged for offside.

Substitute Glen McAuley had a good opportunity to make an impact but he hit his shot into the stands from the edge of the six-yard box.

The back three saw some action late on, but they were able to keep Maribor out with some help from Camacho and Edvard Tagseth from the flanks.

The third eventually came when McAuley was presented with an easy chance from a Tagseth cross, and on this occasion he made no mistake. The 16-year-old Liverpudlian is one of the stand-out players in the youth set-up, and showed this again in European Competition with an eye-catching display on the left wing.

The Scouser normally operates in midfield which has led to comparisons with his manager, but he’s a different type of player to Gerrard, as shown by this outing on the wing.

The position gave him the freedom to draw on his bag of tricks as he was able to run at players down the wing or cut inside to shoot.

His goal was an example of the latter, but one particular piece of skill to beat a man in his own half temporarily roused the small crowd.

He was quieter in the second half and was eventually substituted with minutes remaining, but the future looks bright for the local lad.

As captain Ben Woodburn has moved infield from the wide position he was seen in when he first caught the eye, other players such as Jones and Tagseth are now being asked to move out wide having previously played central roles.

One of the more interesting parts of the formation was that, when attacking, right wing-back Camacho would often be the more central of the wide players, with Adekanye sticking to the touchline.

Varied use of full-backs and wing-backs is common at the top level, but Gerrard obviously feels he has players with enough tactical awareness to issue such instructions at youth level.

Millar, often utilised as a winger, used his pace in the central attacking position to great effect, and combination of size and ball-playing ability among the back three gave the team a good base.

Man of the Match: Ben Woodburn

Jones may have lit up the first half, but 18-year-old Welsh international Woodburn was at the heart of everything Liverpool did.