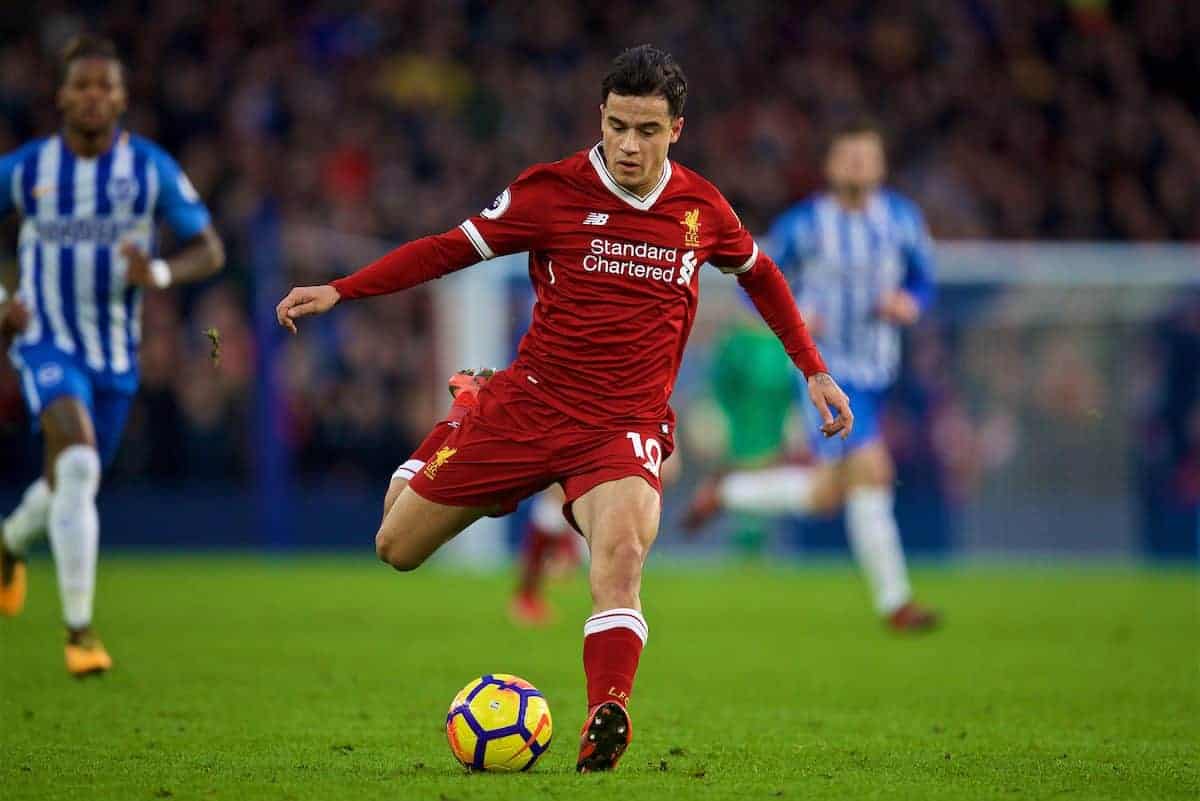 Liverpool were in sensational form as they romped to a 5-1 win away to Brighton on Saturday afternoon, leaving the travelling Kop in raptures.

Following their convincing 3-1 win away to Stoke City on Wednesday night, the Reds produced a stunning performance to take all three points on the south coast.

A brace from Roberto Firmino, goals from Emre Can and Philippe Coutinho and a Lewis Dunk own goal put Jurgen Klopp‘s side on their way to a stunning victory.

Klopp made a series of changes to his starting lineup, including a makeshift back three of Can, Dejan Lovren and Georginio Wijnaldum, and was rewarded with a fine display only hampered by a questionable penalty call.

Coutinho came in for considerable praise…

This is one of Coutinho's finest ever performances for Liverpool. Levels above anyone else on the pitch. An absolute masterclass.

Man, we should savour every moment of watching Philippe Coutinho play for Liverpool. Some of those turns in the first half were delightful.

“Coutinho really is quite good at this football thing isn’t he?”

Fantastic win. Coutinho's performance today was just ridiculous. Best individual display of the season for us?

Philippe Coutinho has a goal or assist every 62 minutes in the Premier League this season. He’s a midfielder…

Coutinho has oozed class today. Had a big hand to play in both of Firmino's goals before producing a lovely free-kick. It's clear why such a fuss was made about him this summer.

Go on @FCBarcelona, ask how much we want for Coutinho now… pic.twitter.com/PrrlODmaVc

No manager in the top 6 can do what Klopp is doing here. Beyond a miracle at times. Currently in the top 4 with a Championship quality defence. No cheque-book, just real management. I rate this man so, so highly.

Got to give Klopp a lot of credit for recent weeks, kept the team fresh, changed systems and player have slotted in seamlessly. Made a few tricky fixtures look like light work

“Who’d of guessed playing 2 midfielders in defence would be better than the normal CBs?”

They say our defence isn’t good enough so Klopp decides to put Can and Wijnaldum in our defence and we win 5-1 playing away with the one goal conceded being a penalty. ? pic.twitter.com/zCBJOfIUVO

Play a back 3 of Lovren, Wijnaldum and Emre Can….win 5-1 away pic.twitter.com/EXZwuv5NkJ

“Knew we would bang this bunch.

That was a nonsense game in the best way. Not sure it means anything in the larger picture but hey, good times and 5-1 in the books.

Truly formidable display from Liverpool today. Firmino, Coutinho, Can, Alexander-Arnold all excellent. Such an important time to win too. ??

Some result that for a makeshift side. Great stuff. Anyone that complains after that is a twat. Up the Reds.

No Salah goals and we still bang in 5.”

A truly excellent response from Klopp and the side post Spurs, who we now sit 4 points clear of.