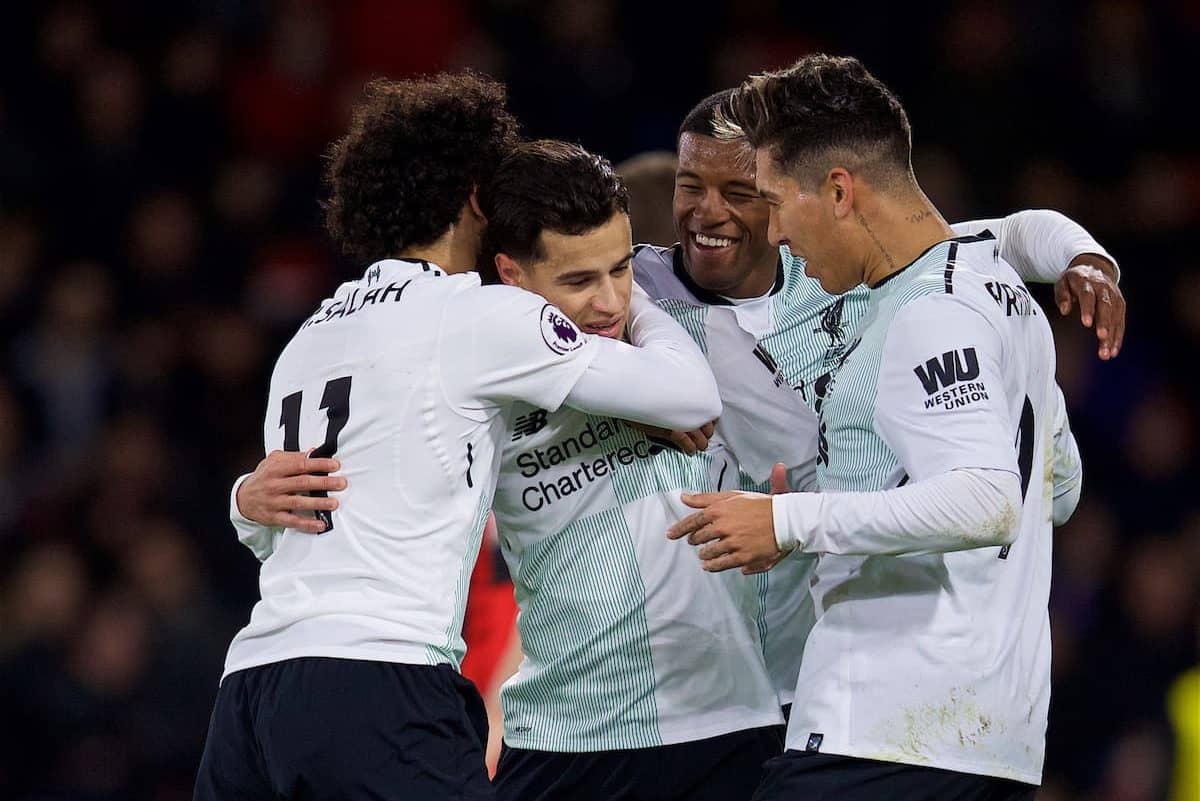 Liverpool cruised to an impressive 4-0 win over Bournemouth, with four different goalscorers on target.

After an even opening 10 minutes, Liverpool almost took the lead when Philippe Coutinho hit a sweetly-struck free-kick right on the edge of the box, his strike hit the inside of the post but didn’t go in.

The Brazilian though was on target 10 minutes later, producing a beautiful solo effort to make it 1-0. Coutinho exchanged passes with Andrew Robertson down the left, then cut inside past several defenders and placed his shot past Asmir Begovic at the near post. It was 2-0 on 25 minutes, with Dejan Lovren heading in from close range after Roberto Firmino had expertly prevented a corner from going out past the far post.

Liverpool were in control, in a very similar manner to this match last season – where they threw away their lead to eventually lose 4-3 in the dying moments of the game.

Jermaine Defoe almost halved the advantage when he broke free before half-time, but his shot thankfully cannoned back off the post.

Superb interplay between Firmino, Coutinho and Salah almost saw the latter make it 3-0 just before half-time, but he was denied by Begovic.

The Egyptian was on the scoresheet for his 20th goal of the season moments later with a superb solo goal – the first Liverpool player to hit 20 goals in a season since Daniel Sturridge and Luis Suarez in 2013/14.

Salah cut in from the right, turning Charlie Daniel inside out, before cutting inside and placing a shot into the far bottom corner. Sensational. 3-0. Liverpool started the second half looking to ensure there wasn’t a collapse like this game last season, with the home side having brought on dangerman Ryan Fraser at the break.

It was almost 4-0 just before the hour, with Oxlade-Chamberlain producing a superb tackle and powerful run but his shot rattled off the post.

It was 4-0 on 66 minutes, with Firmino heading home Coutinho’s cross from the left. That made it 50 goals for Liverpool’s ‘fab four’ already this season. A commanding lead allowed Klopp to make changes late on with Friday’s game at Arsenal in mind. Adam Lallana made just his second appearance of the season, replacing Salah for the final 20 minutes.

Dominic Solanke replaced Firmino with 15 minutes remaining, and Danny Ings got a late cameo for the final 5 minutes, replacing Coutinho.