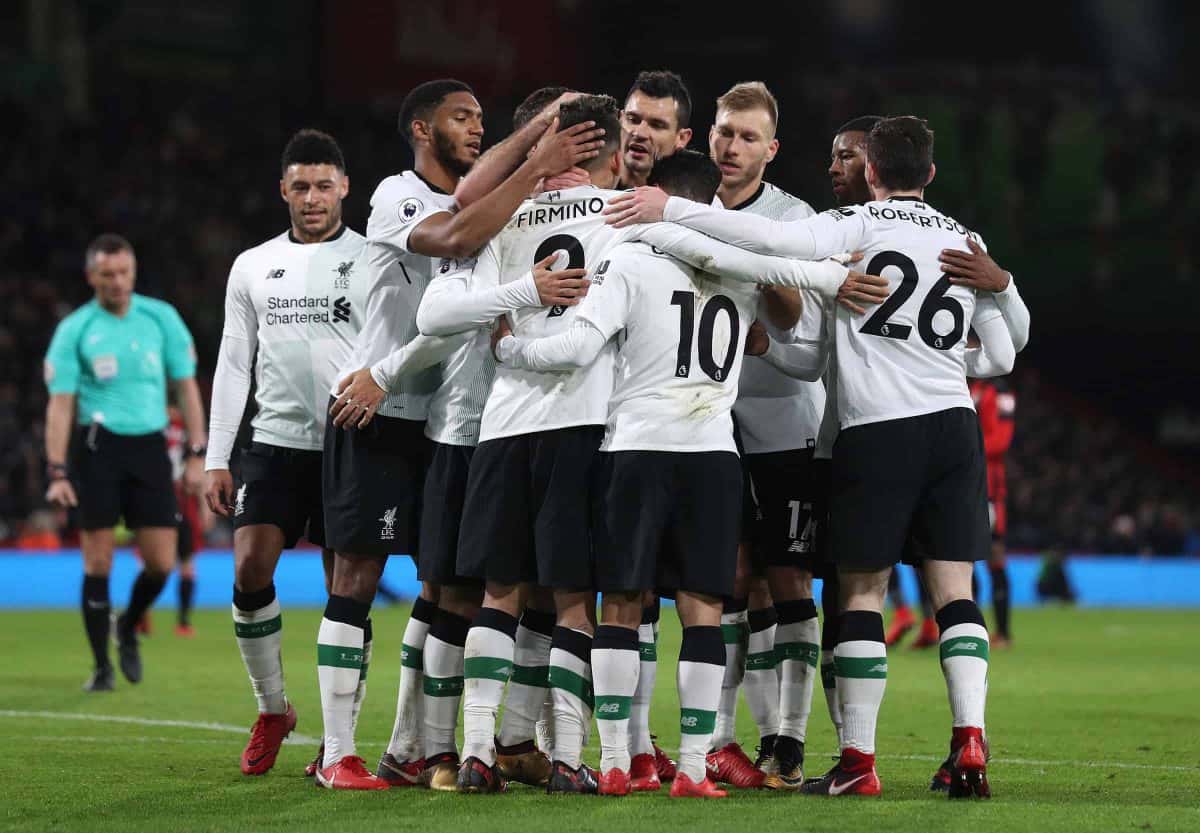 Liverpool got back to winning ways and moved up to fourth in the Premier League with a four-goal destruction of Bournemouth.

A little off with his early passing, but in truth he didn’t have too much to do in the first half.

Easily beaten by a fierce low drive by Defoe which hit the post, but then denied the same striker in the second half with a strong save, importantly pushing the ball away from another onrushing forward.

Didn’t have too much more to contend with

A difficult first half for Gomez, who was given a tough run by Charlie Daniels and Danny Pugh, going past him on the outside and getting in crosses from the Bournemouth left.

Usually Gomez is one of the better Reds full-backs at stopping delivery from wide, but he couldn’t get close enough in the first 45 minutes and a few early passes went astray too.

Improved after the break and was solid without being spectacular or offensive-minded in the second half. Targeted by the home side with some longer passes for the forwards to race onto, but held his own with the first couple of tests despite a free-kick wrongly going against him.

Lovren also showed his courage at the other end to launch himself into a diving header and score from six yards out to double the lead for the Reds.

Caught out once or twice with through passes from deep, and when asked to cover across in the channel.

Somewhat slow with his distribution and more than once he put a team-mate under pressure, leading him to feel the wrath of Jurgen Klopp from the sidelines.

The weakest member of the back line, but even he improved as the game went on, coming across to make sharp blocks more than once.

Still not a presence who offers a guarantee of reliability, but played a part in the clean sheet.

The left-back needs to impact while Alberto Moreno is absent, and he was extremely positive with his performance in an attempt to do so.

His most important contribution in the opening stages was the quick link with Coutinho and ensuing overlap, drawing away two defenders, which gave the Brazilian room to cut in and score.

Robertson was strong defensively, aggressive in the tackle more than once, and sent several of his trademark low deliveries into dangerous areas for team-mates to attack.

Made a couple of nice crossfield passes but his influence on the first half was minimal.

Henderson wasn’t really a starting point for Liverpool’s build-up play, even when he dropped between the centre-backs—he couldn’t find the gaps to break Bournemouth‘s pressing lines.

Defensively he was again bypassed too easily in open play, but going forward he was involved in a good move which saw him burst through the middle and into the penalty box—a reminder of his former forte.

Neat and tidy on the ball, but played a largely holding role after the opening 10 minutes when he did surge on once or twice.

Strong in winning back the ball, comfortable in holding forte when Henderson ran beyond and diligent about tracking his man.

A quiet display overall, but he did what was needed in his role.

Alex Oxlade-Chamberlain – 9, Man of the Match

The versatile performer started off wide right but quickly came inside to make it a middle three when Salah dropped wide, making Liverpool tough to break through.

Oxlade-Chamberlain helped win the ball back quickly in midfield, showed great awareness to play into the final third and wasn’t shy about breaking forward from deep.

Almost scored a brilliant and deserved goal after showing his best traits in one combo: a slide tackle, surging run and fierce shot, which smacked back out off the post.

Quickly involved as a conduit for the Reds’ attacking play, just inside or around the edge of the penalty box.

Extremely unlucky not to score a free-kick just 10 minutes in, the woodwork denying him, but it wasn’t long before he made the breakthrough.

A slaloming run saw him evade three or four defenders and slide a low finish inside the near post, showing equal parts technique and ingenuity for the goal.

Coutinho was constantly looking to split Bournemouth‘s defence and clocked up an assist in the second half with a fine, flat cross to Firmino, but there could have been more.

On top of his game in the attacking third, but worked hard defensively too when required.

A decent shout for the Reds’ best performer on the day for many. Playing nominally up front but quick to race into the channel to open space, before cutting inside on his favoured left foot.

Salah filtered over to the right out of possession to help the Reds keep shape and provide an outlet on the break, always being a danger on the counter.

He had a couple of wild sighters with his curled shots across the face of goal, but right before half time he showed great pace and perseverance to beat his man twice and find the bottom corner for 3-0.

That makes it 20 for the season already for Salah, the first Liverpool player to do so before Christmas since Ian Rush in 1986/87 (as reported by Rich Jolly, h/t Ged Rea).

Always a willing runner and vital to the Reds’ attacking play, no matter the situation.

Firmino showed his usual selflessness on more than one occasion to try and tee up others when he could have taken on the shot himself, and his relentless work rate lead to the second goal.

He hooked the ball back over his shoulder from a corner, into the six-yard box when most had given up the chase, allowing Lovren to score from close range.

Firmino netted his own header midway through the second half, flashing one in at the near post to clock up a dozen for the season in all competitions.

Booked immediately for a late tackle and generally looked sluggish—as can be expected given his time on the sidelines—but improved after a few minutes and was involved in some nice passages of play. The boss set the Reds up to attack, but the shifting shape and flexibility down the right in particular leaves Liverpool much better off defensively too.

His rotation across December has been pivotal to maintaining generally good results and performances, and to keeping the attacking options rested.

In-game subs on this occasion were merely to offer minutes and game time, with the result already well wrapped up.