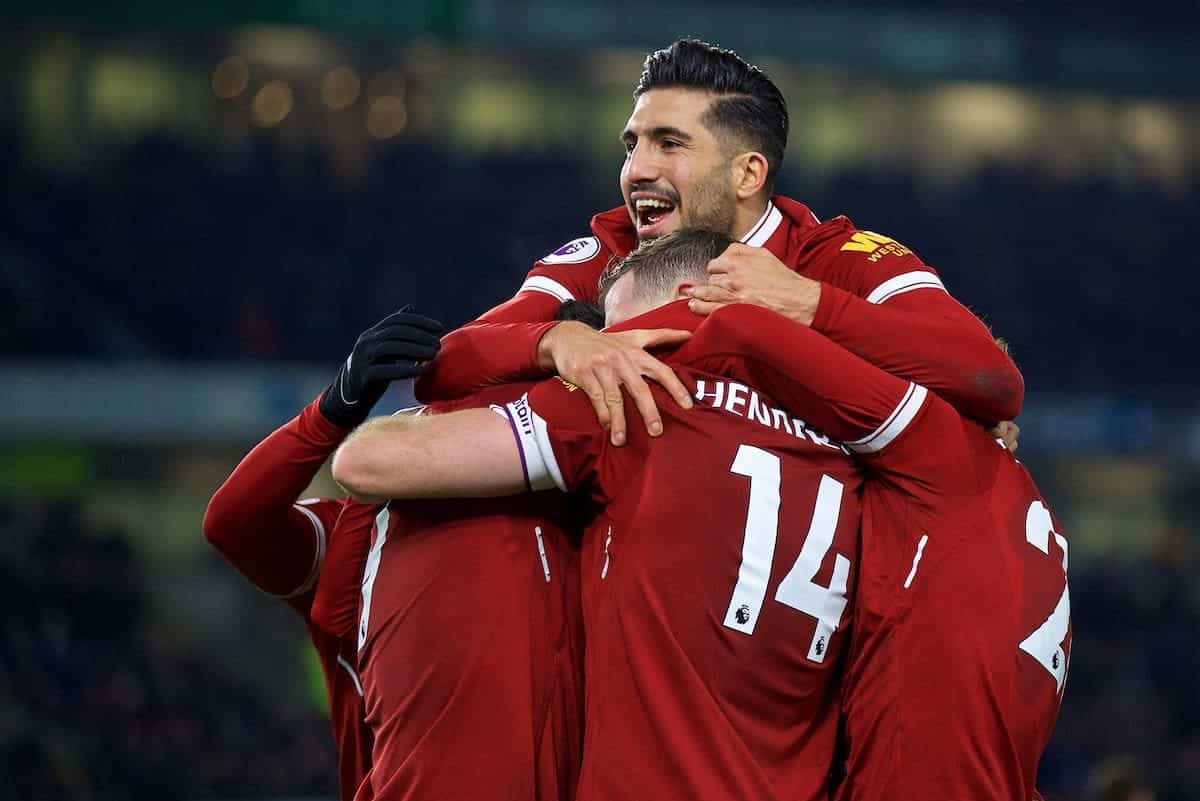 Liverpool cruised to a stunning 5-1 win at Brighton & Hove Albion on Saturday, and it was the Reds’ brilliant Brazilians who stole the show.

It was a comfortable afternoon for Mignolet, who was rarely troubled against a limp Brighton side.

The Belgian didn’t have one save of note to make until the second-half, but it was an excellent one from Glenn Murray, just moments before Roberto Firmino made it 3-0.

His kicking was not good, however.

One superb early cross was nearly met by the head of Roberto Firmino, and he offered constant quality and energy down the flank.

Defensively sound, too, making one exceptional late block to deny Izquierdo with 10 minutes to go. A key moment like Mignolet’s save earlier.

With Joel Matip, Ragnar Klavan and Joe Gomez all missing out, Can was used at right centre-back, and he was a classy presence throughout the afternoon.

He took the ball out from the back with purpose and defended well when called upon, and it was his bullet header that gave Liverpool the lead.

A colossal footballer when he wants to be.

The much-maligned Croatian had a good day at the office, cutting a more assured figure than we are used to, and making a couple of important interceptions.

He will have busier games, but you couldn’t fault him at the Amex Stadium.

Not many would ever have expected to see Wijnaldum playing as a left-sided centre-back, but that’s exactly how Jurgen Klopp used him against Brighton.

The 27-year-old did well in an unfamiliar role, however, helping keep the dangerous Anthony Knockaert quiet and putting off Glenn Murray with a last-ditch tackle with the goal gaping.

A very intelligent player – it’s not a huge surprise to see him display such versatility. Finally, Robertson was given a chance, having started his first game for the Reds since the League Cup defeat at Leicester City on September 19.

The left-back wasn’t as noticeable as Alexander-Arnold, but he was a slick presence, often using the ball intelligently and bringing Alberto Moreno-esque pace to the side.

The skipper returned to the side, and although he did fine, he still looks a long way short of his best.

One hopeful cross into Mathew Ryan’s arms was lacking in invention, and his passing was always rustier than those around him.

Worked his socks off, though, and was far from poor.

This was a typically unspectacular, under-the-radar Milner performance, but one that his teammates will have appreciated greatly.

The midfielder’s industry was a nice foil for Liverpool’s attacking stars, and he did his job in effective fashion.

A really useful squad member who rarely lets you down.

Liverpool’s man-of-the-moment was not at his electrifying best, but he was still a major threat all day long, with his pace frightening the life out of the hosts.

After a rusty start, with a few loose touches proving frustrating, Salah grew into the game, and played a key role in Firmino’s goal. He then teed-up the Brazilian for the Reds’ third goal.

Even when he’s not at his best, he’s good.

At times on Saturday, Coutinho resembled a player mucking about on the beach, such was his effortless brilliance.

The Brazilian provided a lovely first-time assist for Firmino, and some of his touches in tight spaces were a joy to behold.

He then scored two of his own – although the second may be awarded as a Lewis Dunk own goal – including a clever, under-the-wall free-kick.

It was a mesmeric performance – one of Liverpool’s best individual displays of the season.

He should have done much better with an early headed chance, but he made amends soon after, finishing well from close-range to take his 2017/18 goal tally to nine. Didn’t affect the game, but did a solid job.

Klopp made six changes to the side that won 3-0 at Stoke City on Wednesday, and it paid off, as Liverpool won a fifth Premier League match out of six.

His experiment to use both Can and Wijnaldum at the back in a 3-4-3 formation was also a success, and he got an imposing performance out of all of his players.

It has been a really strong response by the manager, since being questioned a little after the 4-1 drubbing at Tottenham in October. He’s a fantastic manager.