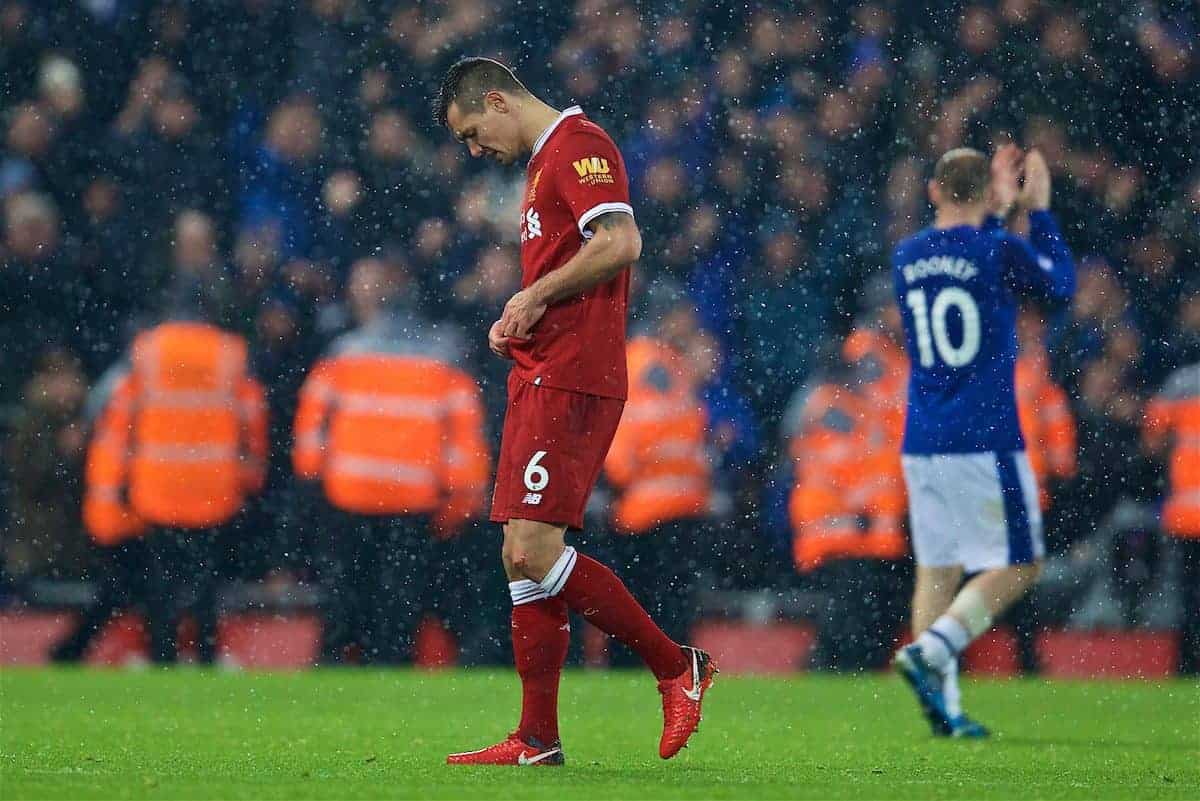 Liverpool threw away a one-goal lead at Anfield after a late penalty goal from Wayne Rooney meant Everton came away 1-1 draw in the Merseyside derby.

The Reds were unable to make their dominance count in one of the most one-sided Merseyside derby clashes in recent years, held to a share of the points.

Mohamed Salah opened the scoring for the hosts, but after controlling the game throughout a foul from the clumsy Dejan Lovren in the penalty area allowed Rooney to equalise from the spot.

Liverpool are now 10 games unbeaten, but the manner of Sunday’s draw will feel more like a defeat for supporters.

Here are all the reactions from throughout the game.

Gomez’s performance earned praise in the first half…

– Solo Pigeon Pack on the forums.

When Salah put the Reds in front, fans were delighted…

Salah again!!! What a goal!! Finally got the break through! Should’ve been 2-0 but sure Màne will make up for it!

“Should be 2-0 up but no damage done. We’re winning with another goal which oozes absolute class from Salah.”

But when Rooney scored, they were livid…

No need for that foul Lovren. Talked a big game this week and then makes a costly mistake, once again.

Here comes 15 minutes of Lovren trying to make up for that penalty, also known as 'Liverpool 1 – 2 Everton (Rooney 88)'

Why give the ref a chance to blow the whistle? Why? He was running away from goal! No goal threat!

Salah's face on the bench again. Tired of watching these idiots concede late

Fans were hugely disappointed at full-time…

Klopp, Mané, and Lovren. That is all.

“What’s done is done. A wasted chance really but derbies are always tricky. A win against West Brom on Wednesday needed to keep the pressure on Chelsea.”

Sat here shaking my head for 15 minutes, wondering how we’ve Dejan’d ourselves to a point, when we should have had all three. Fuck sake

It's 100% on the manager that. Even if Mane squares it, we win in spite of team selection. Shite.

“This was a very average Everton side. So disappointed we didn’t get the full three points.”

– Abu Zaid Masuri on the forums.

Lovren can blame the referee all he wants but for a defender to make needless contact when the striker is running away from goal is just stupid. Asking for trouble.

“Can’t believe how a team that plays no sort of football whatsoever claims a point with 21% possession.”

Everton came here for a point and we gifted it to them. They rode their luck at times but at 1-0 there's always a chance of getting back into the game. Dress it up however you want, this is two dropped points for Liverpool.

“I can’t tell you how angry I am. I’m seriously fed up with these refs. It’s happened too many times this season where the refs made a decision and it’s hurt us badly.”

– Chris on the forums.

Didn't really think that was a penalty but these things can happen. We could have done much better against that massed defence but glad there's another game on Wednesday so we can get it out of the system.