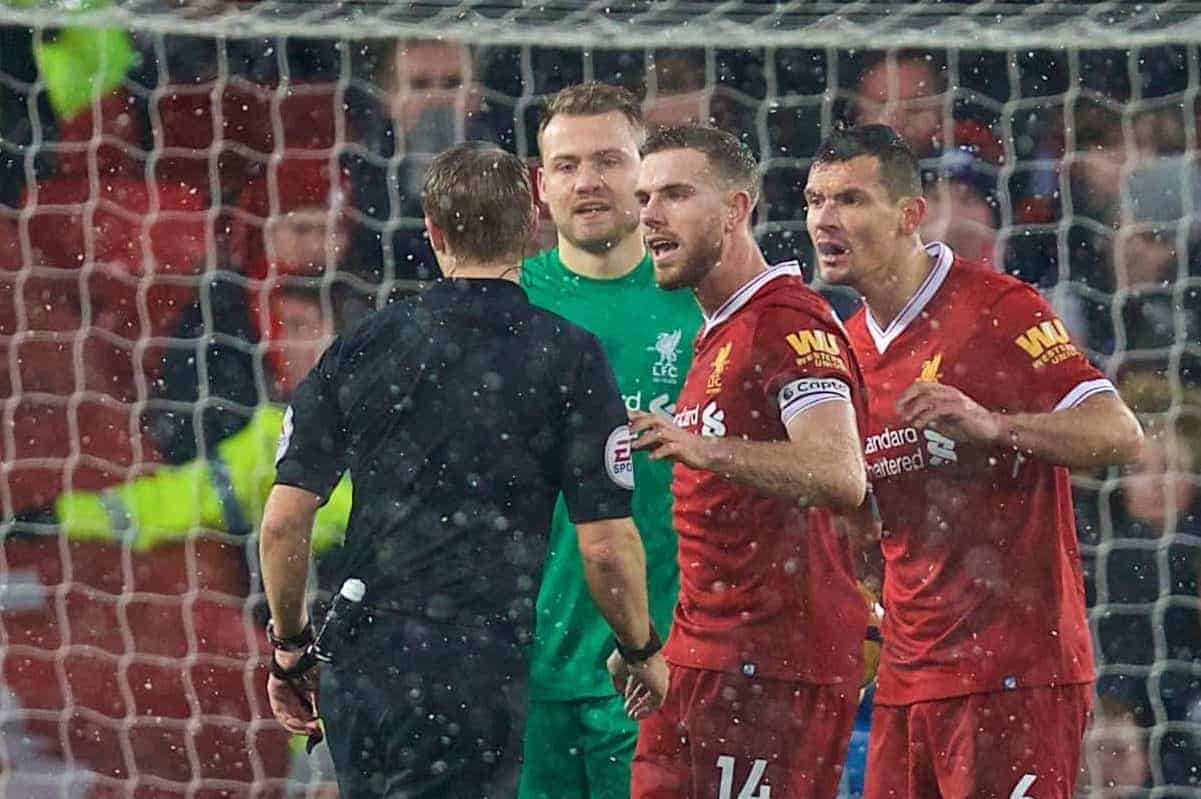 Liverpool could only draw against a defensive Everton side after a late penalty cancelled out another superb goal from Mohamed Salah.

Was a first half spectator, with his only moment of action being to catch a tame shot from Gylfi Sigurdsson.

Will have been glad to get in at half time to warm up and chat to some of his team mates who’d spent much of their time in the opposition half.

Looked like he could have come for a cross which was eventually headed behind by Gomez, but made up for it by clearing the corner and catching the cross which came in shortly after.

Dove as Rooney put his penalty down the middle so can’t be blamed there.

Looks like he could be a big part of Liverpool’s future. Reads the game well and then has the strength and speed to intervene.

Sauntered through the Everton midfield on one occasion, leaving Idrissa Gueye in his wake.

If the other defenders continue to make mistakes then he could get the nod in the middle come the latter half of the season.

Headed over from Salah’s cross in the second half.

Was doing well until conceding a penalty, making interceptions and winning his battles.

Generally looks more comfortable on the right side of defence, but will have been disappointed to fall into Calvert-Lewin’s trap.

The young striker put his body between Lovren and the ball, showing experience beyond his years as the Croatian obliged by giving him a slight nudge which was enough to see the referee point to the spot.

He will feel aggrieved at the decision, and remonstrated with the referee, but the situation could have been avoided had he used a little more nous.

Like Lovren he had the edge over the Everton strikers for much of the game, and was pro-active when it came to stopping attacks.

Did well in the physical battles and was strong against the tricky Calvert-Lewin. Settled into the game well, cutting inside as well as overlapping, but the final pass isn’t quite there yet which sometimes isn’t his fault.

Gave Milner an option which the Englishman didn’t always use, but helped stretch the play down the left.

His presence in the side means that Liverpool shouldn’t miss the resurgent Alberto Moreno, and if he finds a more consistent final ball he could rack up the assists.

Motioned angrily to Lovren at one point, which summed up his own failings rather than his centre back’s.

Rather than making the difficult pass forward which midfielders in his role may be expected to he would rather offload the easy pass to a centre back.

Heavily involved, connected with quite a few of his trademark long balls, but was the only midfielder to finish the game with no key passes.

Slightly better than Henderson but still lacked any creative spark. Can put a decent cross in, though, and sent a ball in from which Salah should have scored his second.

Had a good volleyed effort blocked in the first half, but shot wide in the second.

Settled well into midfield, operating in a role similar to that which Lallana performs when he’s in the side. The difference being that he brings more pace and dynamism to it.

Regularly looked to get into the box, and saw a good dinked cross headed desperately behind for a corner in the second half.

An encouraging display and the best of the three midfielders.

Scored an outstanding goal which looked like it would give his side the derby victory.

Cut inside from the right, beating Cuco Martina and Gueye before finding the far corner.

Should have had a second from Milner’s cross but headed back across goal and wide.

Struggled to hold the ball up, but was given a difficult task in the middle against the compact Everton defence.

Grew into the game, and set Mane free with a neat touch.

Was a constant threat, running in front of an in behind the opposition defence when the opportunity arose.

Should have engineered a goal when through one-on-one, but he dragged a left footed shot wide when he could have passed to players in support.

Saw an acrobatic overhead kick saved in the second half, and looked to run out of gas as the game went on.

Gave ball away with a backheel Everton broke for penalty.

Struggled to get into the game on his introduction. Added hard work but couldn’t add the cutting edge his side required from the bench.

Philipp Coutinho (on for Oxlade-Chamberlain, 78′) – N/A

Made six changes which largely worked, but his side struggled to break down Everton‘s defensive block – which would likely have been the case regardless of personnel.

His midfield lacked creativity though, choosing both Henderson and Milner when one of the other players at his disposal.

The rest of his side, the front three and Oxlade-Chamberlain worked well, and they only didn’t win the game due to a single Lovren defensive error.