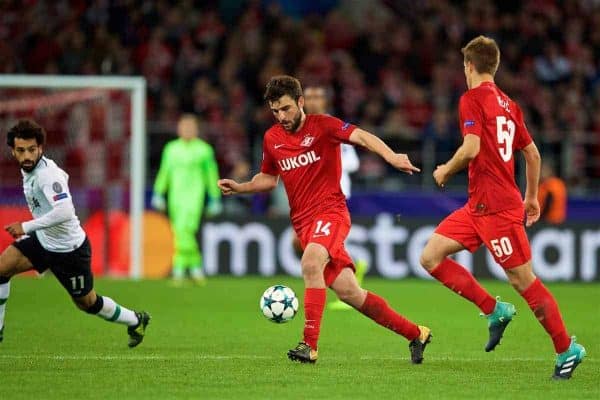 Liverpool will take on a Spartak Moscow side buoyed by a strong run of form and a band of key performers in the Champions League on Wednesday.

The Reds were held to a 1-1 draw by the Russian champions in their last meeting in Group E back in September, with Philippe Coutinho‘s goal cancelling out Fernando’s opener.

Since then, Spartak have endured mixed fortunes in Europe, sealing a convincing 5-1 win at home to Sevilla, but then losing in the reverse fixture before being held to a 1-1 draw by Maribor.

Massimo Carrera’s side need a win in midweek to boost their hopes of progressing to the last 16, while Liverpool will be looking for at least a draw.

And the home side could be in for an even more difficult challenge than in their previous clash with Spartak, who will arrive on Merseyside in confident spirits.

Since their 2-1 defeat in Seville at the start of November, Spartak have not lost in their last five games, winning all four of their outings in the Russian top flight.

These included convincing victories over FC Ufa (3-1), Krasnodar (4-1) and Zenit St Petersburg (3-1), while most recently Denis Glushakov struck in the 90th minute to win 1-0 at Arsenal Tula.

Even their stalemate at home to Maribor was unfortunate, much like Liverpool’s 3-3 draw with Sevilla, with the Slovenian side equalising in stoppage time.

Spartak are lifted by one particular key name who was unavailable at the Otkrytie Arena two months ago, in the shape of ex-Liverpool target Quincy Promes.

Promes was long touted with a move to join Klopp’s side, but the arrivals of Mohamed Salah and Alex Oxlade-Chamberlain have seemingly ended the German’s interest.

The Dutchman was out with a hamstring injury back in September, but since his return has scored four and assisted five in 10 games in all competitions.

This included a brace and a pair of assists in the 5-1 win over Sevilla, underlying Promes’ Champions League pedigree, while crucially, he was also rested for the win over Arsenal Tula on Friday.

Promes has scored 13 and assisted eight in 23 games so far this season.

The Reds will also be wary of the threat of a player who, while quiet in their last meeting, has struck a rich vein of form of late.

Luiz Adriano, formerly of Shakhtar Donetsk and AC Milan, has scored four and assisted two in Spartak’s last five games, and will be a major threat to Liverpool’s shaky defence.

However, left-back Dmitri Kombarov is out with a broken rib, while Georgi Tigiev (ACL), Artem Timofeev (ACL) and Jano Ananidze (ankle) are also unavailable.