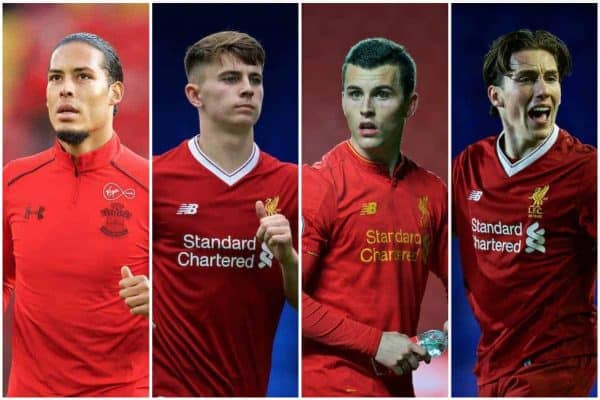 Ahead of the January transfer window, we round up the latest from the rumour mill at Anfield, including one departure and two possible loan exits.

The Reds are set for three more outings before the end of the year, travelling to take on Arsenal on Friday night before home clashes with Swansea City and Leicester City.

Jurgen Klopp will be hoping to see his side firmly positioned in the Premier League‘s top four as they head into 2018, with his revolution moving forward.

Either way, the German requires further additions to his squad if they are to continue their progress, and it could be that signings are made in January.

By the same token, it is likely that next month will see a host of players leave, either on permanent deals or on loan.

Here’s the latest Liverpool transfer talk, as one academy youngster heads to America.

Liverpool failed in their efforts to sign Southampton centre-back Virgil van Dijk in the summer, and they have suffered in defence as a result.

With Joel Matip sidelined through injury and Joe Gomez deputising at right-back, Klopp has called upon Dejan Lovren and Ragnar Klavan as his regular duo of late.

Meanwhile, Van Dijk’s efforts to force through a move to Merseyside in August seem to have had an impact on his form with the Saints, as Jamie Carragher discussed on Sky Sports on Monday.

“We are talking about a player who I think Southampton should sell because it hasn’t worked keeping him,” he said.

“The results haven’t been great and Southampton look like they need reinforcements on the pitch.

“So if they bring £50, £60 million, whatever it may be, back into the club, I think it’s going to help the team because at this moment he’s not.”

While it remains purely speculative at this stage, Saints manager Mauricio Pellegrino reiterated on Sunday that he “can’t control the market,” hinting that Van Dijk could be sold.

According to BBC Sport, Atletico claim Barcelona “[have] spoken to people around Griezmann, including family members,” which breaches FIFA regulations.

While it remains to be seen how this will pan out, or the potential ramifications, given their previous offences it could be that Barcelona receive another transfer ban.

And as they are expected to renew their interest in Philippe Coutinho, either in January or next summer, the Brazilian could therefore be forced to remain at Liverpool.

Could Barcelona have shot themselves in the foot again, after their tumultuous summer?

The success of Liverpool’s attacking trident of Sadio Mane, Mohamed Salah and Roberto Firmino has been the undeniable, overriding positive of the season so far.

But it could have been much different, had the Reds secured the signing of Brazilian winger Alex Teixeira from Shakhtar Donetsk at the start of 2016.

Both Mane and Salah have been signed since Liverpool’s failure to broker a deal with Shakhtar, and have shone, while Teixiera has endured a troubled spell with Jiangsu Suning.

And according to Italian outlet Tuttosport, Jiangsu are now willing to allow the 27-year-old to leave on loan.

Inter Milan are mooted as a likely destination, but it could be that Klopp is tempted by a cut-price deal to sign his former target.

Another player previously linked with the Reds, Lazio midfielder Sergei Milinkovic-Savic, has seemingly returned to the radar.

According to Serbian publication Sportski Zurnal, Liverpool were among the clubs to scout Milinkovic-Savic as he scored two goals in Sunday’s 3-3 draw away to Atalanta.

Interestingly, ex-Liverpool midfielder Luis Alberto scored a late equaliser for Lazio, with the Spaniard hitting fine form since leaving for Rome in 2016.

Woodburn ‘Made Available’ For January Loan

After making his breakthrough under Klopp last term, Ben Woodburn has barely featured for the Liverpool first team so far this season.

The teenager has played just 44 minutes in the League Cup, instead regularly turning out for the Reds’ U23s and U19s, continuing his development at academy level.

Given he is just 18, this is far from a disastrous situation, but Woodburn is clearly a player capable of performing on the senior stage already.

And according to the Mail, Klopp is set to sanction a temporary move for the Wales international next month.

Huddersfield Town and Leeds United are mooted as possible destinations, while Hannover 96 could revive their interest from the summer.

However, the Championship is said to be his “likeliest destination,” providing him with much-needed game time at a competitive level.

Wilson ‘On Preston’s Radar’ Ahead of Loan Switch

Harry Wilson has found himself in a difficult position at Liverpool in recent seasons: dominant for the U23s, but rarely considered for a first-team berth.

The winger hasn’t played for Klopp’s side since making his debut as a substitute in the 1-0 win away to Plymouth Argyle in the FA Cup last season, and runs the risk of stagnating.

After U23 manager Neil Critchley hinted at a January loan for the 20-year-old earlier this season, it now seems likely he will move on.

And the Lancashire Post claim that Preston North End are interested in a possible deal for the Welshman, though “the club also have other options.”

Wilson needs a challenge in order to establish himself as a first-team talent, either at Liverpool or elsewhere, and joining Alex Neil’s side would be a welcome move.

After joining Liverpool from Real Salt Lake City in 2015, Brooks Lennon spent a year-and-a-half spell with the Reds’ academy, becoming a staple for the U23s.

But while the 20-year-old showed signs of promise as he settled into life on Merseyside, he eventually left to rejoin the MLS side on loan in February.

Lennon scored three goals and laid on two assists in 26 appearances for his Real Salt Lake in 2017, making 15 starts in MLS.

That was seemingly enough to convince them to negotiate a permanent deal, and according to the league’s official website, he has completed a free transfer.

This is yet to be confirmed by either club, however, but given Lennon’s contract with Liverpool was set to expire next summer it is highly likely.