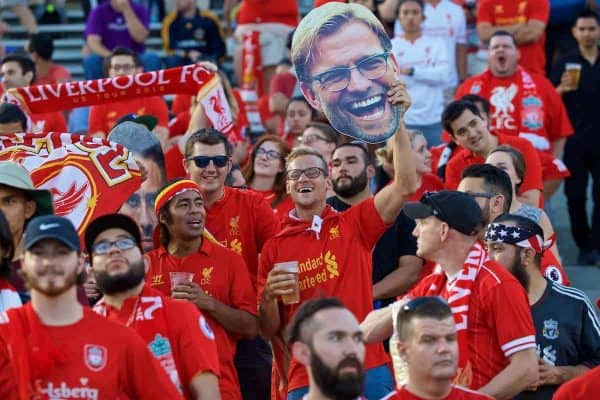 Life as a US Red: How You’ll Never Walk Alone can stretch from Liverpool to America

After making his first trip to Anfield from America, Will Snyder pinpoints what makes Liverpool such an appealing club for overseas supporters.

First, let me confess: I am an American. An American born and living in America, to be precise.

I grew up surrounded by American sports: baseball was the most popular sport then, and ‘football’ involved helmeted giants feigning interest in an oblong ball while actually trying to harm one another.

I tell you this now so that you are not under any illusions. Unlike somebody born on Anfield Road, I had to choose to support Liverpool Football Club.

The easier path would have been to choose an American team and an American sport. Or a team in a place easier to visit!

But, like you, I fell in love with football and Liverpool.

After I attending my first Liverpool game at Anfield, the 4-3 victory over Man City, I understand that I am not alone in making that choice.

In the era of the charisma-oozing Klopp and a free-wheeling front three capable of scoring at any second, more supporters are coming on board every day.

It got me thinking: why have we all pledged to never walk alone?

How Does One Choose Whom to Support?

I have asked myself that question many times since returning home from Anfield.

For some people, there is little choice in deciding whom to support. You are a fan of the team that plays in the area where you grew up. No conscious choice needed.

But for me, born in a small American town to parents of muddled European descent, there was no local football team for me to cheer for. In fact, when I was growing up few Americans gave a whit about football one way or another.

Nor do I have family from Liverpool. To my knowledge, no one in my family has even traveled to or from Liverpool. Until I arrived to Liverpool the day before the City game, the same was true of me.

Instead, as does any person not from the place of the team he supports, I made a choice. And I have chosen every day since that day to stay loyal to that choice.

From the beginning, Liverpool Football Club resonated with me.

If I’m honest, part of it was that Liverpool were absolutely dominant when I came on board, winning trophy after trophy. Surely that played some part in my obsession.

And, as players like Owen, Torres, Alonso, Mascherano and Suarez left Liverpool for perceived greener pastures, I suffered the same sense of betrayal as those born and bred in Liverpool. But a Red I remained.

Having met fans from Sweden, the United States and China at Anfield, to name just a few, I know many of you have made a similar choice.

So, what is it about Liverpool then?

For me, it is not the trophies. Frankly, Liverpool’s trophy case is unimportant.

Where I lived as a child, 4,312 miles away from Anfield, there were no opposing fans to remind me of Liverpool’s drought; no media tracked how long it had been since last Liverpool topped the table or lifted a cup.

Those things simply didn’t matter to me. After all, what role did I, an American fan, ever have in that?

Nor did regional rivalries have the same force with me as with the locals born to Liverpool.

Being a supporter, for me, is about more than just winning games. If I had to choose between Liverpool winning a title after a season of Mourinho-esque 1-0 wins or a season like 2013/14 with our swashbuckling attack and pantomime defence, the decision wouldn’t be that difficult.

Give me the season of excitement and stunning football, high drama, individual brilliance and teamwork over a season of stunted victories and football without entertainment.

Sure, winning games, particularly against teams like City in the way Liverpool won, is wonderful.

But, 4,312 miles away from Anfield, winning is not enough. No longer a child happy to root for a league medal, I find infinitely more happiness in collecting discrete memories of feeling.

Emotional moments, like sweet treasures collected, hidden and every once in a while savoured, are what endure.

These are what will always remain; instants that make me feel connected, united, conjoined, if only for a moment, regardless of the final scoreline.

In watching Liverpool, I become part of some greater whole—and somehow, I become whole myself.

From the spasmodic seizure of a gegenpress to the synchronised power of the Kop’s voice, urging players to strive, to fight, to be better, I see myself in those players, those instants.

Yet, it is not just me. It is all of us Liverpool fans, across the world, together.

If only for the briefest of moments and in the most unconscious way, hammering my heart strings with the force of a Gerrard screamer and plucking my imagination with the majesty of a Firmino floated finish, I am not alone.

That’s why I support Liverpool. How about you?