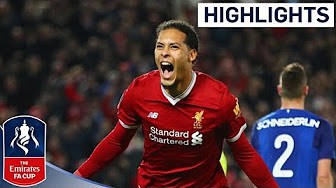 Watch the full highlights and all the goals as Liverpool saw off Everton at Anfield in the FA Cup third round on Friday night.

Virgil van Dijk enjoyed a dream debut for Liverpool by heading the winner in front of the Kop in the 230th Merseyside derby as they knocked Everton out of the FA Cup.

On a feisty night under the Anfield lights, the world’s most expensive defender proved he can be effective at both ends of the pitch by nodding in an 84th-minute corner to make it 2-1.

The Holland international becomes the first player to score a winner at Anfield in an FA Cup tie against Everton, at the fifth time of asking.

Gylfi Sigurdsson’s 67th-minute goal had earlier cancelled out James Milner‘s first-half penalty in a blood-and-thunder contest which threatened to be tainted by a first-half flare-up between Mason Holgate, who conceded the spot-kick, and Roberto Firmino.

The Toffees defender shoved his opponent into the front row of the Main Stand, provoking an angry reaction from the Brazilian, a melee and the two protagonists exchanging angry words which left Holgate apoplectic.

However, referee Bobby Madley, despite being in the thick of it, chose to take no action against either player.

It may have all been a misunderstanding but it provided extra motivation for the visitors, with a markedly improved performance after the interval as even Liverpool’s new £75million signing could not help them keep a clean sheet.

However, he repaid them in fine style to spark wild celebrations at his new home.

The atmosphere seemed to crackle at kick-off and the early stages suggested this was an old-fashioned derby, with tackles flying in – mostly from the visitors – and Wayne Rooney booked after just seven minutes.

Aside from a James Milner volley flying across goal and wide there was very little in way of actual goal threat until Adam Lallana turned Holgate and the young defender stuck out an arm to impede the Liverpool midfielder.

In the same area where Everton‘s Dominic Calvert-Lewin won a controversial penalty in last month’s 1-1 draw after Dejan Lovren laid a hand on him, referee Madley had no hesitation in pointing to the spot and Milner fired straight down the middle.

Holgate’s head was scrambled and five minutes later, after losing possession, he shoved Firmino into the front row of the Main Stand.

The Brazil international charged back at the defender and angry words were exchanged between the two.

However, Madley was between the two players and took no action against either. Early in the second half Gomez headed wide a corner, Lallana poked a shot just past the post when presented with a clean run on goal and Andrew Robertson and Van Dijk were denied by Jordan Pickford as Liverpool threatened to overrun the visitors, who replaced a pumped-up Rooney with Ademola Lookman soon after the restart.

Just like a month ago, Liverpool were made to pay for missing chances as an improving Everton launched a counter-attack from a corner which ended with Phil Jagielka teeing up Sigurdsson to place a shot past a static Loris Karius.

Van Dijk had the final word, however, to give manager Jurgen Klopp his first FA Cup win at the fifth time of asking – also setting a new unwanted record for Everton, who have now gone 16 derbies without a win.