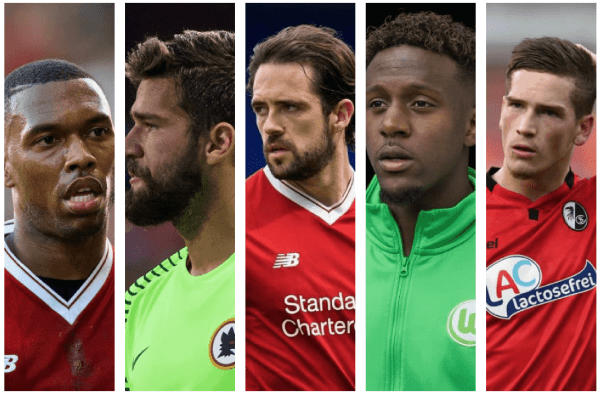 Reds in for Alisson, Sturridge to leave and Ings to stay – Liverpool FC Transfer Rumour Roundup

Already the Reds have had one big transfer in and another one out, but there could be more ahead judging by Monday’s rumours.

Virgil van Dijk and Philippe Coutinho were both mooted for summer moves; one to Liverpool, one away from Anfield.

Neither came to pass—but in January they’ve bypassed each other in the revolving Melwood door. They might not be the last, either.

Monday’s news has seen speculation about no less than three Reds forwards potentially on the move, including Daniel Sturridge.

There’s also news over a new goalkeeper, young players and possible loan deals to line up in the coming weeks.

Here’s all the latest on which transfers Liverpool might follow up Coutinho’s exit with, as well as the fallout from that particular deal.

Coutinho’s move to Barcelona might be wrapped up, but the fallout from the transfer continues.

It emerged on Monday that the Reds tried a last-ditch attempt to seal a return for the Brazilian for the rest of the season, on loan, as part of the move.

Later it was claimed by a Barca director that the asking price for Coutinho had been significantly reduced from the summer.

Neither seem to have worked out in Liverpool’s favour, though the terms of the “substantial” drop in fee is far from confirmed or clear.

Sturridge to leave but Klopp wants to keep Ings

Liverpool may well be set to lose out on a further supply of goals, with news that Daniel Sturridge is set to depart.

However, ESPN report that while Sturridge will leave Anfield this month, Jurgen Klopp wants to keep Danny Ings.

That’s in contrast to earlier reports, which had suggested there was a market to offload both players, on loan or permanently.

Neither have been regulars under Klopp this season, with Sturridge out injured again recently and Ings only occasionally featuring on the bench.

Dominic Solanke is ahead of both at present as Roberto Firmino‘s understudy, but it begs the question of whether there’d be a forward signed in place if either striker left in January.

According to the report, Sturridge could well be sold outright, but Ings has done enough of late to convince Klopp he has a role to play.

Origi open to move away from Anfield

Another striker who could be on the move is Divock Origi, already in a loan spell away from the Reds this term.

The Belgian forward is with Wolfsburg in the Bundesliga for the year, but is open to a permanent move away according to ESPN.

“I focus on the here and now. I have a good relationship with Liverpool, but feel really well here at Wolfsburg.

“We’ll sit down at the end of the season, and talk we’ll see what’s next. Right now, I am here for another six months, and I am open for everything.”

The forward has netted four goals so far this season.

Reds in for goalkeeper Alisson

A tenuous link so far, but one which might interest some sections of the Liverpool fanbase.

AS Roma’s No. 1 goalkeeper Alisson is next on the club’s hit-list, according to Brazilian journalist Gustavo Fogaca Guffo.

Via on his Twitter account, the journalist suggested that after confirming Riyad Mahrez, the Reds would be moving for Brazil’s first-choice stopper.

Of course, any move for Mahrez is also much-debated, with several sources saying no such move is in the offing.

Brannagan on verge of move away

Several of Liverpool’s youngsters are trying to secure first-team football for the next few months and beyond, and one which seems close to a move is Cameron Brannagan.

Seemingly on the verge of the first team only 18 months or so ago, he has disappeared entirely from the first-team scene.

The Independent report that he is instead set for a move to Oxford United.

Brannagan has played nine times for the Reds.

Further down the league ladder, Liverpool and Arsenal scouts were reportedly in attendance to watch 18-year-old defender Ben Wilmot.

The Mail report interest from Premier League clubs in the Stevenage teenager, who has been compared by his manager to Alfie Mawson.

Wilmot was making his first senior start for Stevenage in the FA Cup against Reading.

Kent back from Germany—and ready to leave again

Ryan Kent has had his loan to Freiburg cut short, with the winger back in training at Melwood over Christmas.

He might not be around for long though, despite having received clearance to play for the Reds again after his move was cancelled.

The Echo report he’s far from short of offers for another loan spell for the second half of 17/18.

Kent is likely to head to another Championship club after excelling for Barnsley there last term.

He played just six times for Freiburg during his stint in the Bundesliga.