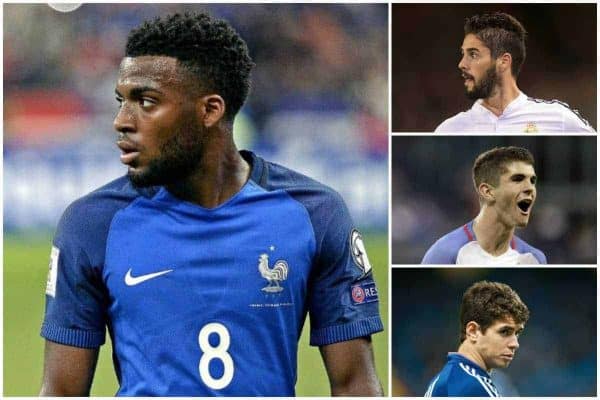 Liverpool have reportedly dropped Monaco midfielder Thomas Lemar from their list of summer targets, so which alternatives should they consider?

According to the Liverpool Echo, the Reds have “cooled their interest” in the France international, who was the subject of a big-money bid from Anfield last summer.

This is a curveball given Jurgen Klopp was widely expected to return for Lemar ahead of next season, but given Monaco’s price tag and his shaky form this term it may be a wise decision.

With four months until the summer transfer window opens, this sets up a period of speculation over Klopp’s preferred candidate—be that a left winger, a No. 8 or a mixture of the two.

So who could Liverpool target as an alternative to Lemar in the long-term pursuit of a Philippe Coutinho replacement?

Dortmund signed Pulisic when Klopp was in his final months as manager, but the American teenager clearly caught his eye in such a short space of time.

He wasn’t promoted to the first-team setup until Klopp had departed, but since then Pulisic has gone from strength to strength, at times serving as Dortmund’s biggest attacking hope.

This season he has scored just four goals in 26 games, assisting twice, but his performances have remained hugely impressive, as he continues to develop from enthusiastic youth to mature, top-level forward.

Pulisic is at his best operating as a winger, and can take up duties on either flank, with a possible transition into a No. 10 role not on the cards at this stage.

Whether he could be prised from Dortmund in the summer is questionable, but he recently described the Premier League as an “unbelievable league,” adding that “you never know” regarding a move.

Lemar’s arrival would have gone some length to replacing the dribbling ability, creativity and long-range goal threat Coutinho provided.

With Liverpool seemingly priced out of a move for the 22-year-old, however, another option as a regular danger man in the final third could be Lyon captain Fekir.

After recovering from a long-term ACL injury in 2016, Fekir has scored 33 and assisted 17 in 77 appearances from the Ligue 1 outfit, typically operating as an attacking midfielder.

He is versatile enough to suit Klopp’s fluid system, and though it may require a shift in his approach he could shine alongside Sadio Mane, Mohamed Salah and Roberto Firmino.

Speaking to Onze Mondial at the start of February, Fekir acknowledged speculation of a winter switch to Merseyside, and while he insisted “there was never anything concrete” he later added that “we’ll see what the future holds.”

The prospect of a top-level talent like Isco being surplus to requirements is a bemusing, but according to Spanish publication AS, Real manager Zinedine Zidane is looking to sell.

Since joining Real from Malaga in 2013, the attacking midfielder has struggled to impose himself on a regular basis, but there is no doubting his talent.

A nimble, fleet-footed creator able to craft a moment of magic out of nothing, Isco possesses a star quality Liverpool lost when Coutinho made the move to Barcelona.

His ability to perform on either wing, as a No. 10 or even a deeper-lying midfielder would allow Isco to slot into Klopp’s system comfortably, and his reading of the game and off-ball intelligence would give the Reds a much-needed cutting edge.

Though it remains unlikely, leaving the Bernabeu in the summer to take up the role of a bigger fish at Anfield could provide Isco with the boost he needs.

Then-Bordeaux manager Jocelyn Gourvennec hinted at the Reds’ interest in Brazilian winger Malcom during the January window, saying “if Liverpool want you to work for them tomorrow, you’d go.”

Though Gourvennec has since departed, and widely touted moves to Arsenal and Tottenham failed to materialise, Malcom remains an interesting target.

This season the 20-year-old has almost exclusively operated as a right winger, but as a youngster with Corinthians and in his first season with Bordeaux he also turned out on the left.

A natural left-footer, Malcom has developed from a more orthodox wide option to a more well-rounded attacker now able to thrive in central areas, too.

With Mane and Salah already established as Liverpool’s first-choice wingers, the addition of Malcom would allow Klopp to rotate, as well as providing an interesting project as future No. 10.

Oscar was roundly criticised for opting to leave Chelsea for the lucrative climes of the Chinese Super League at just 25 in 2016, but the midfielder has been open about his motives.

“I was thinking more of my family than of my career,” he explained last year, with a reported wage upwards of £350,000 a week too difficult to turn down for a player who “didn’t have anything” growing up.

But with the midfielder still only 26, he has admitted he “could go back to a big team in Europe” in the future, and this is where Liverpool could come in provided the right deal can be struck.

The Brazilian has lost none of his ability in Shanghai: he is a hardworking, elusive No. 10 able to drive at defences on the ball and craft openings with his impressive vision.

Under Klopp, he could turn out in the midfield role previously reserved for Coutinho, and alongside the incoming Naby Keita he would provide Liverpool with a key blend of industry and flair.

Moving further into the midfield territory, another player currently touted with a move to Liverpool is Hoffenheim’s Demirbay.

A Dortmund youth product, Demirbay played for David Wagner’s reserve side in 2012/13 before moving to Hamburger SV and eventually settling at the Rhein-Neckar-Arena.

Something of a late bloomer, the 24-year-old is now establishing himself as a leading talent in the Bundesliga, with his agility, tenacity and technical quality ensuring a key role.

He is also now a Germany international, and scored in his only appearance in last summer’s Confederations Cup success, a 3-1 victory over Cameroon, to highlight his cutting edge.

Interestingly, Demirbay is reported to have a release clause of just £28 million in his current contract which becomes active in the summer, providing Liverpool with a potential bargain for the No. 8 role.

Finally, shifting away from diminutive creative options, Lazio powerhouse Milinkovic-Savic would be an exceptional option for Liverpool.

Like Oscar and Demirbay, he could take up a midfield role alongside Keita next season, and while he would provided similar qualities in terms of creativity and goals, this comes with an added physicality.

Milinkovic-Savic is a 6’4″ midfielder at his best in a box-to-box role, driving from deep to link play and provide an additional threat on the edge of the penalty area.

This season so far, the 22-year-old has scored nine goals and laid on a further six in 29 appearances for Lazio, with ex-Reds duo Lucas Leiva and Luis Alberto providing him with the freedom he requires to shine.

The Serbian would not come cheap, with a reported £88.2 million price tag, but he would be the Rolls Royce talent Liverpool need if Emre Can departs for Juventus as expected.