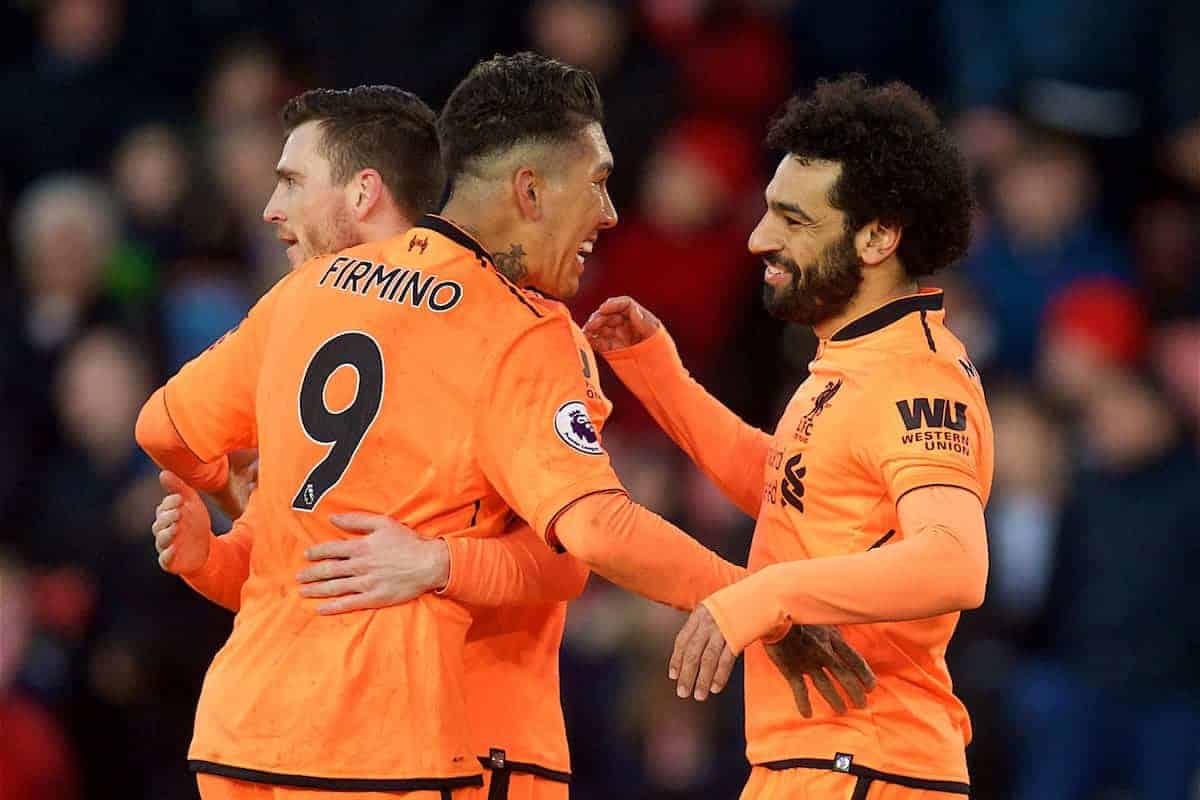 Roberto Firmino and Mohamed Salah will determine whether Liverpool succeed in progressing in the Champions League and securing another top-four finish, Andrew Robertson believes.

They excelled during Sunday’s 2-0 victory at Southampton when an assist from Salah led to Firmino scoring his 20th goal of the season; the Brazilian then produced the classiest of backheels to play in Salah to secure his 29th.

Their increasing importance to Liverpool’s ambitions also comes following Philippe Coutinho’s departure to Barcelona and with them resuming their European campaign against Porto on Wednesday at a time when concerns about their defending persist and Sadio Mane is struggling for his finest form.

That they are so convincing in the final third is particularly crucial when Liverpool remain vulnerable in defence, regardless of the arrival of £75million defender Virgil van Dijk. Asked if they are therefore the ones who will make the difference in them achieving their ambitions, Robertson responded: “Of course. Mo’s come in and got 22 (league) goals. Bobby’s got his 20th.

“They’re the ones putting us in front. From game to game it’ll always change, but yeah, they’re the ones who are getting the chances, and luckily they’re taking them just now.

“They do some sensational stuff in training, but you’ve seen the best of them out on the pitch. They’re doing it week-in, week-out, and when one of them is struggling, the other one pops up, or the other two pop up.

“Loris (Karius) made some great saves that kept us going, and he was a big help. Everyone can make a difference.

“We’ve got two big aims, now that we’re out of the FA Cup, which is a disappointment, but we’ve got these two big aims to go for until the end of the season and that’s what will drive us forward. “We’ve got a wee bit of momentum going again and we need to keep that going until the end of the season, because nothing’s achieved at this point.”

While victory took Liverpool up to third, it also left Southampton in 18th and placed their manager Mauricio Pellegrino under renewed pressure.

The club’s supporters again chanted at him “You don’t know what you’re doing”, but asked if he retains the confidence of his players, Southampton midfielder Oriol Romeu responded: “Yes. It’s not the manager’s problem: we’re the ones playing, and the ones that have to change this.

“It’s conceding many things to the opponent, and when we’re playing away, maybe we’re not defending well enough. We’ve conceded too many easy goals. We need to know how to close the games, how to play under pressure.