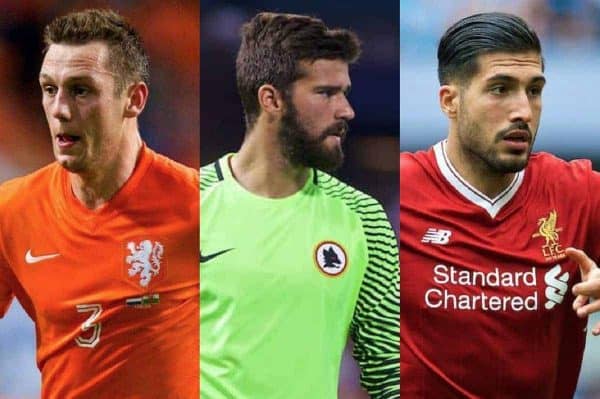 We bring you the latest Liverpool FC news and rumours on Wednesday, including a potential four-way tussle for a bargain defensive signing.

Lazio’s announcement that Stefan de Vrij will leave the club on a free transfer this summer has been met with mass speculation over the Dutchman’s future.

De Vrij, a 33-cap international, will be one of the most hotly coveted Bosman signings of the year, and unsurprisingly Liverpool have been linked with a move.

According to the Mirror, they will vie with Man United, Everton and Arsenal for the 26-year-old’s signature.

However, it is claimed that De Vrij “is understood to fancy Old Trafford,” with Jose Mourinho poised to overhaul his defence at the end of the season.

De Vrij is arguably a better option than both Joel Matip and Dejan Lovren, though, and Jurgen Klopp would be wise to prompt an approach for a potential new partner for Virgil van Dijk.

Liverpool’s interest in AS Roma goalkeeper Alisson has reportedly cooled, with Klopp now expected to keep his faith in Loris Karius as long-term No. 1.

However, there is no guarantee his decision won’t waver between now and June, and the Brazil international is one of the best options if Klopp does opt to pursue a new first choice.

And according to Sky Italy‘s Augusto De Bartolo, Roma could be “forced to sell” the 25-year-old due to impending Financial Fair Play restrictions.

This would come if Roma fail to qualify for next season’s Champions League, and though they are currently in the last 16 they are unlikely to go the distance this term, and face a fight for a top-four finish in Serie A.

It could be that, if Roma were to miss out, Liverpool reconsider their options ahead of another raid on the Italian outfit.

Can Delaying Decision Over Next Club

By now, it is widely expected Emre Can will leave Liverpool on the expiry of his contract on July 1, with Juventus his most likely destination.

However no final decision has been made at this stage, with Can still committed to the Reds’ cause for the time being.

Italian publication Tuttosport have claimed that Can won’t announce his future plans until next month at the earliest, while he rightly focuses on his current club.

They also name Man City, Bayern Munich and Real Madrid as possible rivals for Juventus, though it is highly debatable he would enjoy regular game time with any of the three.

Soon-to-be Liverpool midfielder Naby Keita limped off the field just after the hour mark in RB Leipzig’s 2-1 defeat to Eintracht Frankfurt on Monday night, sparking fears of a long-term absence.

Though the extent of his injury remains “unclear,” Leipzig have now confirmed Keita has suffered “a strain in his right thigh.”

This is far from the most severe problem, and the hope will be Keita doesn’t miss too much action between now and the end of the campaign.

Though there are still four months until the summer transfer window opens, Liverpool are likely making progress behind the scenes in securing their priority signings early.

According to Turkish Football, Reds scouts were present during Besiktas’ 5-0 defeat to Bayern Munich in the Champions League last 16 on Tuesday night, with Anderson Talisca in their sights.

Talisca has already been linked with a move to Merseyside, and it could be that Klopp is keeping tabs on the Brazilian attacking midfielder’s progress ahead of a possible bid.

Finally, one ex-Red looks to be making his way back to the Premier League, with Diego Cavalieri in talks with Crystal Palace over a free transfer.

ESPN FC report that Cavalieri could be brought in as cover for Wayne Hennessey, having impressed Roy Hodgson in training over the past week.

Cavalieri made 10 appearances for Liverpool between 2008 and 2010, struggling to displace Pepe Reina as Rafa Benitez’s first-choice stopper.

He went on to establish himself as a key figure for Fluminense, however, making 229 appearances for the club, winning the Brasileiro Serie A in 2012.