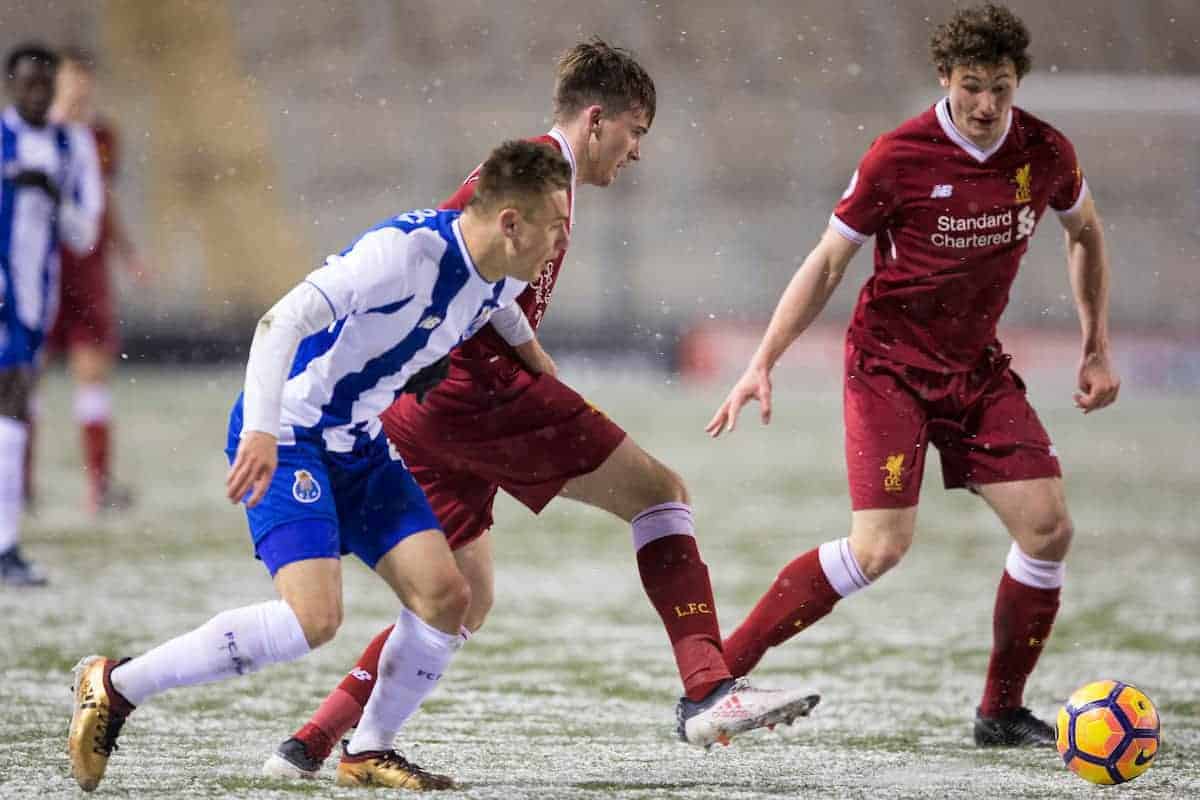 Liverpool took on Porto in the quarter-finals of the Premier League International Cup in a game which was only decided in the dying seconds.

The fixture was moved from Prenton Park to Leigh Sports Village due to the condition of the pitch in frozen Birkenhead, but the snow began to float down in Greater Manchester where Liverpool faced a skilful Portuguese side.

Curtis Jones and Rafael Camacho trained at Melwood with the first team so were unavailable, but Matty Virtue was able to play having not appeared for Notts County last weekend, where he’s currently on loan.

Virtue gave the young Reds the lead in the first half, but two second-half goals from the visitors knocked Liverpool out of the Premier League International Cup at the quarter-final stage. Porto regularly threatened in attack and this meant that the ‘home’ side’s back line were called into action on numerous occasions. The likes of Conor Masterson, Neco Williams, Tony Gallacher, and captain George Johnston featured heavily.

Danubio Ribeiro had a couple of attempts of the visitors, one of which had to be collected from the stands by Liverpool goalkeeper Danny Ward due to the absence of ball boys behind the goal.

Johnston revelled in his role as captain, carrying the ball out of defence as well as making several interventions to halt Porto attacks.

Elijah Dixon-Bonner and Masterson were involved in a defensive mixup which almost let Madi Queta in, but Johnston was around to clear up the mess.

Williams bailed Ward out on one occasion as the defence helped each other out, and the Welsh right-back also made some good forays down the wing in attack.

He was lucky not to concede a penalty, however, as he tried to head a ball clear, but replays showed the ball hit his arm as he was trying to head clear, rather than it being an intentional handball. Bobby Adekanye created Liverpool’s first opening with a sprint down the left wing, beating his marker before crossing for Toni Gomes who headed over.

Gomes had another chance shortly after when Williams’ cross from the opposite wing landed at his feet in the area, but the striker couldn’t react quickly enough.

The Canadian was able to hold the ball up before finding Virtue who poked past the Porto goalkeeper.

Lewis almost doubled the lead with an excellent free-kick from 25 yards out which he hit well with his left boot, but it bounced clear off the inside of the post.

“Matty was a senior figure in a young team, and he played like a man,” said Critchley of Virtue after the game. The Winter Olympics may have finished last weekend, but the covering of snow which had rested on the pitch ahead of the second half made the playing surface quick and slippery one second then slow the next, as the ball held up in the slush.

This led to a scrappy second period during which Porto were able to find the equaliser through Bruno Costa, the 20-year-old played into a gap between Gallacher and Johnston before finishing powerfully past Ward.

Gomes was presented with another chance thanks to more good wing play by Adekanye, but couldn’t turn the ball in at the far post. Luis Mata had a chance at the other end but Masterson put in a full-blooded last-ditch block to save Ward some work.

Ward was forced into action shortly after, however, saving well from Mata, and minutes later had to make a good double stop from Joao Cardoso.

The most impressive save was to come as Santiago Irala headed goalward from the edge of the six-yard box, but great reactions from the Welshman saw him tip it over.

Successive saves followed, and Ward was getting a good training session as Porto piled on the pressure.

With 10 seconds of injury time remaining Porto finally got the goal. Mata worked his way down the right, crossed for Irala who put his header where Ward couldn’t reach it on this occasion.

It was a blow for the young Liverpool team, but it was a good effort in testing conditions.

“Second half we had to weather the storm a little bit,” added Critchley.

“We didn’t stop or defend crosses well all night, and unfortunately that’s what’s cost us the game in the end.”

The U23s return to domestic action when they play Leicester away in Premier League 2 on Monday.