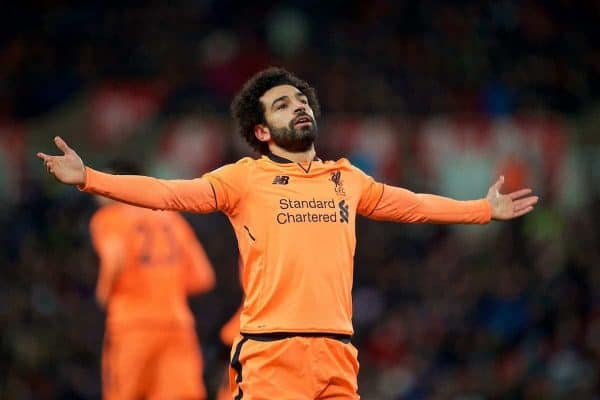 And the ex-Real Madrid star expects to see this season’s duel for the Premier League’s Golden Boot with Tottenham’s Harry Kane, who leads by one on 22, to be a regular occurrence.

Salah has been a sensation since his £38million summer move from Roma, scoring 28 in 34 matches, and his average of 93 minutes per goal is the best in the Premier League—four minutes better than Kane.

While such form in his first season is something of a surprise McManaman believes the Egypt international has all the attributes to make it a regular occurrence.

“He looks like he will score goals for a long time,” said the 45-year-old, speaking at a Liverpool Legends training session ahead of a meeting with their Bayern Munich counterparts at Anfield next month.

“You looked at Harry Kane three years ago and you thought ‘wow, he’s scored 25 this year’ and you always expected him to go on the following year and score another 25 because he is one of those centre-forwards.

“It was like when Robbie played or Michael; you always expected them every single year because of the movement and the goals they scored so to score another 25, no problem.

“And he [Salah] looks as if he will do it every single year now. If he keeps on settling in and improving you fancy him to score all the time.

“Every single game he just seems to be scoring and surprising everyone and even when he is missing chances he is in the right position.

“Harry is up there on his own—I know he has [Heung-min] Son or Dele Alli up there sometimes—but he is the focal point and a different type of centre-forward, albeit a fantastic centre-forward.

“Mo Salah will certainly score different types of goals to Harry Kane just because of the position and movement he has.”

Fowler, who scored 183 goals in 369 appearances for the Reds, said Salah’s record this season spoke for itself.

“I think it is fairly obvious for everyone to see. The pace he has means he will always get chances and he has managed to put a lot away,” he said.

“Alright he has missed some but I’d be more worried if he wasn’t getting them. You can’t argue with it.

“You look at the goal against Tottenham the other day and he had no divine right to score that one from where he was.

“But to manoeuvre his body to get into positions where he can get shots away I think is brilliant.

“A lot of the time he gets his shot away early and when a forward does that and the keeper is not ready you will probably score a lot more than you will miss.”