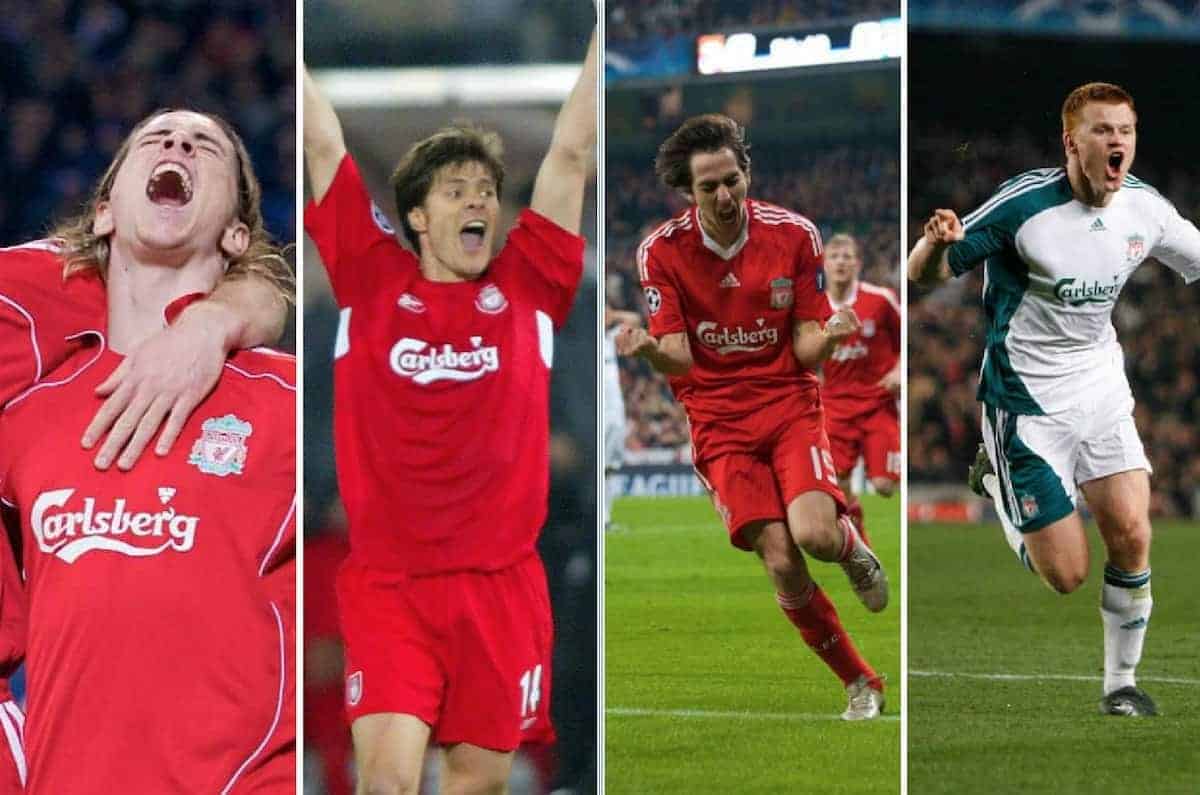 Liverpool enjoyed a European away day to remember Porto on Wednesday, but where does it rank in the list of great Reds away results in the Champions League?

Jurgen Klopp‘s side headed to Portugal expecting a tough challenge against a potentially dangerous Porto side, but they were magnificent at Estadio do Dragao.

Liverpool wrapped up the tie in the first-leg, strolling to a 5-0 win, and it immediately got us thinking about similarly superb away displays in the Champions League.

These have been judged on various factors, with the strength of the opposition, importance of the game and quality of Liverpool’s side at the time all taken into account.

This was a crucial group stage victory during Liverpool’s march to glory in 2004/05, having picked up just one win in their first three matches.

With Steven Gerrard and Xabi Alonso both absent, it was Igor Biscan who stepped up to the plate, bossing the midfield battle and playing a key role in the only goal – an own goal by Jorge Andrade.

Failure to win that night may have seen Rafa Benitez’s men fail to qualify for the knockout rounds.

Strength of opposition (out of five): 2
Importance of game: 3.5
Quality of Liverpool side: 3.5

This has to make the cut, even though Maribor are one of the worst teams Liverpool have ever faced in European competition.

The eventual 7-0 victory was the biggest ever by an English club away in Europe, and no side has won by a greater margin on their travels in the Champions League.

Strength of opposition: 1
Importance of game: 2.5
Quality of Liverpool side: 4 Benitez’s Reds were favourites to get the better of PSV Eindhoven in the 2006/07 quarter-finals, and they cruised to victory in the first-leg in impressive fashion.

Gerrard, John Arne Riise and Peter Crouch found the net – Riise’s was a trademark left-footed beauty – as another semi-final place was all but sealed.

Strength of opposition: 2
Importance of game: 4
Quality of Liverpool side: 4 The pressure was on Liverpool when they visited Marseille in December 2007, with a win guaranteeing them a place in the last-16.

They excelled on a nervy night at Stade Velodrome, with a lovely solo effort by Fernando Torres helping inspire them to a 4-0 victory.

Having looked down and out after picking up just one point from their opening three group games, the Reds were through.

Strength of opposition: 2.5
Importance of game: 4
Quality of Liverpool side: 4 Revenge was in the air when Liverpool faced Bayer Leverkusen in 2004/05, having been knocked out by the Germans at the last-eight stage three years earlier.

The Reds had already won the first-leg of this last-16 tie 3-1, and Luis Garcia’s early double put the contest to bed. A 3-1 win was secured in the end.

It was another positive step towards that famous night in Istanbul.

Strength of opposition: 3
Importance of game: 3.5
Quality of Liverpool side: 3.5

This is fresh in the memory, which can mean bias comes into play, but the way in which Liverpool destroyed a good Porto side makes this worthy of a place in the top five.

The attacking football on show was mesmerising, and a Porto defence that had conceded just 10 league goals all season could not handle Sadio Mane, Mohamed Salah and Roberto Firmino.

It was an almost perfect away performance in Europe.

Strength of opposition: 3
Importance of game: 3.5
Quality of Liverpool side: 4 The Reds may have beaten a strong Inter Milan side 2-0 at Anfield back in 2007/08, but they still had plenty to do in the return leg, having left it late to overcome 10 men.

The Nerazzurri‘s starting line-up included Javier Zanetti, Patrick Vieira and Zlatan Ibramimovic at the San Siro – they won the league that season – and Liverpool would have to stand tall to progress.

That did just that in expert fashion, and Torres’ ruthless finish three-quarters of the way through the game killed off their opponents’ hopes.

Strength of opposition: 5
Importance of game: 3.5
Quality of Liverpool side: 4

Trips to Santiago Bernabeu are about as daunting as you can get, and not many fancied Liverpool to prevail there in 2008/09.

That side was the Reds’ most complete since the glory days, however, and they were excellent against a Real Madrid team brimming with world-class talent such as Arjen Robben, Raul and Gonzalo Higuain.

Yossi Benayoun headed home the only goal of the night, sending the travelling fans into delirium, and a sensational 4-0 win back at Anfield saw the quarters reached yet again.

Strength of opposition: 4.5
Importance of game: 4
Quality of Liverpool side: 4 This may not have ended in a Liverpool victory, but it is one of the most impressive, gutsy results in the club’s European history.

The Juventus side they came up against were fantastic, and would go on to win the Serie A title in 2004/05, ahead of the Reds’ final opponents, AC Milan.

Having won 2-1 at Anfield, the Reds defended for their lives throughout and eventually picked up a memorable goalless draw that took them through to the semis. They did it all without Gerrard, with Carragher and Hyypia showing themselves as one of Europe’s best centre-back pairings.

Strength of opposition: 5
Importance of game: 5
Quality of Liverpool side: 3

Imagine going 1-0 down at Camp Nou to a Barcelona team containing Lionel Messi, Ronaldinho, Xavi and Deco – and winning. That’s what the Reds did 11 years ago.

This last-16 clash felt bleak when Deco headed the hosts in front, but instead of panicking, Liverpool recovered to produce a famous win.

The irony of Craig Bellamy and Riise scoring the goals was lost on nobody, following their golf-related fight, and it is a victory that will never be forgotten.

Strength of opposition: 4.5
Importance of game: 4
Quality of Liverpool side: 4

Havertz and Werner shine in Germany, as La Liga gets all-clear to resume

Havertz and Werner shine in Germany, as La Liga gets all-clear to resume