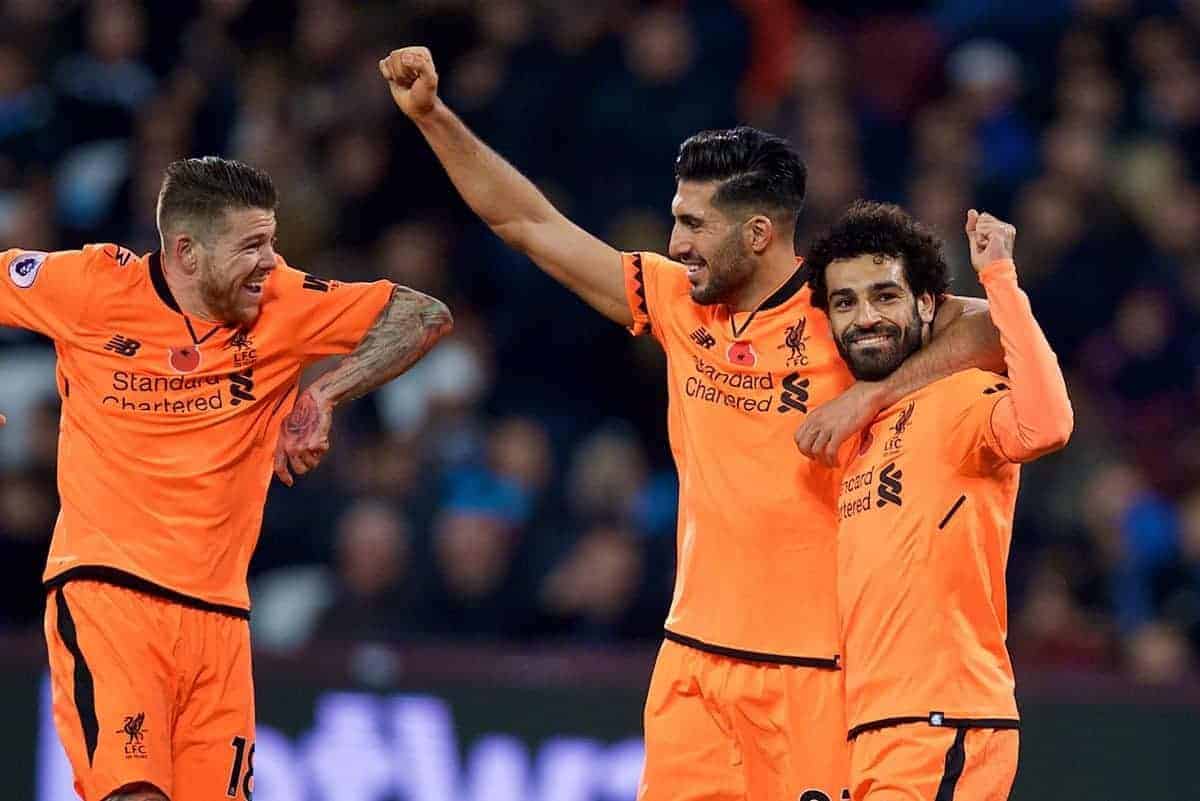 Liverpool host West Ham at Anfield for the 60th time on Saturday afternoon, having claimed 39 wins and just four defeats to the Hammers at home.

Earlier this season Liverpool won 4-1 at the London Stadium – the Reds’ biggest victory in 41 years at the home of the Londoners.

The last Anfield meeting (December 2016) saw the sides draw 2-2. Adam Lallana and Divock Origi scored for the Reds with first half goals from Dimitri Payet and Mivhail Antonio sandwiched in between.

Liverpool’s biggest home victory over West Ham in the League was a 6-0 win in April 1984. Ian Rush and Graeme Souness each scored twice with the others coming from Kenny Dalglish and Ronnie Whelan.

Salah has scored in each of Liverpool’s last 5 games. Daniel Sturridge was the last to scored for a sixth successive match (in a sequence of 7) in February 2014.

Salah and Firmino have scored 8 of the Reds last 10 league goals and in all competitions have netted 12 of the last 17 scored by Liverpool.

Roberto Firmino has scored 12 Premier League goals this season – his best tally in England, beating the 11 he scored last season. The best ever league tally in his career saw him score 16 in the Bundesliga for Hoffenheim in 2013-14. Liverpool are one goal short of recording 100 goals in a season for the 24th time and the first since 2013-14. This is their 40th game of the campaign and if the goal comes in the next 5 fixtures they will reach the century mark in the third fewest number of games in the club’s history.

Hat-trick at the back

The Reds could keep a third successive clean sheet in league and cup for the first time this season.

David Moyes has faced Liverpool 26 times in the Premier League, winning 3 – all with Everton. He has not won in the last 9 league meetings in his time with Everton, Manchester United and Sunderland.

Moyes has managed 14 times at Anfield during his career – presiding over 7 draws and 7 defeats. Only once in that time (with Everton in January 2011) has his team scored more than once in front of the Kop.

Since taking over the Scotsman has won 5 of his 16 league games taking 21 points from a possible 48.