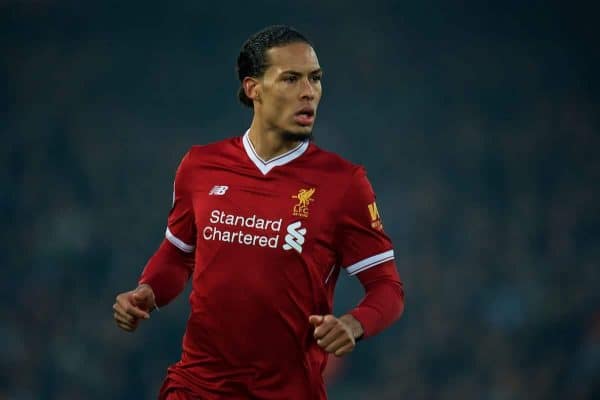 The arrival of Virgil van Dijk saw Liverpool finally add a commanding presence at the back, but he could still do with a similarly solid partner.

Dejan Lovren‘s issues are well documented, and though the Croatian has put in some decent performances on the right side of defence this season, the Man United game showed that big mistakes are always just around the corner.

Meanwhile, Joel Matip has also been struggling after an impressive debut season, and is yet to convince that he is good enough to partner Van Dijk in the long term.

Here’s a look at some players who have the potential to form a partnership with the club’s record signing in the back line for years to come.

A long-time target for those who like a bargain, Van Dijk’s compatriot has been heavily linked with a move to Inter Milan once his contract expires this summer.

With his reading of the game and passing ability, the Lazio man would be ideal to play in Liverpool’s high line, joining in with the buildup play from the back.

He played in midfield during his time in the youth sides at VV Spirit in his hometown Ouderkerk aan den IJssel, which helps him retain his composure on the ball when stepping out from defence into the centre of the park.

Like Matip back in 2016 he would be a great option on a free transfer, and could even be an upgrade on the former Cameroon international.

While all the attention is on De Ligt’s current Ajax partner Frenkie de Jong, the 18-year-old centre-back is going about his business in the usual accomplished fashion.

He is high on Barcelona’s list of targets, as the Catalan club continue to monitor the two Dutchmen in the heart of the Ajax defence, having missed out on Davinson Sanchez last summer.

It goes without saying that he’s good on the ball, having been developed at such a prestigious youth academy, but he also possesses deceptive recovery pace and can put in a tackle.

He’d need to bulk up for battles against the likes of Romelu Lukaku, Ashley Barnes, Salomon Rondon et al, but he’s already showing signs of improvement in this area.

He’s played on both sides of the defence, is similar in style to the next man on this list and could easily reach his level.

The Tottenham man has been one of the most impressive defenders in the Premier League since his arrival at Southampton on loan from Atletico Madrid in 2014.

Despite being born in Belgium, he is the third defender on this list to be schooled in the Netherlands, having made over 100 appearances for Ajax.

He possesses the ball-playing ability to go with the resolute defending for which he has become known during his time at Spurs.

Now 29, he is entering the prime years for a centre-back and will want a contract to reflect this, which has meant his future in north London is in doubt.

Judging on past performances in this division, he’s exactly the kind of centre-back Liverpool would need, but they’d have to pay accordingly in wages, even if the transfer fee wouldn’t be at Van Dijk levels.

If Liverpool were to sign a defensive midfielder in the mould of Wilfred Ndidi, then Gomez could come into his own on the right side of defence.

He’s impressed for England on the right of a back three, and this appears to be his best position.

But with an anchor in between them, Liverpool’s centre-backs could spread slightly wider, leaving Gomez free to roam into the right channel behind the full-back as he would in a three.

The World Cup could tell us more, but Jurgen Klopp and his staff will already know the strengths he possesses, and will hope that he’s improved enough to be a serious option for the first XI by the start of next season.

The Stuttgart man is similar to Gomez when it comes to versatility, and he has played at right-back as well as centre-back in a back three and a four for two different managers at Stuttgart this season.

The 22-year-old Frenchman is a good all-round defender, and likes to look for a forward pass once he wins the ball back.

He is similar in style to the likes of Cesar Azpilicueta and former Liverpool utility defender Alvaro Arbeloa, but his extra height at 6’1″ makes him more suited to playing centre-back than the Spanish pair.

He has a handful of assists from the right-back position, and has also played the odd game as a defensive midfielder for Stuttgart and for former club Lille.

Initially, he may be more useful as a backup player across the defence rather than an immediate partner for Van Dijk, but over time he could emerge as a mainstay in the Liverpool back line.

Long touted as one of the best and most promising centre-backs in Germany, now could be the time for Tah to begin to show his worth.

He’s been compared to the likes of John Stones and Raphael Varane, and should he learn to use his considerable 6’4″ frame to complement his skills in other areas of the game, then he could be, like the Real Madrid man, the complete defender.

He still has plenty of improving to do but the potential is there, and he’s already at a level where he’d get into the Liverpool side ahead of Matip or Lovren.