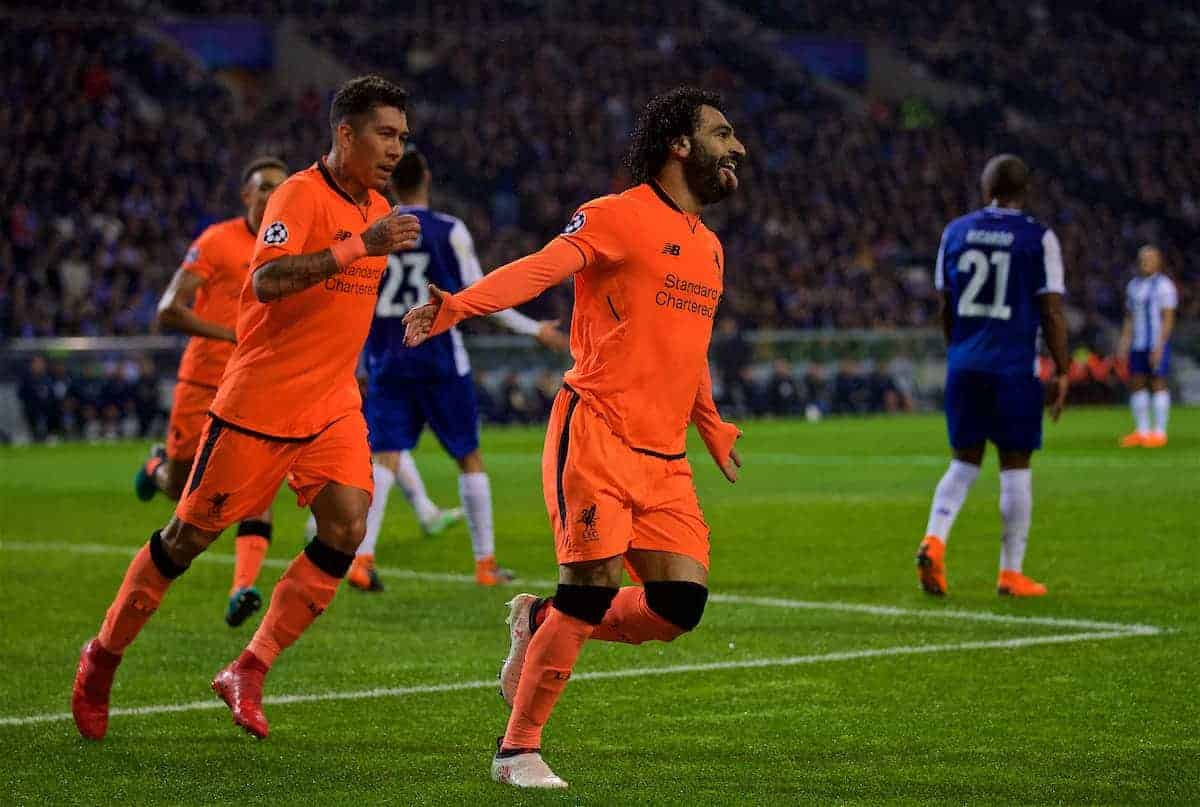 Liverpool take a 5-0 lead into Tuesday’s Champions League clash with Porto, with anything other than progression to the quarter-finals unthinkable.

If ever a European knockout game felt like a dead rubber, it’s this one.

That may feel like needless overconfidence, but with the Reds 5-0 up and their opponents rumoured to be switching their focus to Primeira Liga duties, it’s hard to see anything other than a comfortable stroll into the last eight.

The Reds were magnificent in the first leg in Porto, and it has afforded Jurgen Klopp the luxury of resting key men, should he feel the need to.

Football can be a crazy game at times, but Liverpool are a team in a very good place.

Saturday’s 2-0 win over Newcastle United at Anfield was another strong showing, and they now look like a side confident they will win most matches.

Confidence is flowing through the players, and there is no reason why they cannot go far in this season’s Champions League.

This may not prove to be a classic Anfield night in Europe, given the one-sided nature of the tie, but another win would keep the momentum going nicely.

With each week that passes, the more impressive Klopp’s Liverpool look. As touched upon, Klopp may ring the changes on Tuesday, especially with this weekend’s vital trip to Man United fast approaching.

There are still no injuries to report, so giving peripheral figures some playing time feels like the order of the day.

Joe Gomez and Alberto Moreno are likely to come in at full-back, and Dejan Lovren and Virgil van Dijk could be given the night off, with Joel Matip and Ragnar Klavan replacing the pair.

In midfield, Klopp might turn to Gini Wijnaldum and Adam Lallana, both of whom need some minutes under their belt, while Danny Ings and Dominic Solanke will be desperate for a start in attack.

It would be a shock if the likes of Mohamed Salah, Sadio Mane and Roberto Firmino are not rested, having featured so prominently this season.

Porto’s injuries are racking up, with key man Danilo out, as well as Alex Telles, Moussa Marega and Tiquinho Soares, though Vincent Aboubakar is set to return.

When Liverpool strode out at Estadio do Dragao last month, there were plenty of experts tipping them to struggle against a highly rated Porto team.

The gulf in quality was enormous, however, as the Reds picked up one of their most conclusive away results of all time in Europe.

Klopp’s men actually made a slightly shaky start, but once they found their feet they thrilled the travelling supporters with their attacking class.

Mane fired Liverpool in front with the help of some poor goalkeeping by Jose Sa, before Salah’s superb ball control allowed him to finish from close range.

A wonderful counter-attack led to Mane making it 3-0 after the break, before Firmino was rewarded for a magnificent display, firing home to add a fourth.

Mane completed his hat-trick in style from distance, capping off a memorable evening in Portugal.

Nobody has more assists in the Champions League this season than James Milner, with the 32-year-old registering six in total, including two in the first leg against Porto.

That’s two more than the next players on the list—Man City‘s Kevin De Bruyne and Tottenham‘s Dele Alli. Speaking at Melwood on Monday, Klopp was coy about how many changes he would make, but did hint at rotation of some kind:

“I haven’t made a decision so far. It’s about bringing in fit players,” Klopp told reporters.

“We are in the moment in the league where we all have to deliver, play constantly, stuff like that. You don’t rotate to avoid something, you only use the players that are in the best shape.

“If it will be a different lineup to Saturday I don’t know, but it would only be because we want to win the game.

“That’s what I meant when I said we won’t rest players, we may make one, two or three changes, but only to win the game.”

James Milner was also on press conference duty, and he touched upon Liverpool’s improved professionalism during matches:

“Over the past few months we’ve improved our game management,” he said.

“There are times when you might have to play behind the ball and hold an extra midfielder back.

“When we conceded against West Ham, we responded well. It was a sign of maturity, and we’re improving at it all the time.”

Henry Jackson returns to our live blog from 7pm, as he talks you through the action and keeps you entertained throughout the evening.