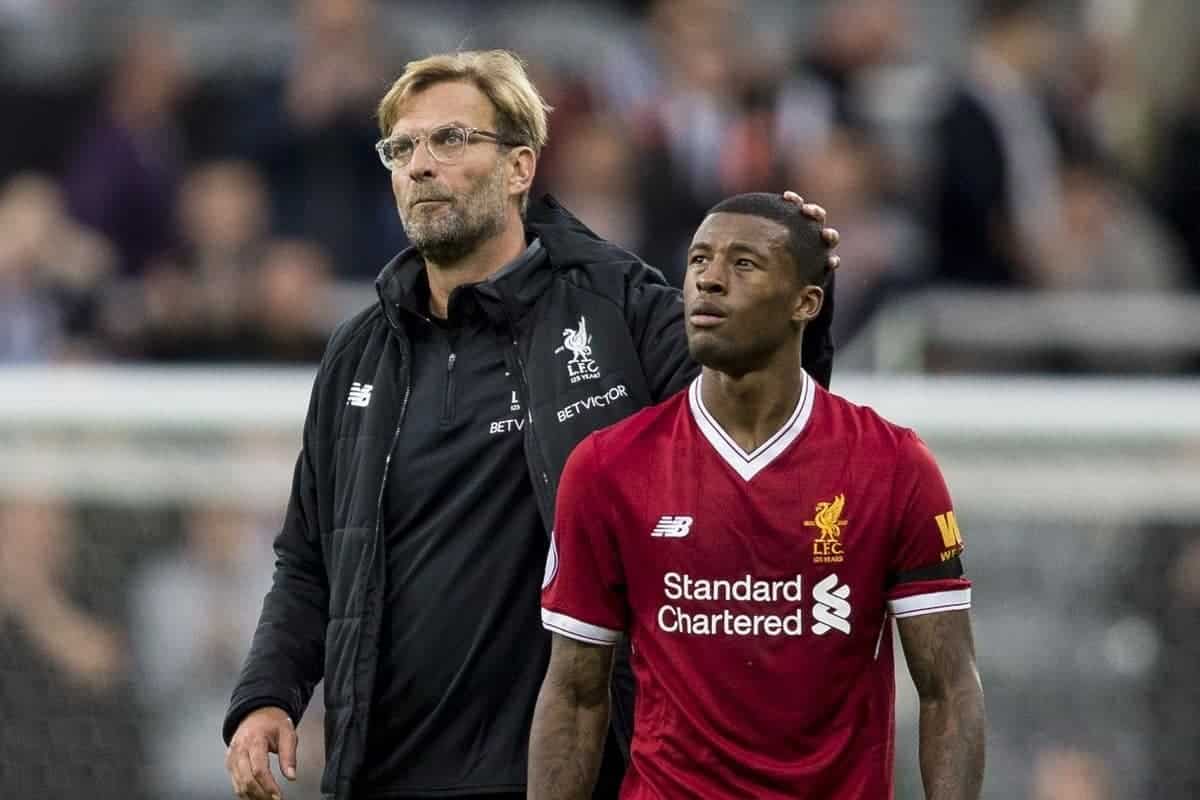 Jurgen Klopp has revealed that James Milner, Georginio Wijnaldum and Ben Woodburn are all doubts for Liverpool’s clash with Newcastle United.

The Reds welcome Rafa Benitez’s side to Anfield on Saturday evening, looking to extend their unbeaten run to five games and maintain their top-four push.

Kicking off a crucial week that will see them take on Porto (March 6) and Man United (March 10) in the Champions League and Premier League respectively, victory in this game is essential.

Performances over the past two games in particular, beating Porto 5-0 and West Ham 4-1, highlight a side in excellent form.

And largely Klopp is able to call upon a healthy squad, though speaking to reporters on Friday he revealed that Milner, Wijnaldum and Woodburn should be considered doubtful.

He also provided an update on the fitness of Nathaniel Clyne who, despite playing the full 90 minutes in the U23s’ 4-0 win over Stoke City last week, will not be involved.

“In a very serious situation with no other right-backs we could bring Clyney in,” he said.

“Milly took a real knock in the last game. We will see how it improved—it’s not an injury, but it’s a little issue.

“Hendo is fine, trained completely normal, all good. [It has been] a really good week for him—the best three or four weeks now.

“Danny Ings came back [from illness], he didn’t have the same as [Wijnaldum and Woodburn]. The other two boys had diarrhoea!” After a short break in Marbella at the end of February, Klopp and his squad are now forced to contend with miserable conditions as snow continues to fall on Merseyside.

He admitted this had caused issues on the training pitch, but suggested it could work in the Reds’ favour this weekend.

“You cannot do exactly what you would do [normally]. It was really too cold, not good for muscles,” he explained.

“We changed the programme. We had to do lively tactical training.

“It is very often talking on the pitch, ‘wait, stop, hear this’. We didn’t do it on the pitch to be honest. We had training and spoke about it inside.

“The snow was not a problem for one day, I thought it was nice. There was nothing on the pitch, the boys here did a fantastic job.

“It’s good because it will be the same circumstances tomorrow, it’s the best preparation you can get, you get used to it. It’s not that bad, it’s different.”