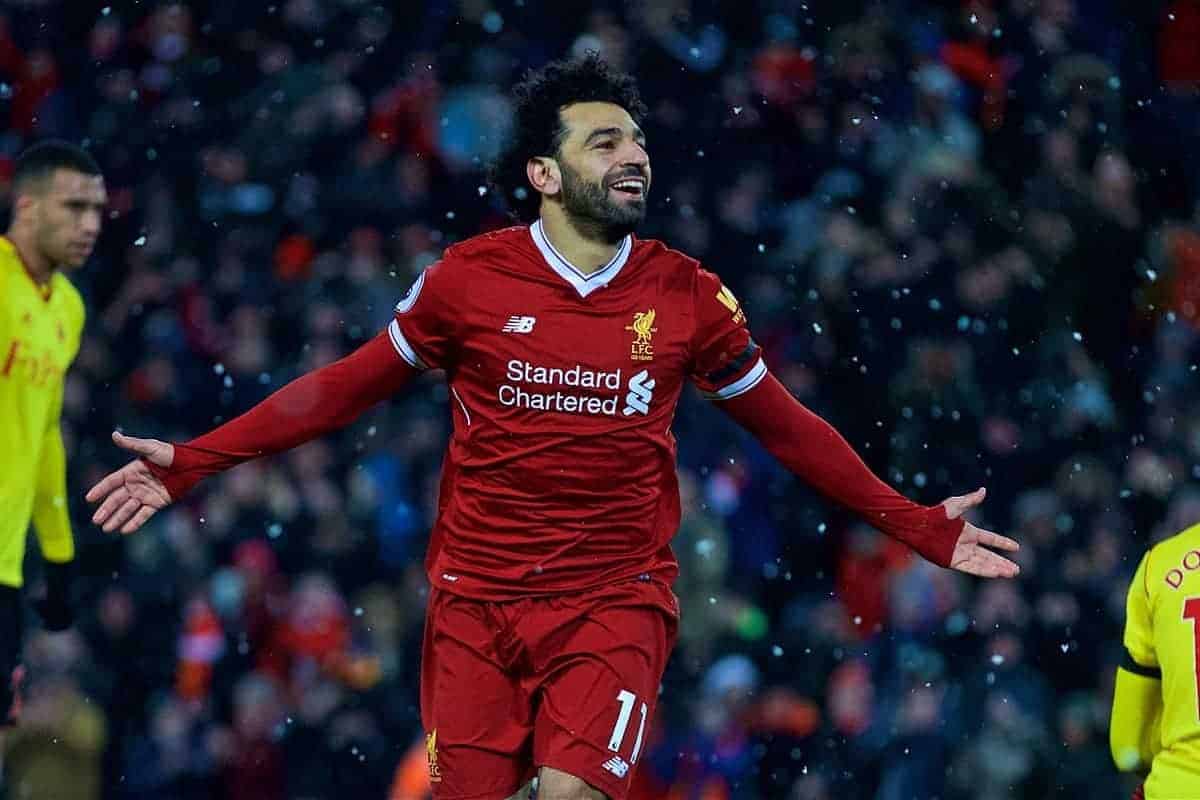 Mohamed Salah’s four-goal haul inspired Liverpool to a stunning 5-0 thrashing of Watford, much to the delight of Reds supporters.

It was all about proving defeat at Old Trafford was nothing more than a minor speed bump, and the Reds did that with a Salah-inspired win over the Hornets.

Salah’s brilliant solo effort for his 33rd goal of the season put Jurgen Klopp’s side ahead, before the Egyptian tapped in for his 34th just before half-time to double the lead.

Shortly after the restart Roberto Firmino added a third to wrap up the victory, turning home Salah’s cross with a magnificent back-heel at the Kop end.

The Egyptian put the icing on the cake as he netted his 35th and his first Reds hat-trick, slaloming through the Watford back line and rolling into the net.

But Salah wasn’t finished yet as he incredibly added a fantastic fourth lashing home from close-range on a truly memorable evening.

Here’s how supporters reacted to the win across social media and on our forums, with huge praise coming for one man in particular.

The Egyptian King was lauded…

This, by Salah, is one of the best individual performances by a Liverpool player I’ve ever seen. No exaggeration. Sheer genius in everything he does.

Just give the Salah Ballandor He’s humiliated every team that’s come in his way!

Congratulations to everyone who has Salah as their fantasy football Captain! pic.twitter.com/1qYuUYxfMJ

Snow is falling, all around me, players playing, having fun – It's the season for love and understanding – Salah four, Watford none. 5:0 #LIVWAT

BUILD HIM A PYRIMAD IN THE CITY CENTER, BUILD IT

Player of the Year without doubt.

It really is Salah FC. pic.twitter.com/tghCdGwfcj

More individual performances were praised after an excellent team display…

This may be pushing it, but Andy Robertson’s the sort of transfer that everyone should celebrate. Shows it’s not all about paying premium fees. Spotting the right player, allowing him time, coaching him well still goes a long way.

Good shift from Gini today, one of his better performances of late.

Gomez has used width & played more advanced than before he came out of the team. Seems like he's recognised why Trent was keeping his place & is finding a nice balance between defence & attack.

Firmino is basically a defender, midfielder and striker rolled into one; relentless in the press, has a clear eye for a pass and strong creativity while possessing the ability to score some outrageous goals. Phenomenal.

#Klopp giving #Ings a big hug there. Probably a few words on his performance since coming on, he was fantastic. #LFC

It's a sad day for Richard Keys, as Everton can no longer finish above Liverpool this season.

His early call proved to be inaccurate. Ah well.

“These 5 goals will will help with the goal difference when it comes to our place in the table. We are better than Spurs on this. Well done lads. You were wonderful tonight.”

– Maria on the forums

Perfect performance from the lads. Man of the match performance from Salah. What a bargain he and Robo are turning out to be. Long let it continue. International break coming at the wrong time once again.

Never has a routine 5-0 against poor opposition felt so significant. Something amazing is happening here allez allez allez