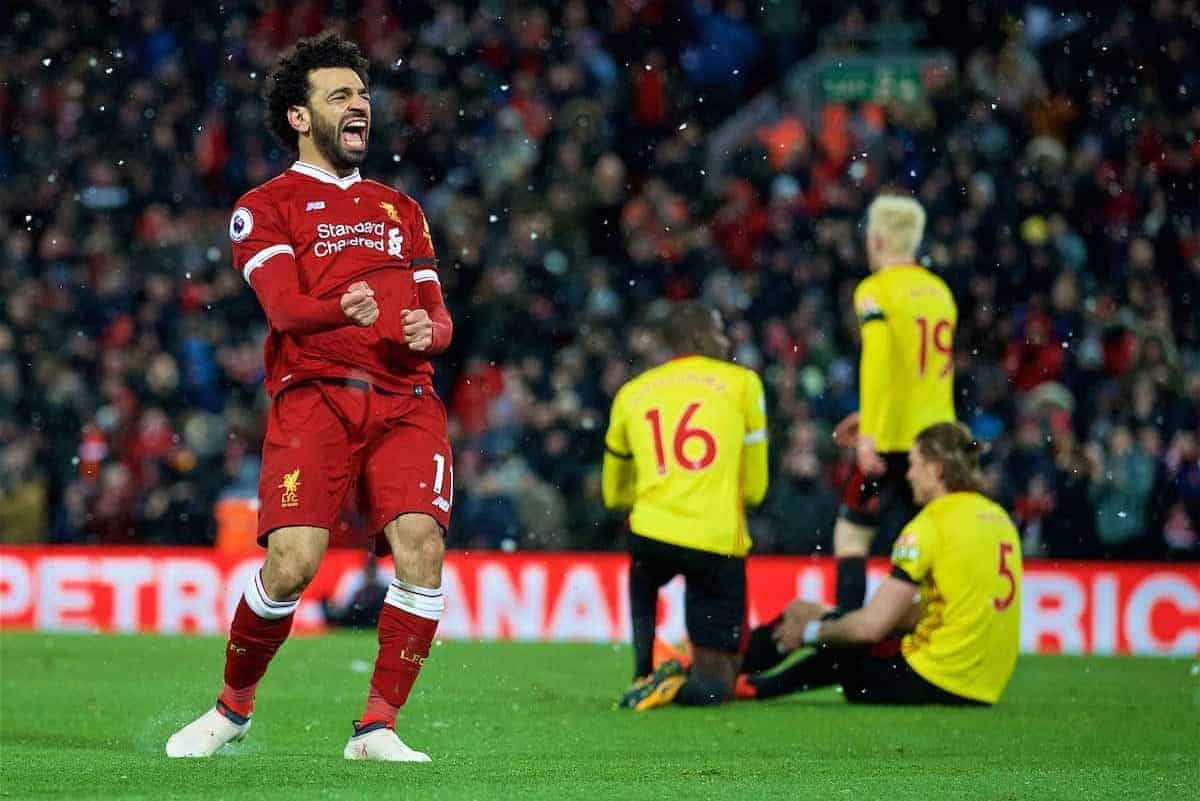 Mohamed Salah struck four times as Liverpool brushed past a struggling Watford on Saturday, securing a 5-0 victory in the Premier League at Anfield.

With top-four rivals Man United, Tottenham and Chelsea all in action in the FA Cup quarter-finals over the weekend, the Reds’ clash with Watford provided a vital opportunity.

The Hornets’ arrival at Anfield came on the back of a 2-1 loss for Jurgen Klopp‘s side at the hands of United seven days previous, highlighting the need for a response.

Fortunately, Liverpool found themselves in excellent shape ahead of their final game before the March international break, with only Dejan Lovren missing out due to injury.

Watford suffered a 3-0 loss to Arsenal the last time out, providing Klopp with the blueprint for another convincing win, and they undoubtedly managed that. The Reds got off to the perfect start as the snow fell at Anfield, with Salah replicating his solo goal against Tottenham as he bamboozled the Watford defence to open the scoring on four minutes.

Continuing to dominate, Liverpool’s rhythm took a blow as Emre Can was forced off the field through injury on the half-hour, with James Milner taking his place.

Watford grew into the game as mistakes crept into the hosts’ midfield, and Loris Karius was forced to make his first save of the day to deny Richarlison.

At the other end a brilliant counter-attacking move led by Salah almost saw Roberto Firmino double the lead, but Orestis Karnezis was there to make the stop.

They didn’t have to wait long for another, however, with Salah on hand to make it 2-0 after Andrew Robertson‘s stunning cross from the left flank.

After scoring within four minutes in the first half, Liverpool did the same after the break, with Salah turning provider for Firmino who back-heeled the Egyptian’s clipped cross home in sublime fashion.

The Reds were first to everything throughout, producing an excellent response to their defeat to United as they managed the game perfectly.

Klopp made his second change of the evening with 20 minutes left to play, as Alex Oxlade-Chamberlain took to the field to replace Georginio Wijnaldum, providing further thrust from the middle of the park.

The England midfielder stung the palms of Karnezis with a long-range effort as the Reds pushed for another, but it was Salah who extended the lead.

Picking up the ball from Sadio Mane, Salah evaded three Watford defenders with a single turn, with his shot eluding the goalkeeper to creep in for his first hat-trick for Liverpool.

And he wasn’t done there, slamming the ball into the back of the net after Danny Ings‘ shot was spilled into his path, notching his fourth goal of the game and sealing a 5-0 win.