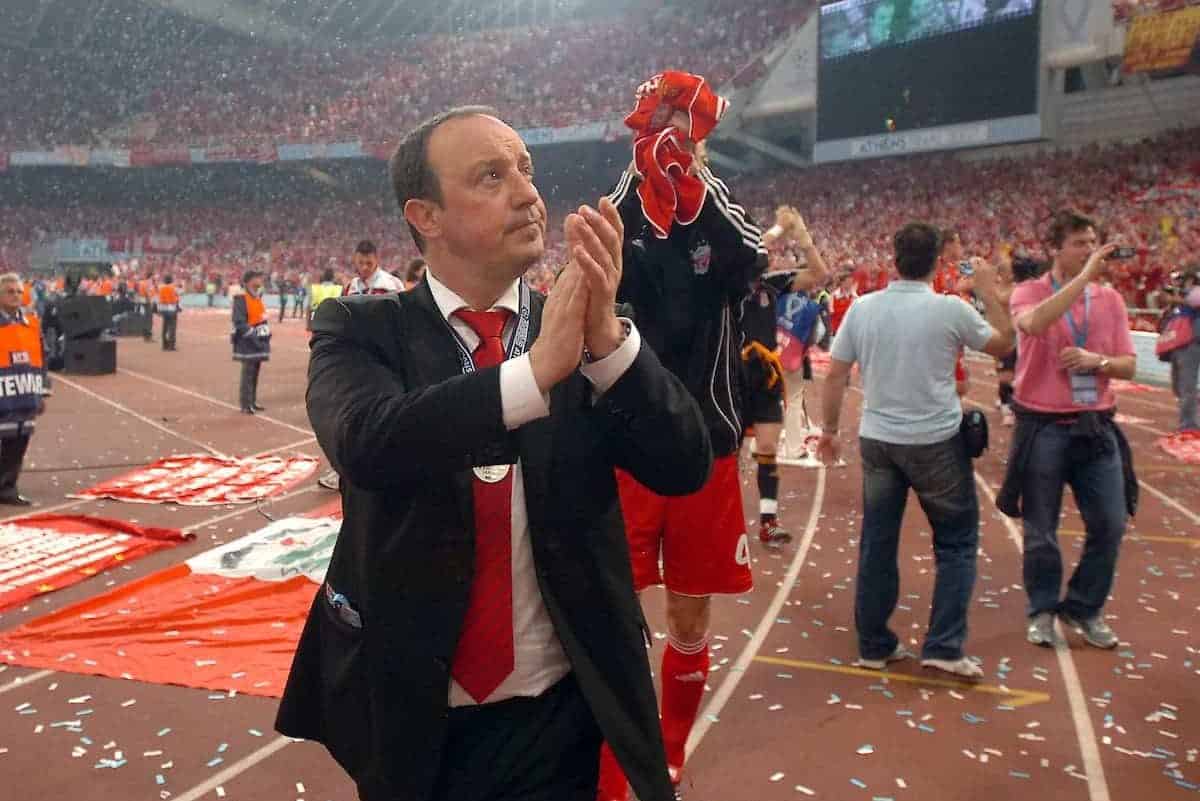 Despite closing in on a decade since he left Liverpool, Rafa Benitez’s strong connection with the club remains, as Neil Poole recalls in a close encounter.

On the afternoon of November 5, 2014, sitting alone in the dark, eating snacks while observing death and misery I received an unexpected phone call from a man I didn’t really know about a man I wanted to know.

You can’t remember what you were doing on the afternoon of November 5, 2014. I’ll jog your memory.

It was probably one of two things: convincing yourself that dropping Steven Gerrard and only losing 1-0 to Real Madrid was an achievement and all part of Brendan Rodgers’ European masterplan; the start of a learning curve inevitably leading to his mastery of tactical knowhow in Europe.

Anyone see Zenit vs. Celtic the other night?

Or you were dismayed that we’d dropped Steven Gerrard, rolled over after being out of the Champions League for years, let Madrid tickle our bellies and that it was all a perceived achievement.

I was in the latter camp, so like any rational adult I took half a day’s annual leave off work, went to the pictures on my bill, bought a bumper pack of reduced price Maltesers from B&M for comfort-eating purposes and watched Brad Pitt shoot people with a tank. This is what the Reds drive me to.

Brad had just slaughtered someone. I popped a Malteser in my mouth. The phone rang.

“Did you email Rafa Benitez?”

Having actually emailed Rafa Benitez as accused, it’s important to note that to my slightly embarrassed 36-year-old ears this question was heard as: “Did you email Father Christmas to ask if him he knew where the Tooth Fairy lives?”

I won’t drop names, but a kindly man who I knew in a virtual sense from the bit of Liverpool writing I’d done knew Rafa and knew the man who had ended up in possession of my email.

The said email was a shot in the dark asking Rafa if he’d fancy answering a few questions for a fanzine feature about the 2004 Liverpool vs. Olympiakos game. I really never expected a reply.

I’ll never know how I was vetted but I like to think the conversation between Rafa’s man and ‘my’ man went something like:

“His name rings a bell.”

A week or so later, armed with a print-out of questions to be checked, I went on down to bare-bricked office in the shadow of the Anglican Cathedral and had my ‘meet’. The general sense was that Rafa would be OK with answering all but one of the questions. They would be passed on and if he had a chance, Rafa might be able to jot down a few sentences and they would be forwarded on to me.

I was more than happy with this arrangement and still starstruck by even indirect contact.

Late on the following Sunday I then received an email: “Can you come down to tomorrow at 11 o’clock? Rafa is in Liverpool and he wants to have a chat with you.”

And then I was gutted. More accurately and in local parlance, I was ‘devo’d’.

To cut a long story short I had to go down to London the next day due to work commitments. There was absolutely no way I could get out of it.

With heavy heart I had to say no to Rafa. He was probably gutted too. I still am truth be known.

I appreciate that this tale may seem somewhat underwhelming.

After all, with the explosion in popularity of ‘fan media’ over the last five years or so, there’s a host of big, successful Liverpool FC fan sites across different media platforms which have deservedly earned recognition and good reputations.

We almost expect to be able to read, see or hear interviews with Liverpool players and managers past and present on these sites.

But context is king here for my emotional rise and fall to make any sense. If the Liverpool fan sites you know are powerful stallions, galloping impressively across a windswept beach like Black Beauty and wowing onlookers, my nascent fanzine was like a new-born foal staggering on stick thin legs with its eyes glued together with equine womb-juice.

See it on Countryfile while having their tea, most people are going to look away. And they did.

Appreciate that the fanzine was very small-scale. I used my children to lick envelopes for the copies I posted out.

It was made using Microsoft Publisher for God’s sake! And my maths was so bad that I had to sell out each of the first five issues just to break even. You haven’t heard of it and you probably hadn’t when it was out.

Although boss and possibly the best thing in the world, ‘like, ever’, the fanzine wasn’t known and had no reputation to speak of. Sammy Lee hadn’t tested the water first. It had never contained an interview with anyone connected to Liverpool FC. Yet there he was mid-season undoubtedly with Serie A games to plan for and I would imagine other things to do with his life, willing to give up his time and afford an interview to fan of a club he used to manage, who was cobbling together a fanzine he had never heard of.

You have to admit, that is pretty sound.

There are plenty of people, including Liverpool fans who can’t fathom the Rafa love-in. Some of my best friends don’t like Rafa.

And although my tearful “it will take us years to recover from this, just you watch, you wanted this. This is what you wanted?! Just you wait and f*cking see” sacking-of-Rafa speech was a sight to behold, I’ve learnt to walk amongst you naysayers.

This small tale, this small thread makes up part of the intricate rich tapestry of Rafa’s bond with Liverpool fans to this day. Think of it as part of a rich Rafastry!

Football is an emotive game and it’s as much about the off-pitch stuff that draws us in. Rafa is the king of off-pitch stuff! From knowing needle with the blue half of the city during his time as manager to standing up against Hicks and Gillet to his support of the Hillsborough families and the Hillsborough campaign.

It’s all the things you would do. They say opposites attract but the reality is similarities attract more.

My little story adds to that. You’d probably take some time out to help out a fellow Red wouldn’t you? You wouldn’t mind having a chat about the Olympiakos game would you? Rafa is the same. The connection is made.

And ultimately we did chat about Olympiakos in a roundabout way. Despite me standing him up, shortly after, I received an email out of the blue. He’d replied to all of my questions.

You see, he’s still a Red really. And he knows where the Tooth Fairy lives.